Since signing for Tottenham in the summer of 2020, Pierre Emile Hojbjerg had started in 52 consecutive matches in the Premier League up until Antonio Conte rotated the squad back in December. The Danish midfielder has been a prominent part of Spurs midfield amidst multiple managerial changes. He made 38 appearances in the league last season, scoring twice and laying four assists. Hojbjerg followed up on his strong individual form last season, and he has currently made 20 appearances in the league.

Despite starting in the majority of games in the league, Hojbjerg’s recent form has been below his usual standards. Playing in the vast majority of the games has seemed to have taken a toll on the Danish international, and he has struggled. Some pundits have even claimed that Hojbjerg could lose his place in the starting XI following Rodrigo Bentancur’s arrival from Juventus.

During Spurs’ 2-3 defeat in the league against Hojbjerg’s former club, Southampton, Conte was frustrated with the midfielder and took him off after 58 minutes, replacing him with Rodrigo Bentancur. While the Danish international started the game brightly, delivering the cross for Spurs’ first goal, he was sloppy in his passing, and Tottenham struggled to keep possession of the ball in the midfield. Additionally, Hojbjerg was underwhelming in his defensive work, failing to make a single tackle in the midfield.

Hojbjerg’s poor performance in the game against Southampton led Conte to drop him in Spurs’ recent 0-2 defeat at home against Wolves. Hojbjerg was left out of the starting XI for the match as Conte started Bentancur alongside Winks in the midfield pivot.

Let’s take a look at his stats to gauge his performances this season. 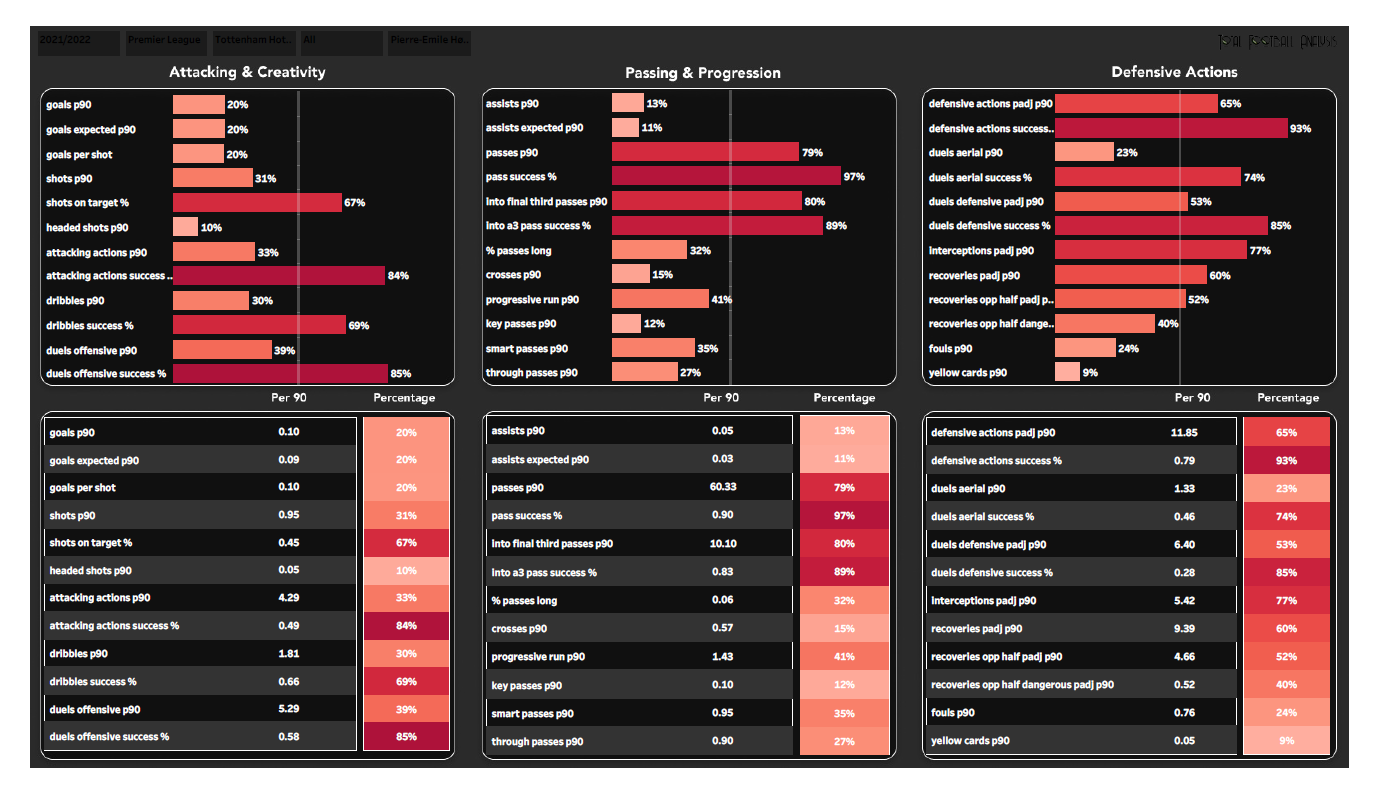 In the above viz., we can see Hojbjerg’s overall stats in the league this season. His mixed stats are evident at a glance, suggesting that the midfielder has suffered a decline in his form. In terms of passing & progression, the majority of his stats are below the league median. Although his passing success rate is one of the best in the league, the Danish midfielder has been poor in his passing in the recent games. In terms of his defensive stats, Hojberg has managed above-average stats in most of the metrics. His most notable defensive stats are successful defensive actions and successful defensive duels. He is known for being press resistant and rarely giving the ball away. However, the 26-year-old has lost possession many times in recent matches. 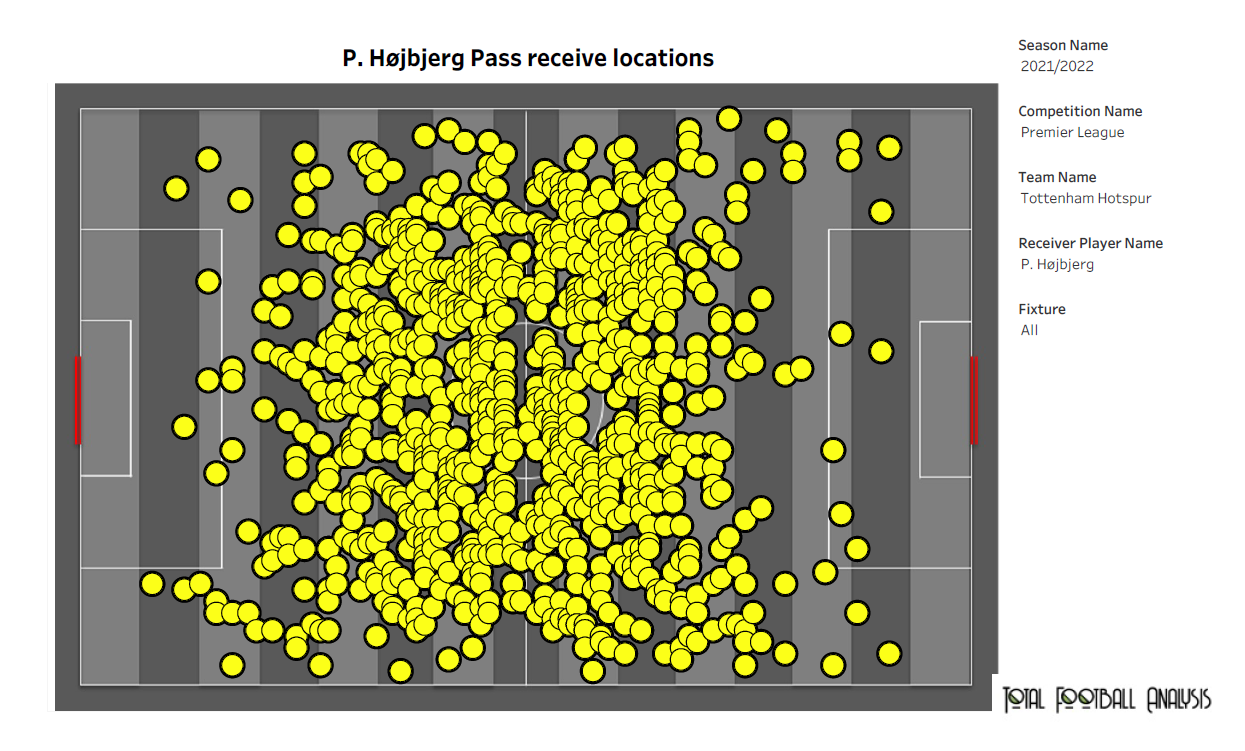 The above viz. highlights the location where Hojbjerg has dropped to receive his passes. We can see that the midfielder has been mobile and has covered the entire pitch to receive passes. The Danish international has been described as an intelligent midfielder who is positionally aware, dropping into different positions to receive the ball. Although he is not known for his ball-carrying ability, Hojbjerg is capable of progressing the ball into the final third. His role is pivotal in the Spurs’ transition from defense to attack. 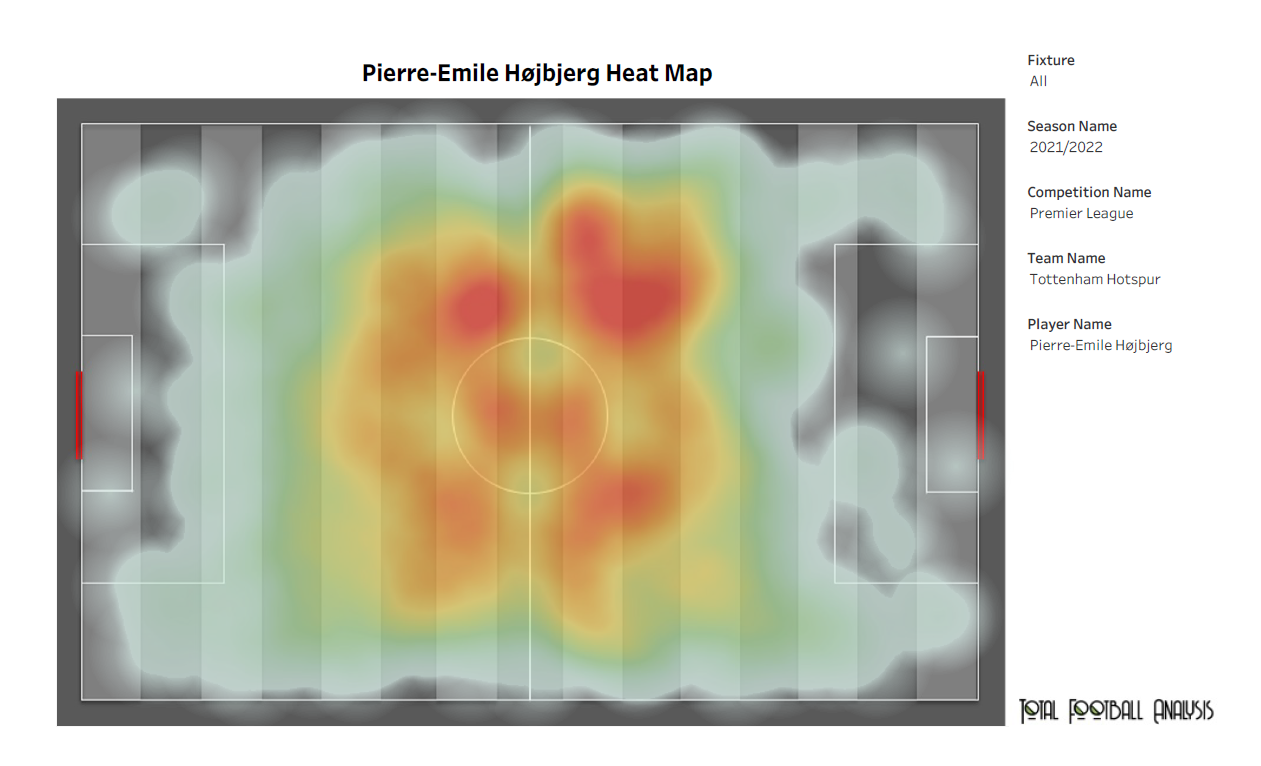 We can see the areas of the pitch where Hojbjerg is active in the above viz. The 26-year-old is intelligent, displaying excellent stamina and work rate. He is known for covering vast spaces on the pitch, as indicated by the above viz. One of Hojbjerg’s best attributes is breaking up the opposition attacks and linking up with his teammates. Under Conte, Hojbjerg has been a regular feature in the midfield up until the game against Wolves where he was benched. The midfielder’s difficulty in holding on to the ball has been a cause of frustration for his manager.

Hojbjerg has been an immense presence in Tottenham’s midfield since joining in 2020. The sheer number of games that the 26-year-old has been involved in is a testament to that presence. While his stats do not indicate a massive decline in his form, Hojbjerg has underperformed this season, and it is evident that he is in dire need of rest. A spell on the sidelines might help the Danish midfielder to rediscover his best form.