One of the many players who have improved since the arrival of Conte at the Tottenham Hotspur Stadium is Ben Davies. The Welshman, who was a backup left-back under Nuno, has been turned into one of Conte’s main three centre-backs. Davies has featured regularly under Conte in the Premier League and has quickly become his manager’s go-to left-centre-back. In addition to cementing his place in Spurs’ starting line-up, Davies has also been one of his side’s most influential players.

Davies’ adjustment to his new role has been remarkable. He has formed an excellent defensive partnership with Eric Dier, while he also links up well with Reguilon on the left flank. Conte has stated recently that Davies is among the players who have improved the most. The Welshman himself has remarked that his side are enjoying the work under the Italian manager, and it is exactly what they needed.

So far, Davies has made 11 appearances in the Premier League, starting in 10. Recently, there have been talks of Tottenham adding another centre-back to their ranks. Being his side’s only left-footed defender, Davies was chosen by Conte for the role of a centre-back, and he has delivered. However, it would be important for Spurs to have a left-footed defender as a backup option as well in case of an injury to the Welshman. Despite featuring regularly, Davies has not shown any signs of slowing down and has maintained his fitness and form. He was impressive in Tottenham’s recent 3-1 win over Brighton in the FA Cup and was rarely troubled defensively.

Let’s take a look at his stats to gauge his performances in Conte’s back-three system. 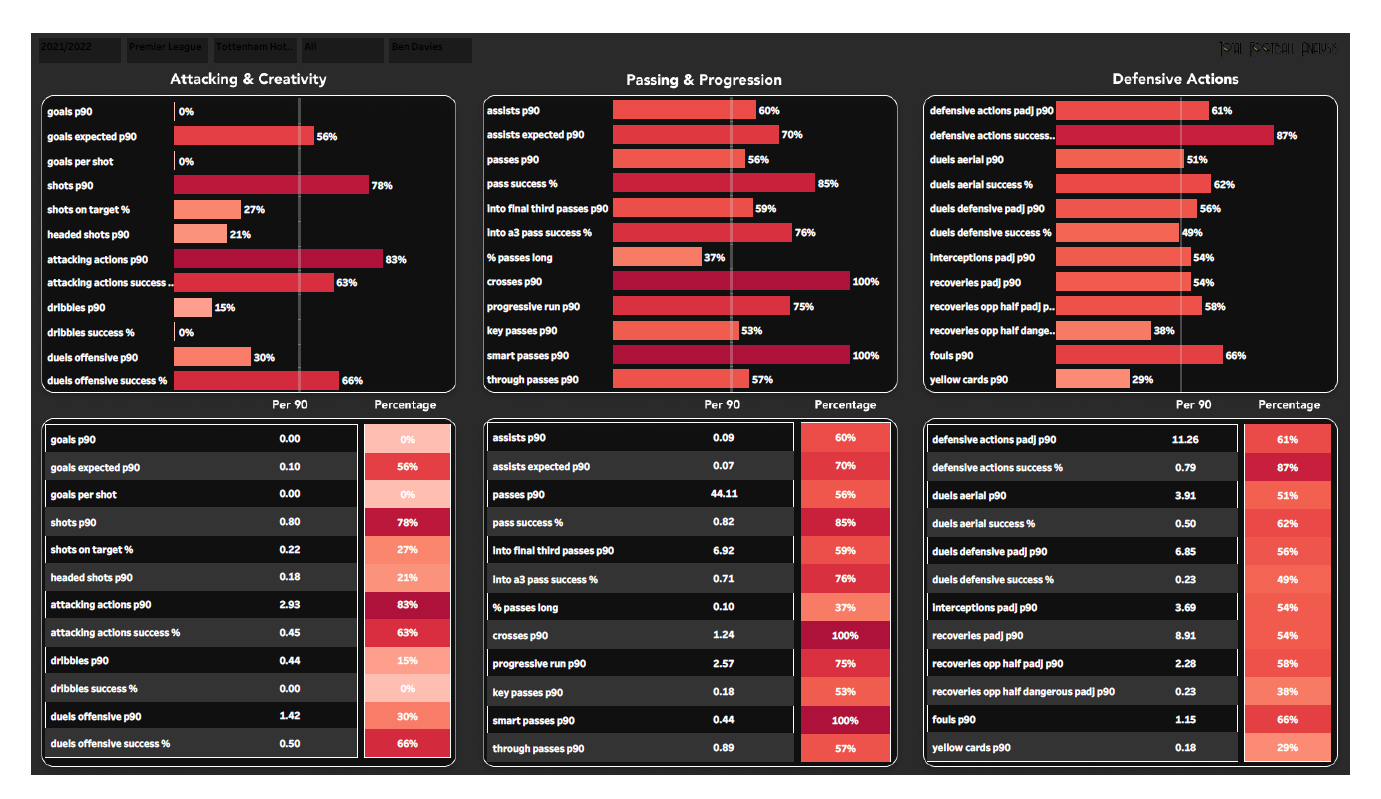 In the above viz., we can see an overview of Davies’ stats. The majority of his defensive stats surpass the league median, indicating an overall solid display at the back by Davies. His most notable stats are successful defensive actions and aerial duel success rate. In addition to his defensive work, Davies has been afforded the freedom to progress the ball under Conte and is important for his side’s build-up from the back. We can see that he has fared well in terms of passing and progression stats as well. Davies’ passing success rate of 85% is impressive, and he has also been excellent with his passes into the attacking third and average progressive run per match. 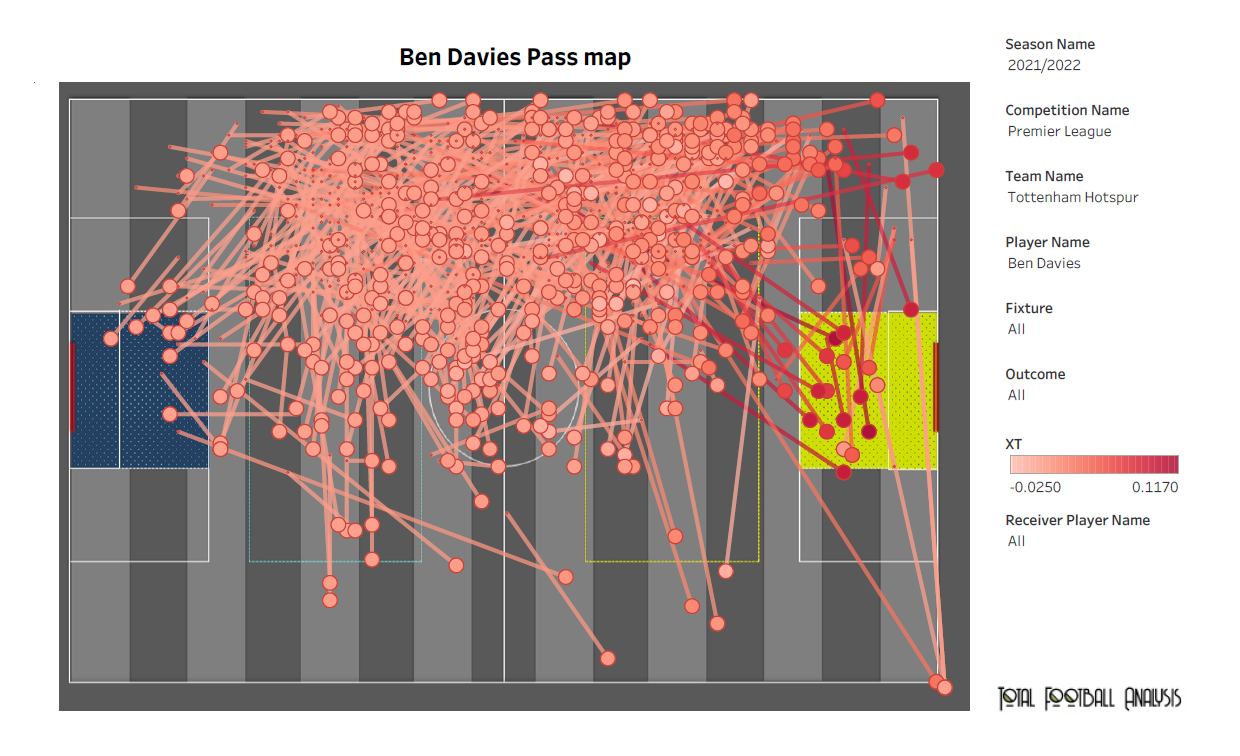 The above viz. highlights the location of passes that Davies has delivered. His pass map further indicates that Davies has been impressive with his passing. We can spot multiple threatening crosses and passes from the left wing into the opposition box. Davies’ movement in higher areas of the pitch is also evident from the above viz. The Welshman has been effective when Spurs are trying to counter or are in transition as he is adept at finding the passing angles and can pick Spurs’ forward players with his passes. 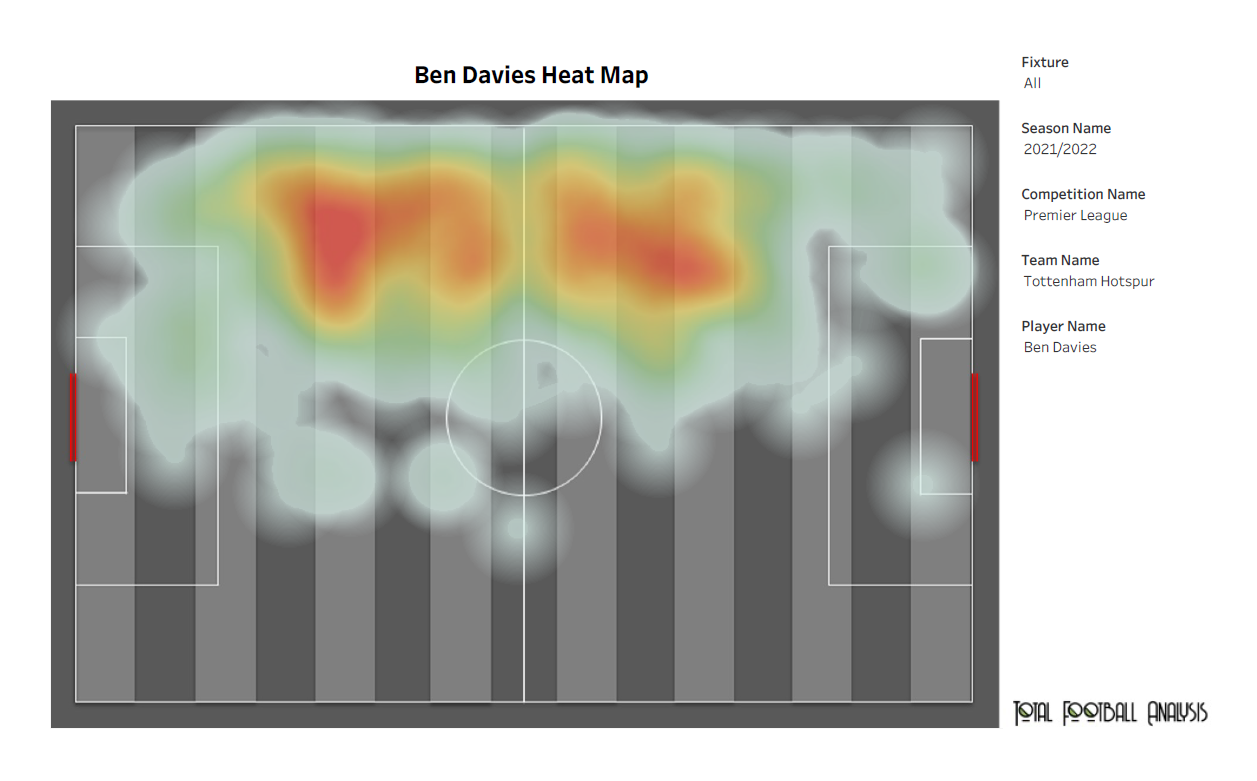 In the above viz., we can see Davies’ work rate and the areas of the pitch where he is most engaged. Davies has been impressive with his defensive positions and is comfortable in dealing with the opponents’ attack. In addition to his defensive responsibilities, Davies has been seen making underlapping runs into the box. When the opponent defenders are busy dealing with Spurs wide players, Davies exploits the half-spaces that open up for him and makes his underlapping runs, providing another outlet to his side’s attack.

Davies’ adjustment to the role of left-centre-back in Conte’s back-three system has been brilliant. The Welshman has quickly become one of Conte’s most trusted players in the back-line and is an influential cog for his side.