One of the objectives that Spurs fans wanted Antonio Conte to fulfill was getting Harry Kane back to his best form. Although it has taken a few months, the England captain has shown signs of resurgence in the past few weeks. A run of four goals in his last seven Premier League games has given the fans hope that Kane is close to his best.

Last season, Kane demonstrated a new dimension to his game. In addition to his goal-scoring output, the 28-year-old displayed his impressive link-up play and creativity, laying 14 assists in the league, a feat that placed him at the top of the Premier League’s assists chart. However, Kane was unable to replicate his impressive individual form from last season at the start of the current campaign. In his 13 appearances in the league, the England captain was able to score on just one occasion, indicating a rare decline in his form.

However, since then, Kane has shown an impressive desire on the pitch. The 28-year-old has scored seven goals in his 12 matches across all competitions. Conte stated after the recent FA Cup win against Brighton that they are trying to improve Kane physically, and it has been evident in the striker’s performances in the recent games. While there are still ways for him to go if he is to mirror his goal-scoring exploits from the past seasons, Kane’s all-round performances in the recent matches have given the fans hope that the England captain is close to his best form.

Let’s take a look at his stats to gauge the resurgence of Harry Kane under Antonio Conte. 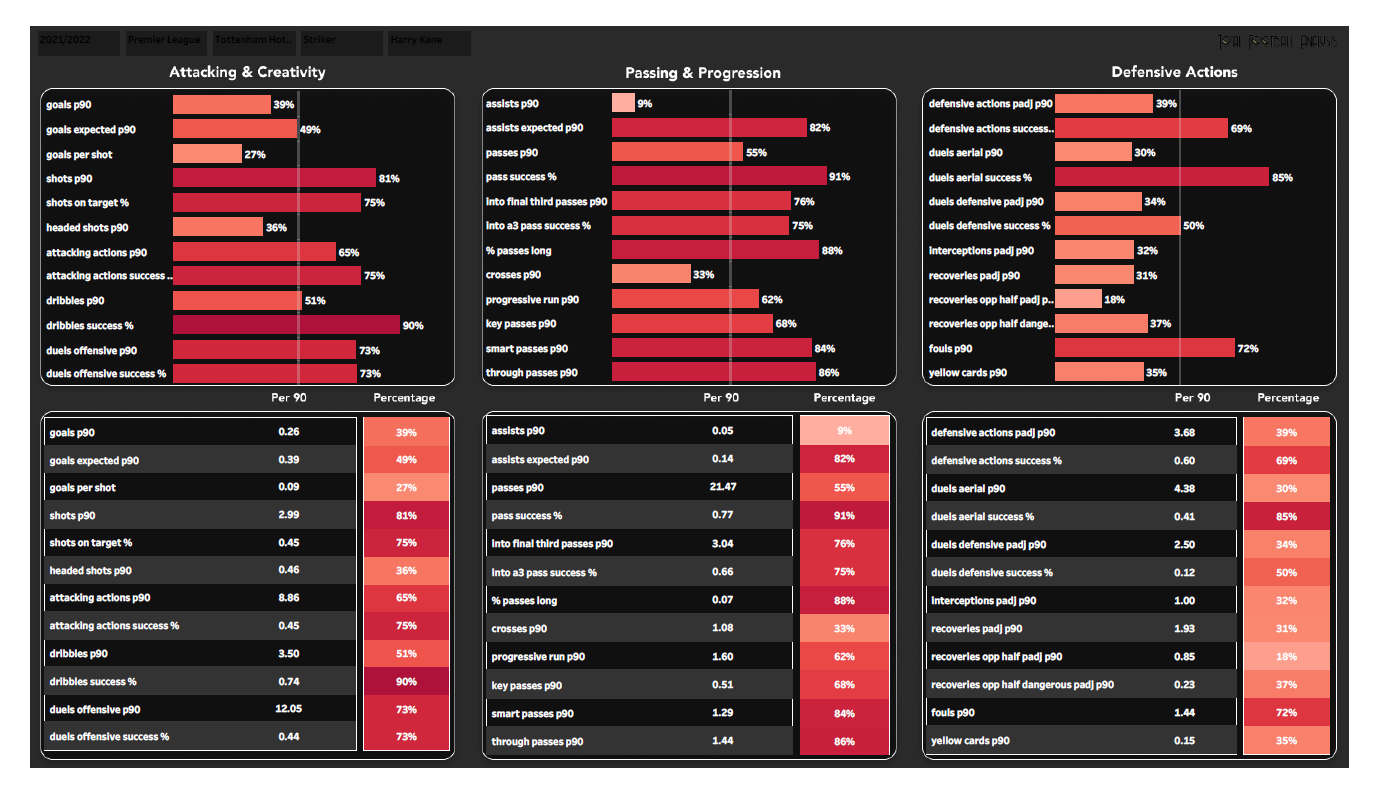 In the above viz., we can see Kane’s attacking & creativity, passing & progression, and defensive stats. The majority of his passing & progression stats surpass the league median, and he ranks highly in many of those metrics. His most notable passing & progression stats are expected assists per 90, smart passes per 90, and through passes per 90, indicating his high creative output. Kane’s passing success rate stands at an impressive 91%. In addition, he has created eight big chances this season. The 28-year-old’s attacking & creativity stats have also improved since Conte’s arrival. We can see that he ranks highly in terms of shots per 90 and successful dribbles. 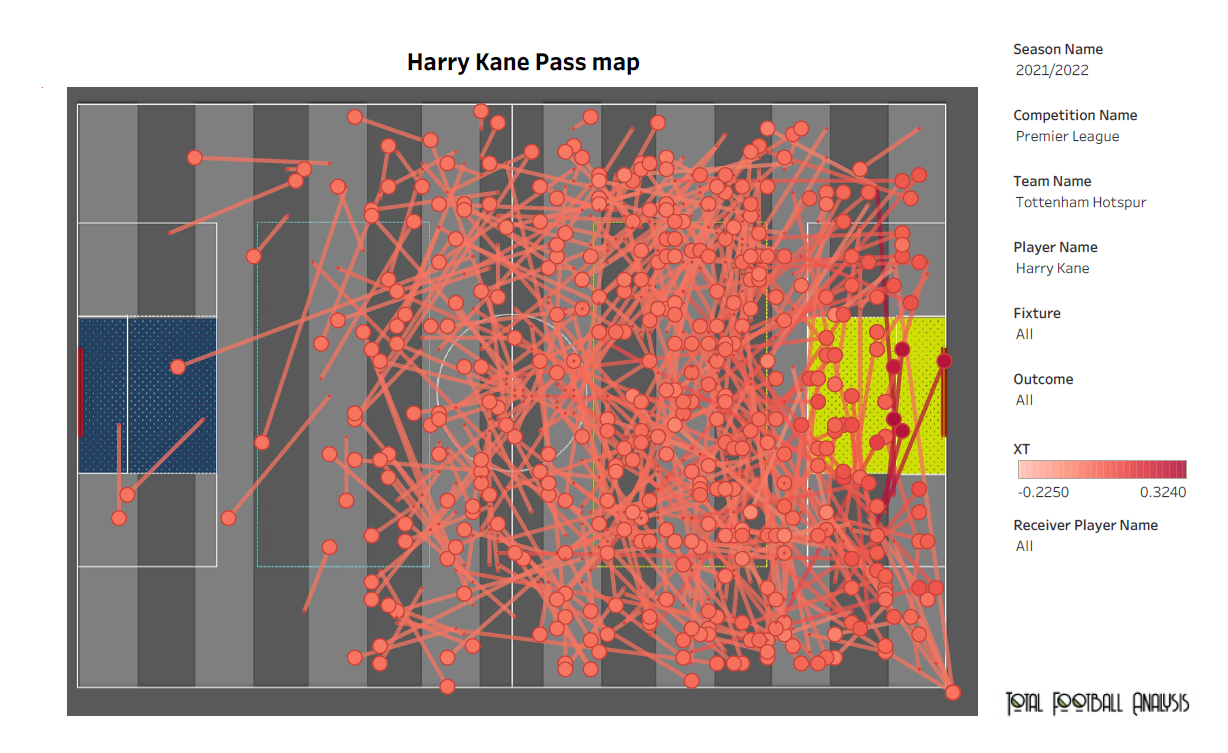 The above pass map highlights the locations of the pitch where Kane has delivered his wide array of passes this season. We can see that he has delivered multiple threatening passes into the opposition box. Conte’s arrival has been followed by a massive improvement in the link-up play of Tottenham’s attacking trio of Kane, Son, and Moura. Often this season, Kane has been the goal creator for his attacking partners. 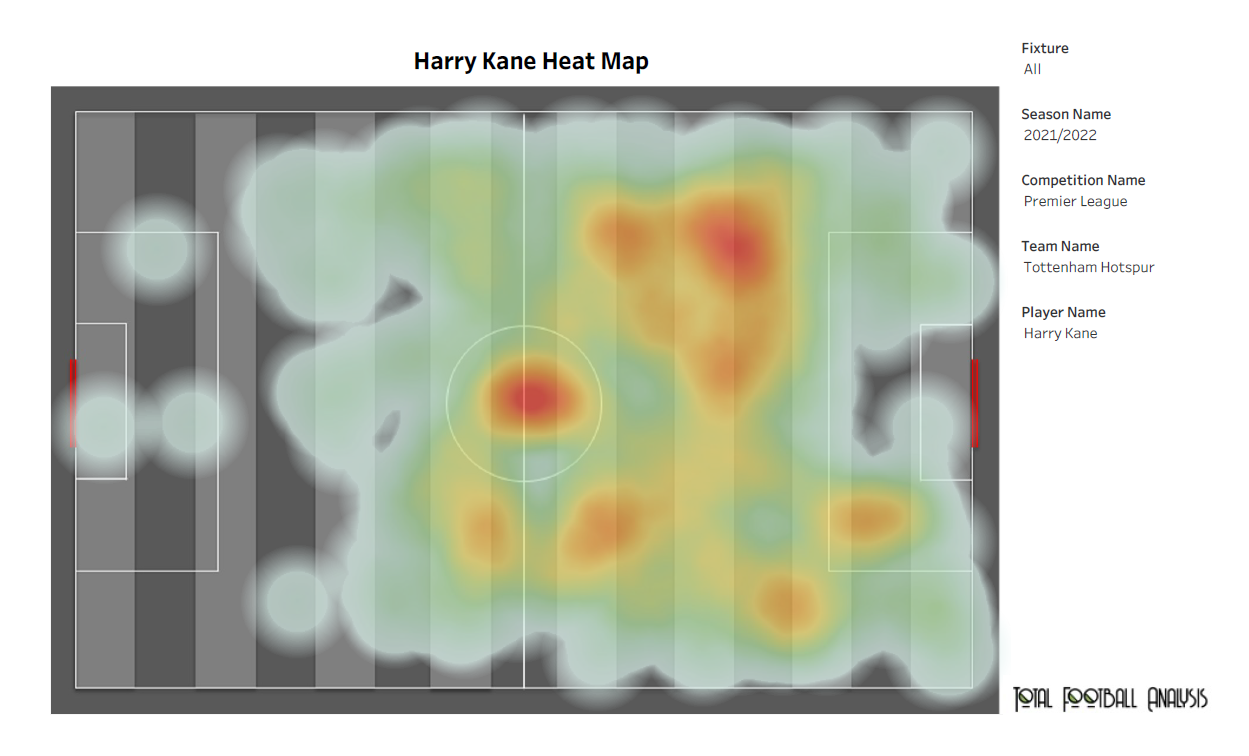 In the above viz., we can see Kane’s extensive work rate and movement on the pitch. During the start of the season, Kane tended to drift in the wide areas where his impact and threat were reduced. However, under Conte, the England captain has been getting on the end of the moves while also contributing with his link-up play and creativity. We can see in the above viz. that Kane has dropped in his half as well. 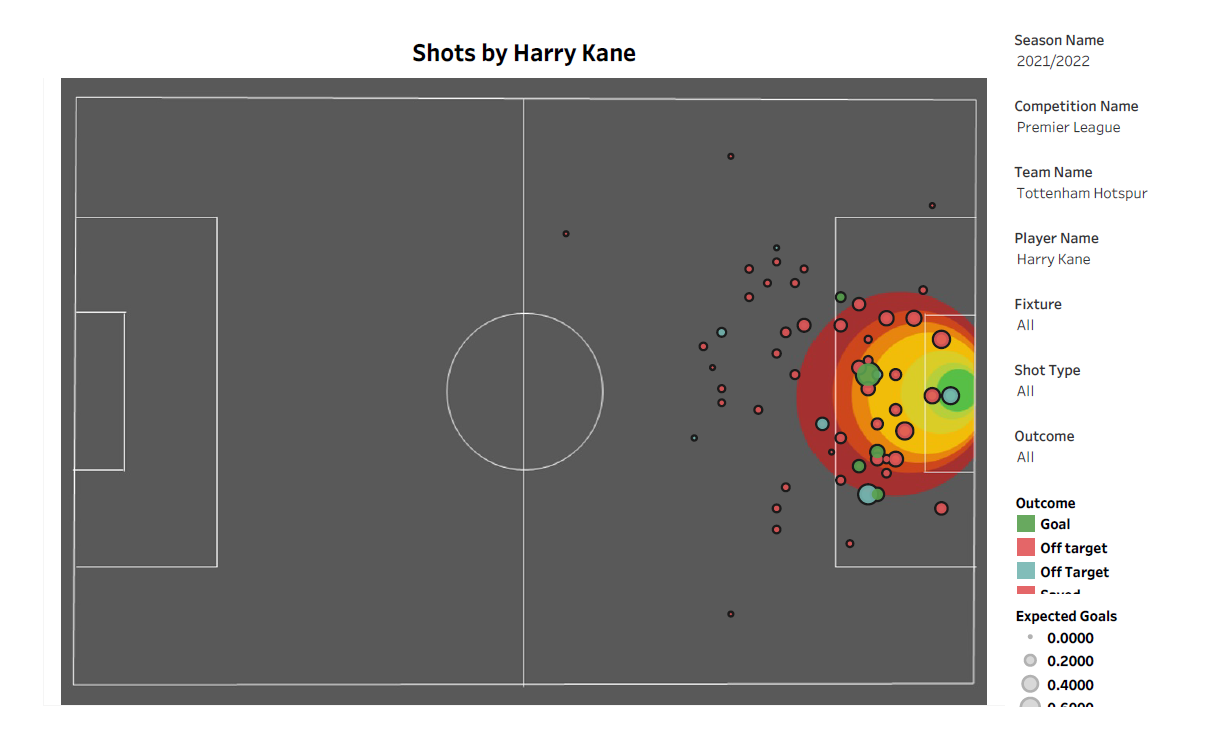 In the above shot map, we can see the locations on the pitch from where Kane has taken his shots. There was a marginal decline in the number of shots that he had taken, and his success rate in converting those shots had taken a hit as well. However, there have been signs in his recent appearances that he might be able to improve upon that success rate. So far, Kane has scored five goals in 20 appearances in the league. All of his goals have been scored from inside the opposition box.

It is a matter of utmost importance for Tottenham to have Kane back to his goal-scoring best if they are to mount a strong challenge for the top-four. Kane’s stats and form in the recent matches indicate that the striker could get back to his best in the second half of the season.