Tottenham have reportedly shown their interest in signing Juan Cuadrado from Juventus. The 33-year-old, whose contract expires at the end of the season, is yet to reach an agreement for a new deal, and Spurs are closely monitoring the situation. While the Columbian is keen to extend his stay at Turin, he could leave on a free transfer if an agreement cannot be reached.

Cuadrado is a versatile winger who is comfortable playing in multiple positions on the right wing. Throughout his time with Juve, the 33-year-old has featured as a winger, a right-back, and a wing-back. Tottenham manager, Antonio Conte, has stated on multiple occasions that Spurs lack the quality to compete at the highest level. While Tottenham have reinforced their midfield and wing area by bringing in Rodrigo Bentancur and Dejan Kulusevski in January, it is understood that Conte wants to supplement the wing-back area as well. Spurs were heavily linked with a move for former Wolves winger Adama Traore in January, however, the Spaniard ended up making a return to his former club Barcelona.

At the age of 33, Cuadrado is still one of the most creative and consistent players in the Juventus squad. Despite multiple managerial changes, the Columbian has regularly found his place in the starting lineup. Amidst the inconsistencies this season, Tottenham have slowly planted their feet back in the Premier League, and they remain in strong contention for a top-four finish. Adding Cuadrado to the squad could definitely supplement Spurs’ creative issues concerning the wing-backs.

Let’s take a look at some stats to gauge whether Cuadrado would be a suitable addition to Conte’s squad. 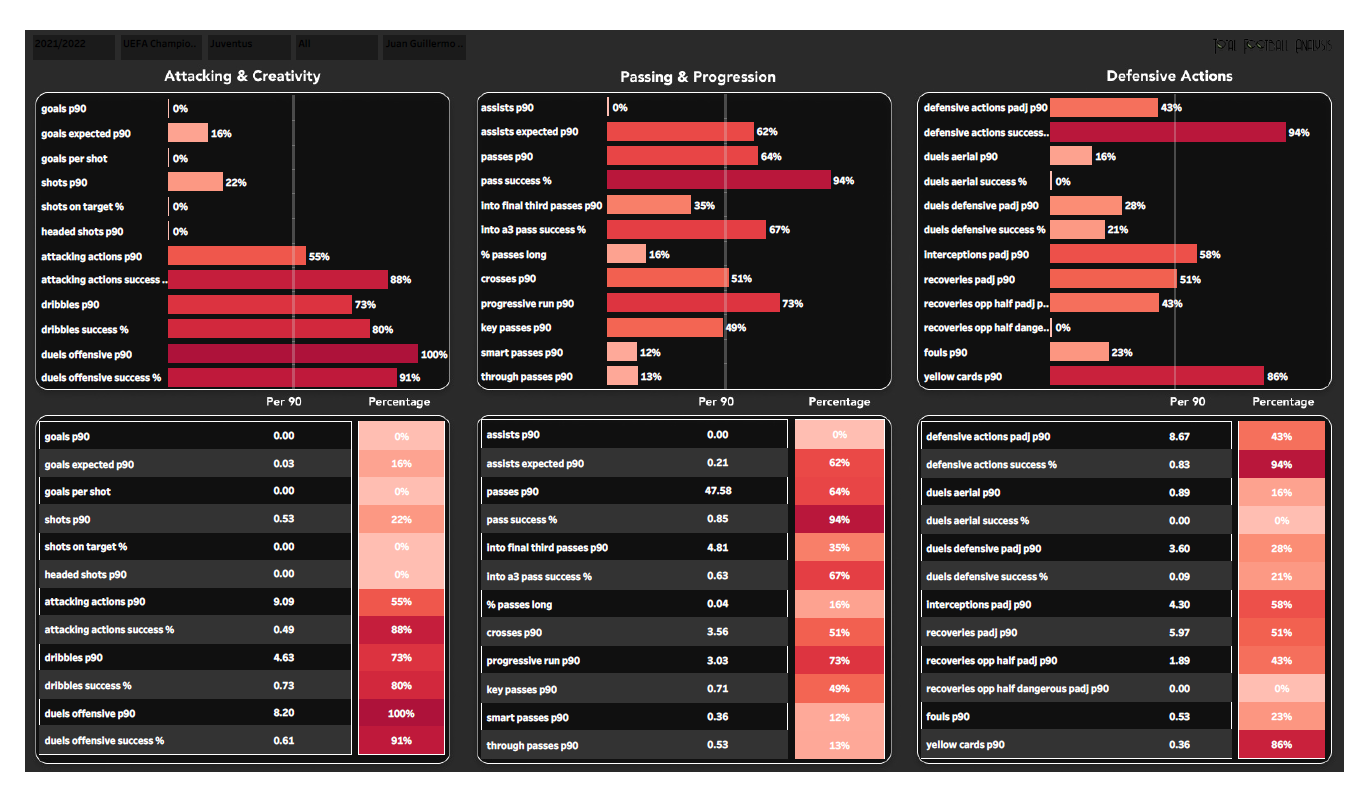 In the above viz, we can see Cuadrado’s overall stats in the Champions League. In terms of attacking & creativity, the Columbian has excelled in attacking actions success rate, dribbles success rate, offensive duels per 90, and offensive duels success rate. Cuadrado ranks in the 94th percentile in terms of passing success rate. The 33-year-old has also fared above the league median in terms of the attacking third pass success rate per 90 and progressive runs per 90. He is known for his strong dribbling ability, and his intelligent off-the-ball movement is impressive as well. Due to his ability on the ball, Cuadrado is strong when progressing the ball into threatening areas near the opponent’s half. 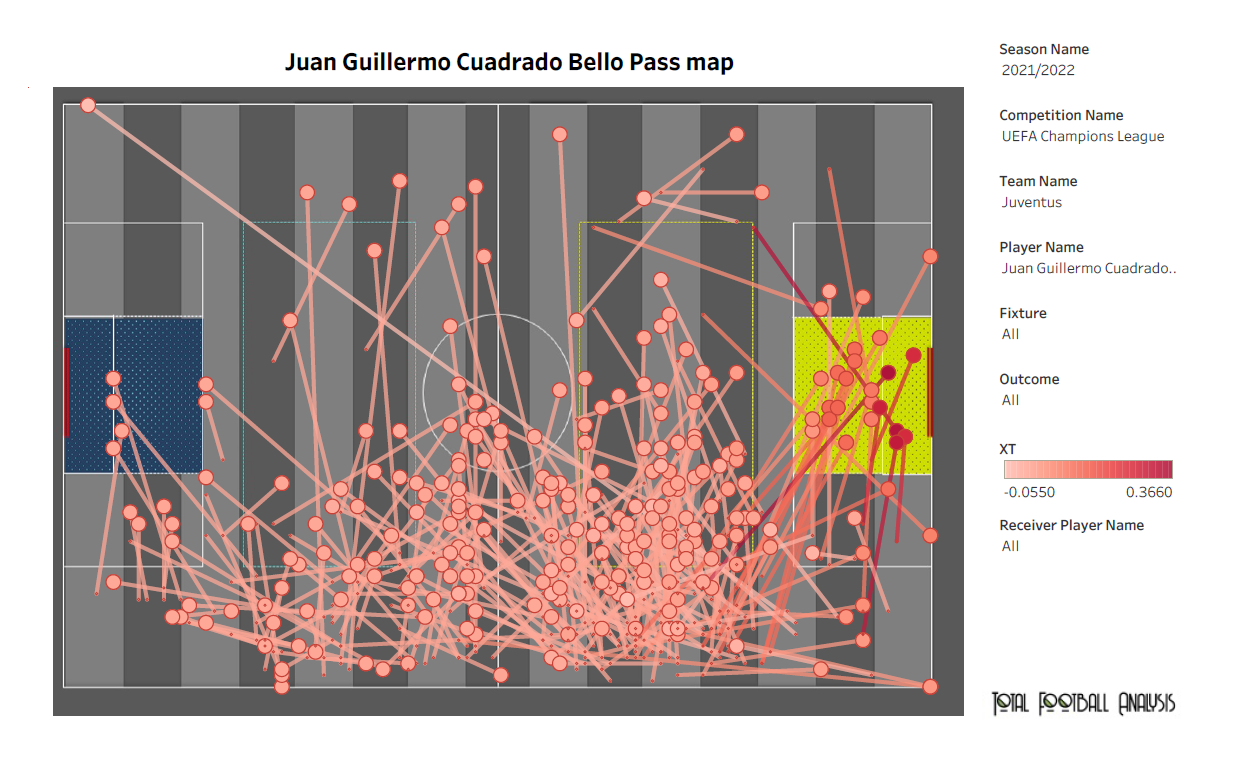 The above viz displays the wide array of passes that the winger has delivered. We can see that most of his passes into the opponent’s box are delivered from the wide areas and half-spaces on the right wing. Cuadrado utilizes his dribbling ability to stretch the opposition defense and create space for his attackers. A lot of his passes near the penalty area carry a high expected threat. The Columbian often acts as an important link-up between the attack and the defense, aiding his side massively during the build-up phases. 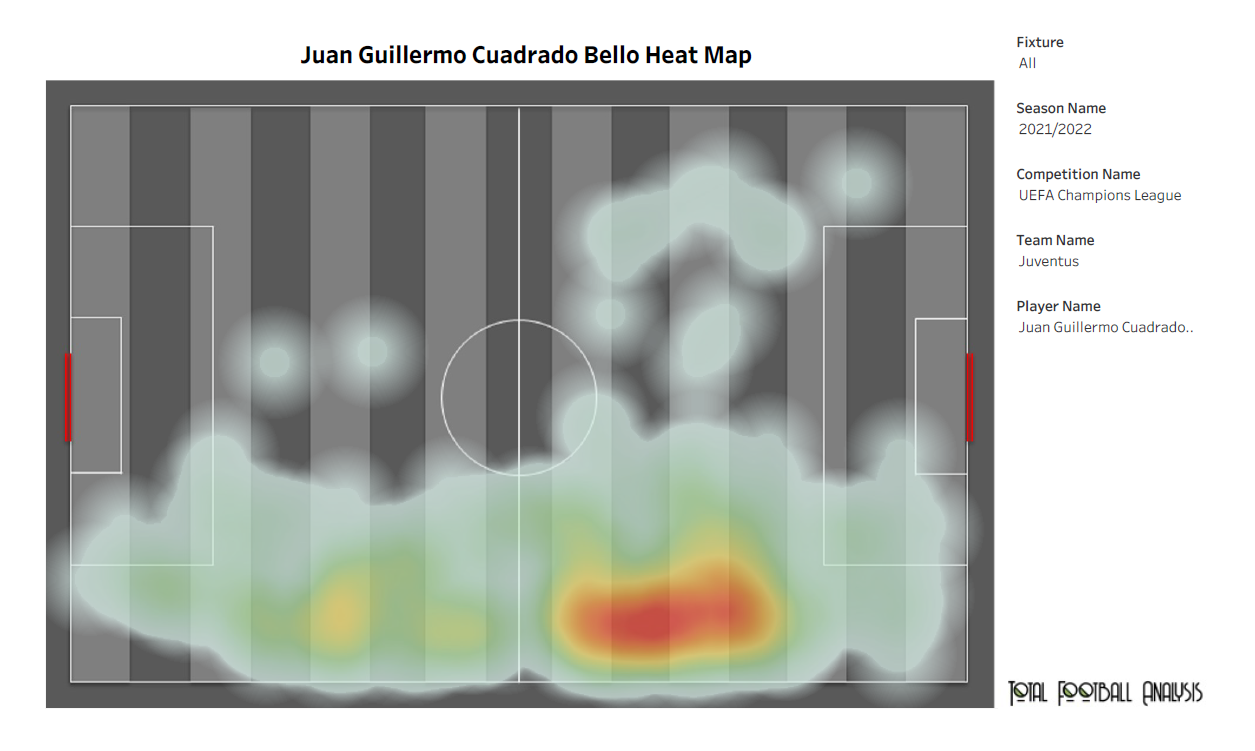 Cuadrado regularly tracks up and down the right flank, sometimes drifting in-field to create overloads in the midfield. This season, the Columbian has been deployed as a right-back, wing-back and as a right midfielder. Cuadrado is quick off the blocks and is capable of attacking the wings in the opposition’s half. He has experience playing in a back-three and a back-five setup, and he could provide dynamism to Tottenham’s wing area.

With Tottenham in the market for a wing-back, a deal for the Columbian on a free transfer could benefit Tottenham. While he might not be a long-term solution, the 33-year-old’s experience could be vital for Tottenham next season if a deal does go through.