Amidst the inconsistency displayed by Antonio Conte’s men this season, two crucial wins on the bounce have put Tottenham back in strong contention for a top-four finish. Spurs bounced back impressively after their disappointing loss against Manchester United, taking a 2-0 win away at Brighton, followed by another excellent 3-1 win at home against West Ham. As a result of their two successive wins, Spurs have moved to the fifth spot in the Premier League, making a huge stride in the race for the fourth spot. Currently three points behind their North London rivals, Arsenal, Spurs could put the Gunners under huge pressure provided they carry their form in the upcoming matches.

Something that the Lilywhites have been missing since the turn of the year is an unbeaten run. In the 15 games across all competitions since that New Year’s Day win, Tottenham have tasted defeat in eight and took victory in seven, failing to take two wins on the bounce even once. Although the January signings have been crucial for Spurs, they have missed a few important players, a situation that has played a hand in the team’s inconsistent performances.

Oliver Skipp is one of those players whose impact on the team cannot be understated. The 21-year-old was a mainstay for Tottenham this season before his injury, with Conte highlighting his importance on multiple occasions. Now with his return on the horizon after the international break, Tottenham could put forth a strong display to finish their season of inconsistency on a high. The lineup that Antonio Conte picks could prove to be crucial if Spurs are to lay a claim over the spot currently occupied by their North London rivals.

Let’s take a look at some stats to gauge line-up that could propel Antonio Conte’s men to a top-four finish. 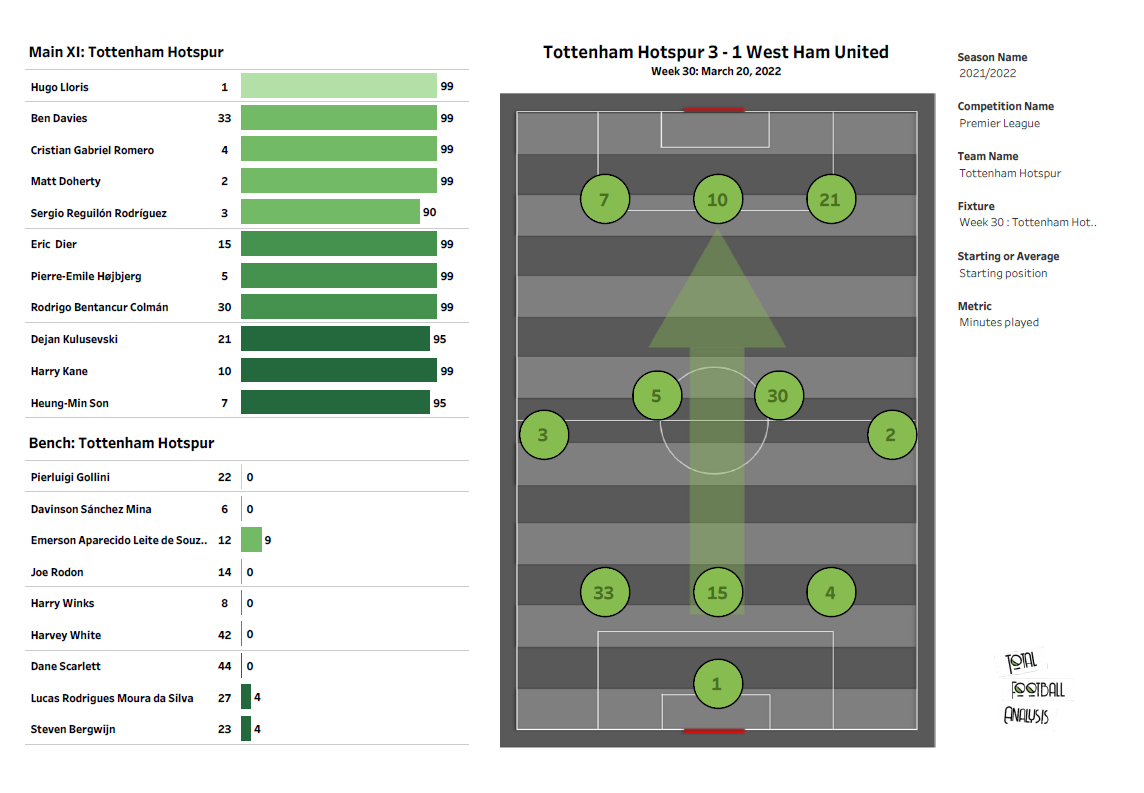 In the above viz, we can see Tottenham’s lineup in their 3-1 win over West Ham. For the past month, Conte has kept the formation and the lineup similar, a scenario that suggests that he has mostly been settled in his starting XI – Hugo Lloris between the sticks with Eric Dier, Ben Davies, and Cristian Romero as the three centre-backs. Sergio Reguilon and Matt Doherty have been deployed in the role of wing-backs, while the two-man midfield pivot consists of Pierre-Emile Hojbjerg and Rodrigo Bentancur. The attacking lineup has included Harry Kane along with Son Heung-min and Dejan Kulusevski on either flank. Ryan Sessegnon has also featured in the wing-back role. 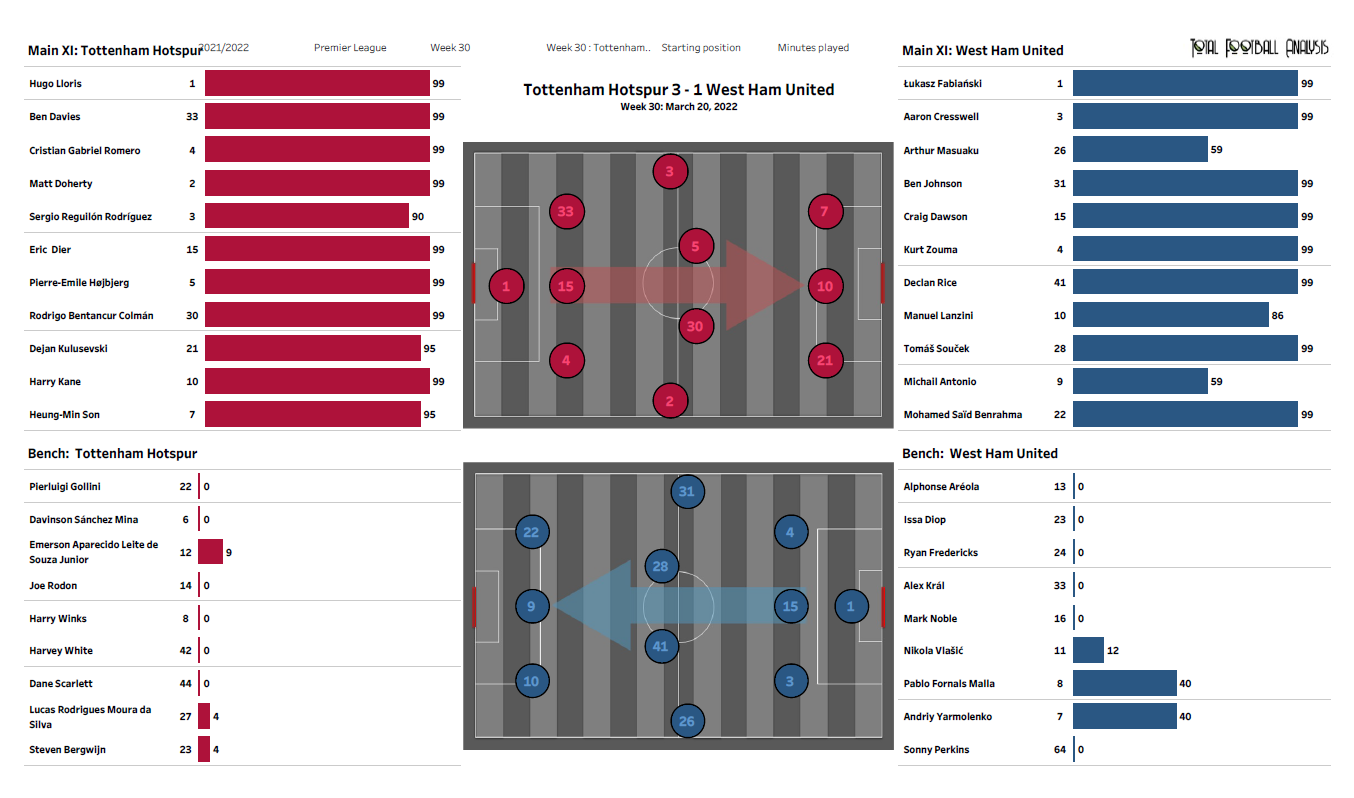 The above viz displays a comparison of lineups between the two teams. In the win against West Ham, Tottenham put up a strong performance in the first half, and they were lethal in their counter-attacks. Tottenham’s front-three are increasingly looking in sync as they continue to play more matches together. Since his move in January, Dejan Kulusevski has added another dimension to Spurs’ attack. Despite not scoring or assisting in the win against West Ham, Kulusevski was a consistent threat in possession, and his runs up the right flank provided Spurs with an outlet. Kane was involved in all three of Tottenham’s goals despite not scoring, while Son was back to his former self after a few dull performances in recent matches, scoring two goals. 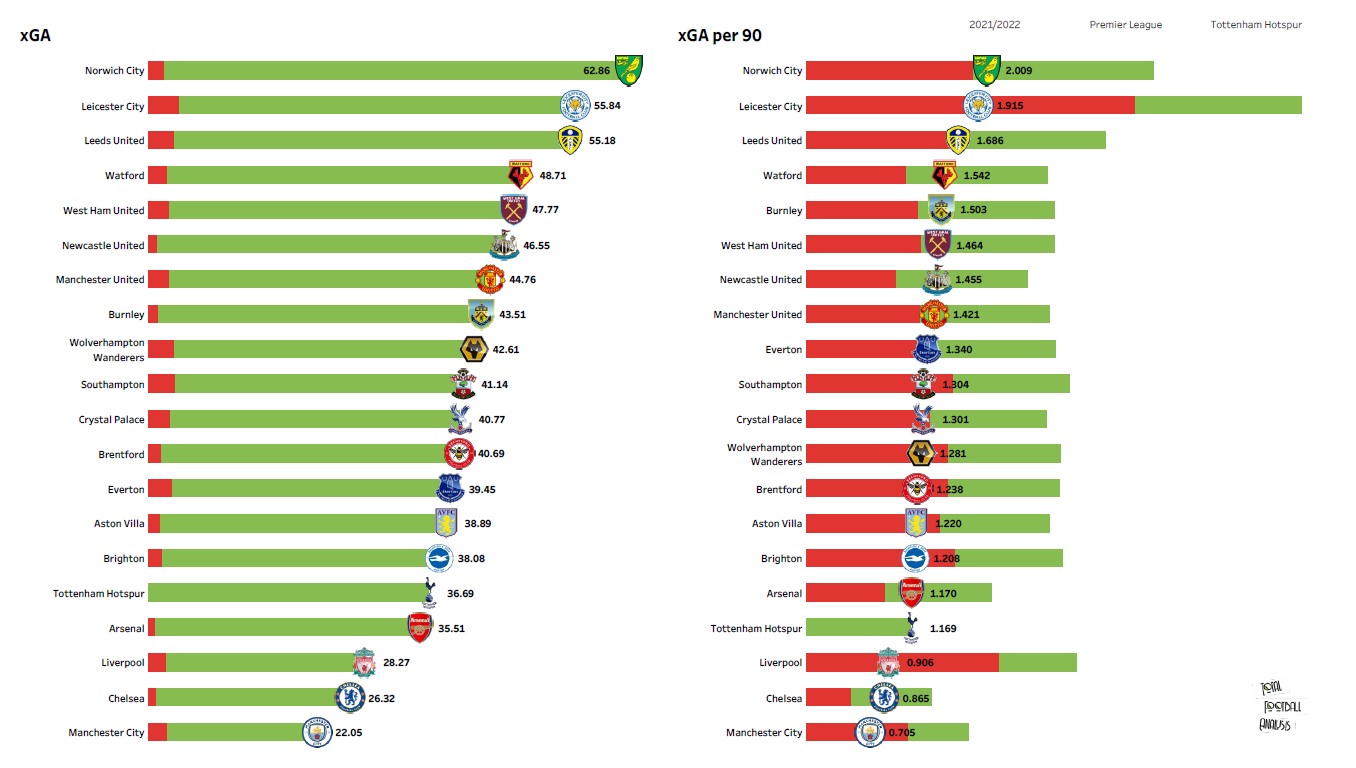 In the above viz, we can see that Tottenham have the fifth-lowest xGA in the league, indicating that they have been conceding fewer quality chances. Defensively, Tottenham have looked sharp in recent matches barring the defeat against United. The trio of Dier, Davies, and Romero seemed to have clicked in the past month. Dier has marshaled the backline with support from a relentless Romero and a dynamic Davies. Matt Doherty has improved a lot in his performances at the right-wing back, while Reguilon, despite a few inconsistent performances, has contributed in the attack as well as in the defense. Bentancur is another January signing who has been impactful for Tottenham, more so in the recent matches. Hojbjerg has maintained his strong presence in the midfield as well.

Tottenham would need to pick up wins in their upcoming matches if they are to make a serious claim for the fourth spot in the Premier League. The lineup against West Ham was a quintessential lineup for Tottenham in their upcoming matches, barring one change that could even further strengthen Conte’s midfield. The return of Oliver Skipp could provide more dynamism to Tottenham’s midfield, however, it would be interesting to see who Skipp replaces in the midfield.