Tottenham’s inconsistent form this season does not seem to end. An emphatic win against Manchester City was followed by a loss against Burnley, and then another impressive win against Leeds was overshadowed by a defeat at Middlesbrough. Lack of consistency to grab a decent string of results has plagued Spurs all season. The 0-1 loss against Middlesbrough has effectively ended Tottenham’s hopes for any silverware this season. On a disappointing night for the Lilywhites, a large majority of players struggled to perform. Tottenham especially struggled to dominate the match in the midfield.

Since taking charge of Tottenham, Conte has mostly deployed a double-pivot in the midfield with a 3-4-3/3-4-2-1 formation. Among all of Spurs’ midfielders, Hojbjerg has featured the most in Conte’s midfield pivot, with the remaining slot filled by either Oliver Skipp or Harry Winks. The Danish midfielder’s place in Conte’s midfield is unlikely to change despite a minor decline in his form in a few of the recent games. This situation leaves one slot available in the midfield for which Winks, Skipp, and new signing Rodrigo Bentancur could compete.

Under Nuno Espirito Santo, Winks struggled to feature in the midfield. However, since Conte’s arrival, Winks has shown his desire and work rate in the midfield and has been able to get consistent game time, more so since Skipp suffered an injury back in January. Although he has suffered a few setbacks, Skipp’s return is on the horizon. With Bentancur now also competing for a spot, it will be interesting to see who can lay claim for a spot in Conte’s midfield.

Let’s take a look at some stats to gauge which player can be an ideal partner for Hojbjerg in the midfield. 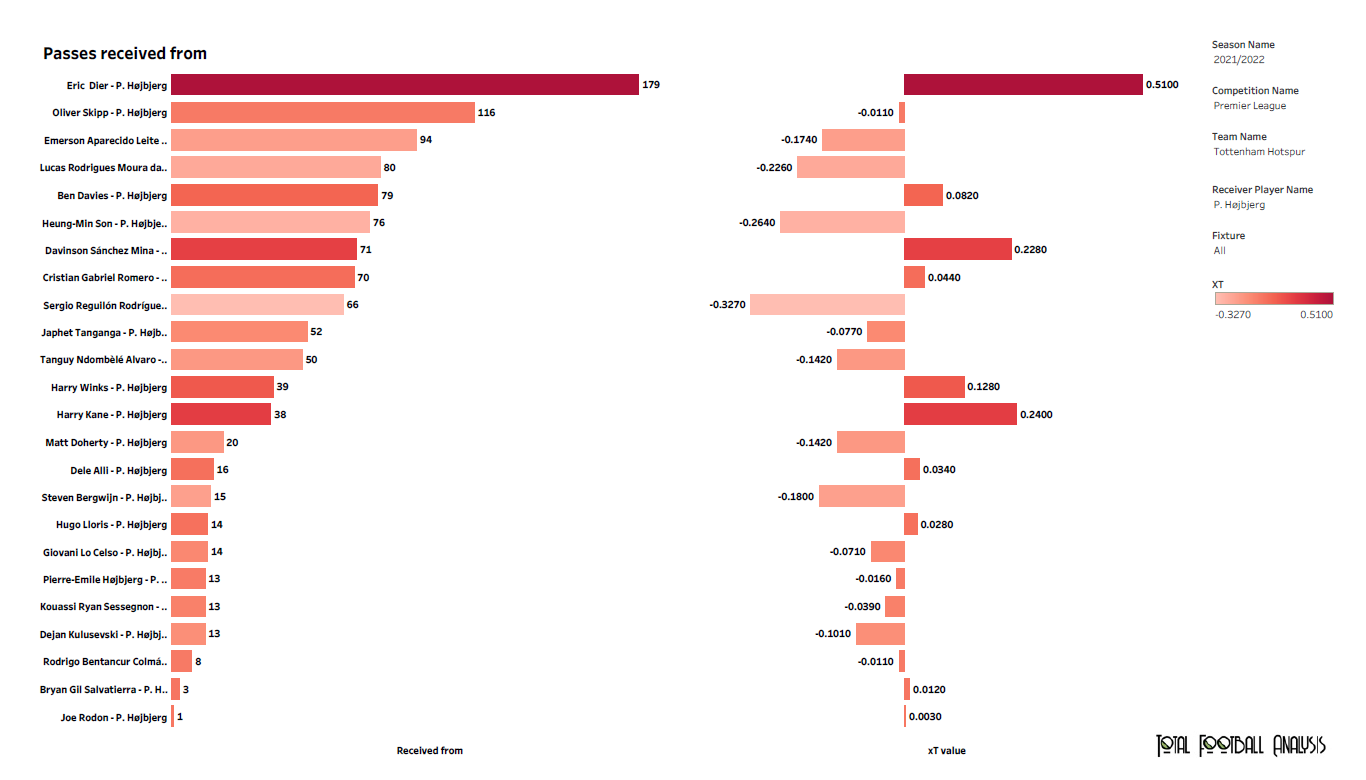 Hojbjerg has become more active and forward-thinking under Conte. In the recent loss against Middlesbrough, the 26-year-old made an impressive run and delivered a cross which almost led to a goal. Despite his positive contribution, Hojbjerg was unable to dominate the midfield due to a lack of support. In the above viz., we can see passes received by Hojbjerg from various Tottenham players. 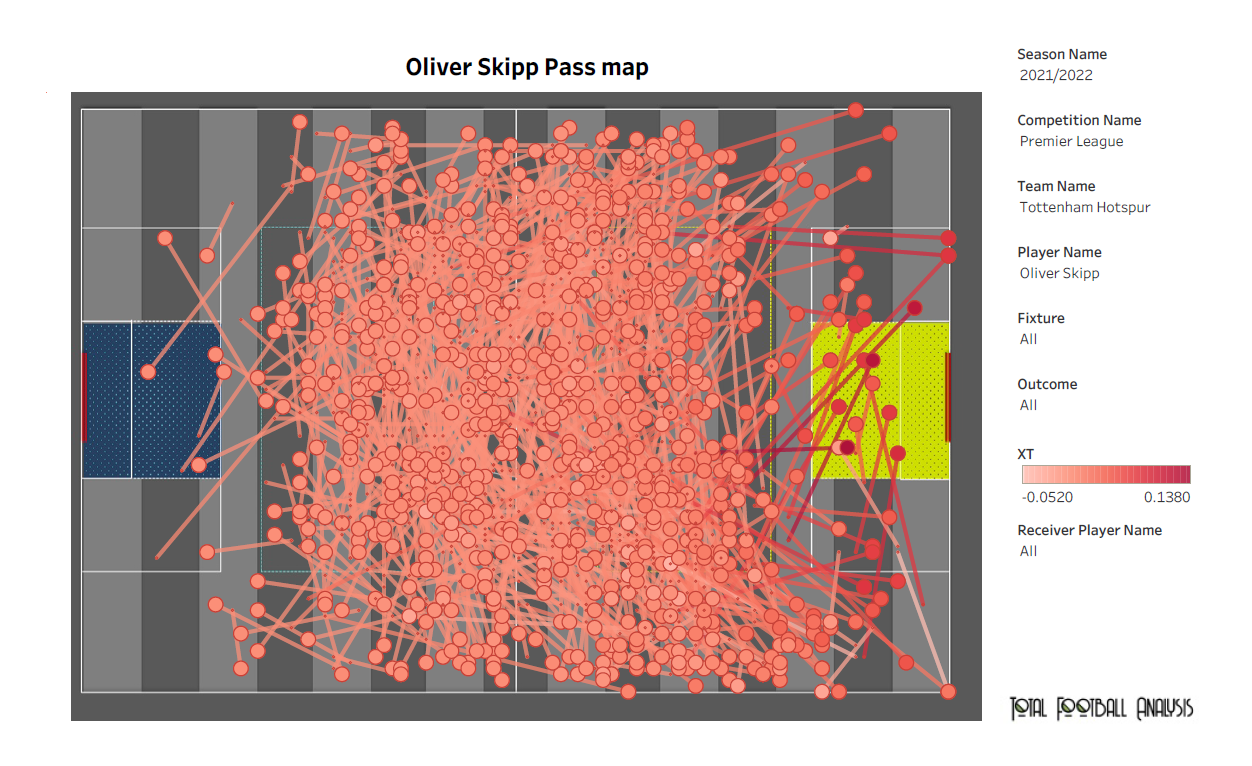 Skipp has been one of Tottenham’s most consistent players this season. He was a regular feature under Nuno and has maintained his place under Conte as well. Conte has claimed that Skipp has improved a lot under him and also outlined his importance for Tottenham. In the above viz., we can see Skipp’s pass map. Skipp displays impressive vision and the ability to control the game in the midfield. As highlighted in the above viz., he has attempted passes all over the field. His energy and drive to regain possession in the midfield make him an excellent partner for Hojberg in the midfield. 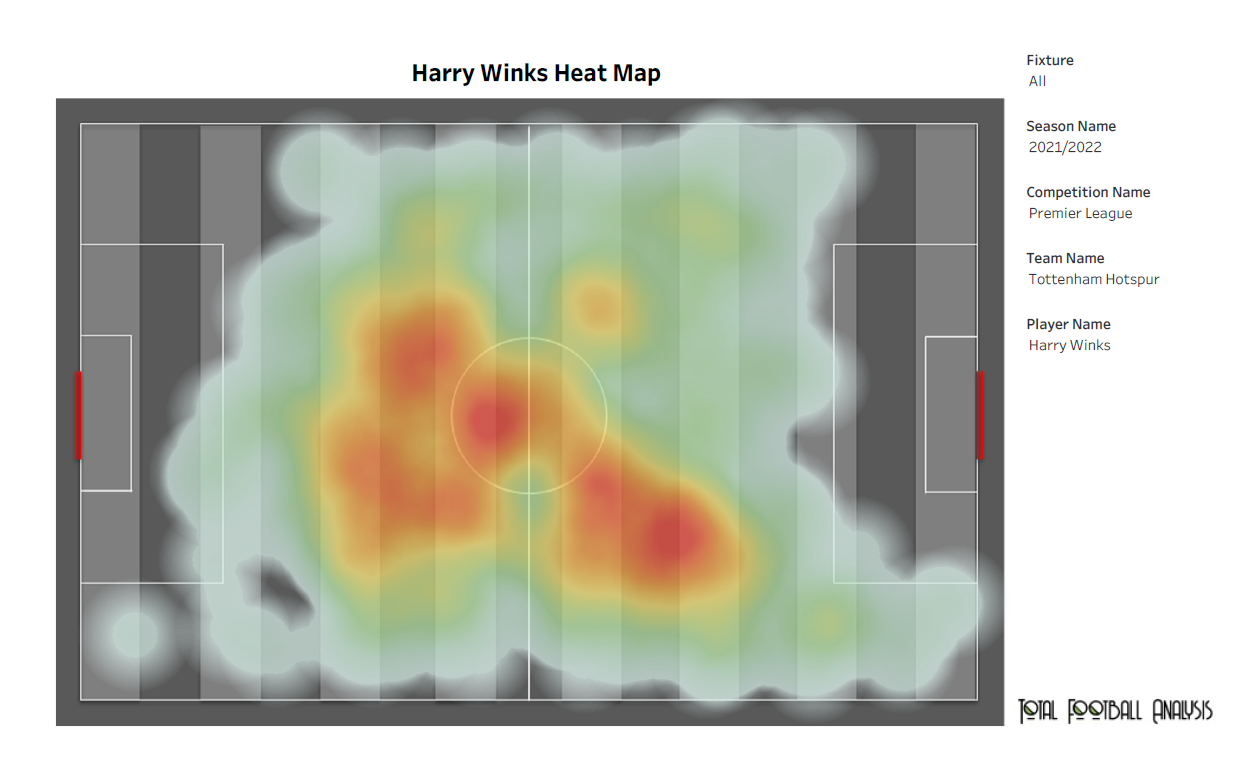 Since Skipp’s injury, Winks has featured regularly in Tottenham’s midfield. The midfielder has impressed a lot with his work ethic, contributing at both ends of the pitch. He has shown some impressive performances, adding an attacking edge to his game in recent matches. However, he has also gone missing in the centre, case in point, the recent defeat against Middlesbrough. The above viz. highlights his impressive work rate. We can see that he has been active in the forward areas as well. 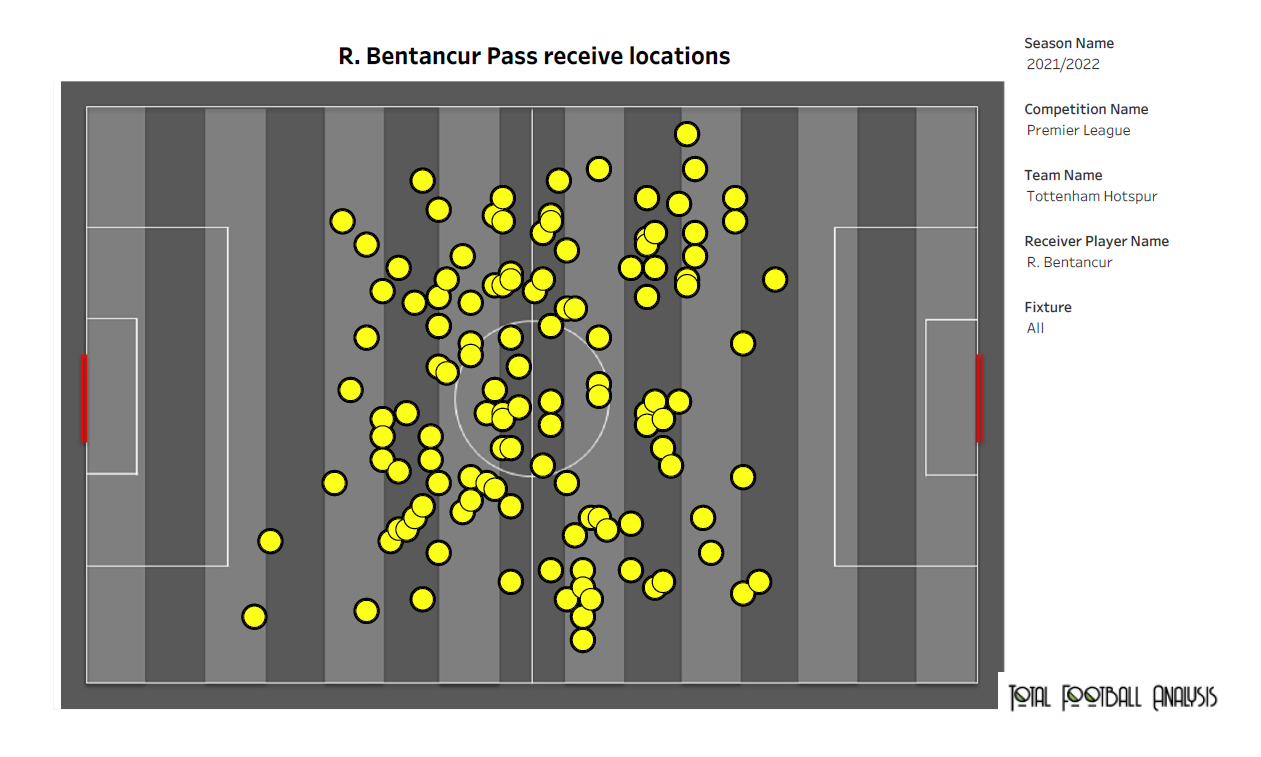 Spurs’ new signing, Rodrigo Bentancur, is another option for a place in Conte’s midfield-pivot alongside Hojbjerg. While the Uruguayan is still getting used to the pace and speed of the Premier League, he has shown his combative side and utilized the ball well. With more appearances under his belt, Bentancur could demonstrate his excellent passing range and defensive contribution. The above viz. highlights the locations of the pitch where the Uruguayan has received his passes.

With a busy fixture schedule, Conte could rotate his midfield lineup, which means plenty of game time for Winks, Skipp, and Bentancur. However, it is looking likely that Oliver Skipp might be ahead of the other two midfielders once he returns to full fitness.