After three defeats on the bounce, Tottenham produced one of their best performances of the season. A brilliant display of counter-attacking football blew the Premier League title race wide open as Spurs overcame the league leaders, Manchester City, at the Etihad Stadium. A match that showcased one of the best all-round performances from England captain Harry Kane this season also featured a less-talked-about display from Tottenham’s recent recruit Dejan Kulusevski.

Conte deployed his usual back-three formation against the Cityzens, but with a slight tweak. The front three consisted of Kane, Son, and Kulusevski. In recent weeks, Spurs had not only struggled defensively but also lacked threat in the final third. Lucas Moura, who has featured regularly in Conte’s attacking line-up since the Italian manager’s arrival, has suffered a slight drop in form in the recent matches. Although he is one of the most creative players in the Spurs’ squad, Moura has failed to show numbers this season. In 22 appearances in the Premier League, the Brazilian winger has scored two goals and registered four assists. His slight decline in form combined with the recent performances of Kulusevksi could give Conte a selection dilemma to find the last piece for his dream front-three.

Since making his debut for the Lilywhites in the 3-1 win against Brighton in the FA Cup, Kulusevski has impressed with his performances. In his first full 90 minutes in the Premier League in the remarkable win against Manchester City, not only did Kulusevski score the opening goal, but he also laid the assist for Harry Kane’s winner. In addition, he was a continuous creative spark, fitting into the front three with ease.

Let’s take a look at some stats to gauge who between Moura and Kulusevski is a better fit for Conte’s starting XI. 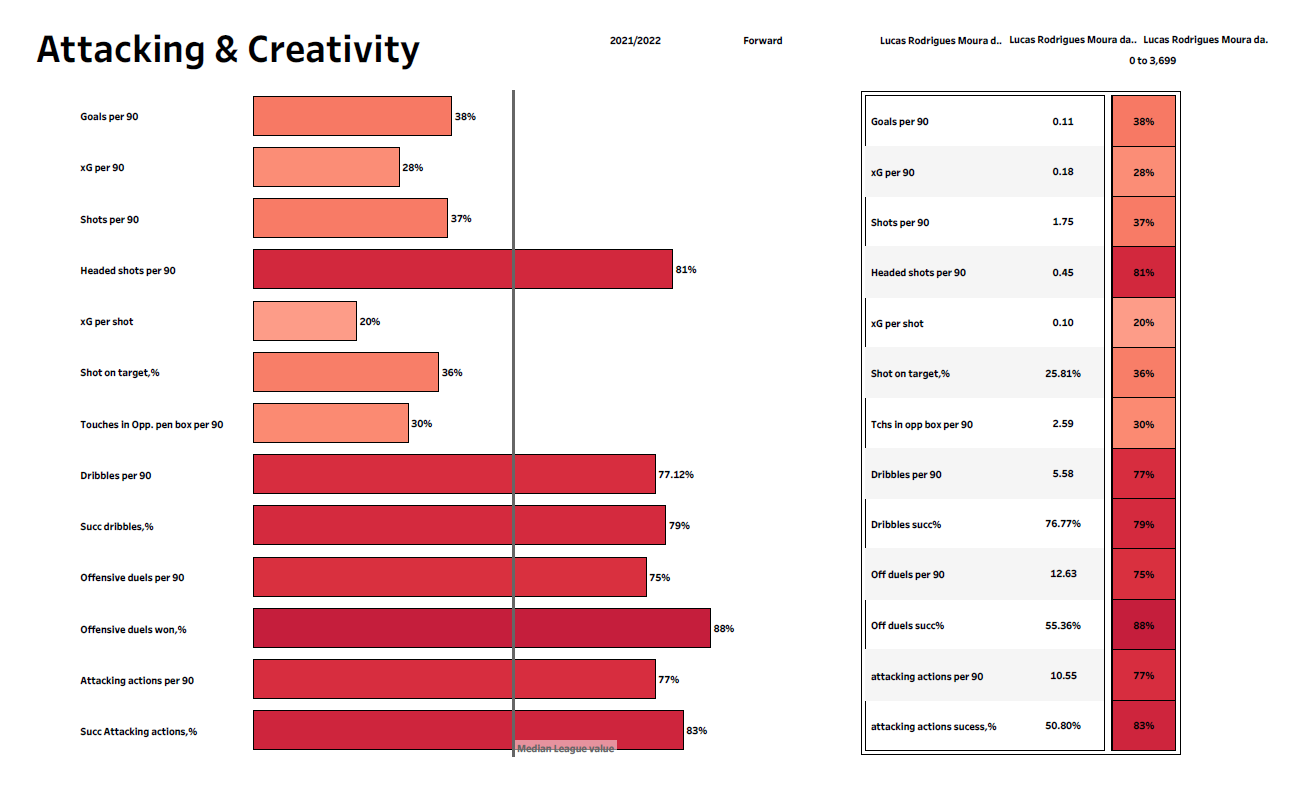 In the above viz., we can see Moura’s attacking & creativity stats this season. While he has fared above the league median in most of his attacking & creativity stats, Moura has been below average in some. His most notable stats are offensive duels won and successful attacking actions. He has an offensive duel success rate of 55.36% while also having an attacking action success rate of 50.80%. In terms of his creativity, Moura has done well, however, his goal contribution is still an area where Conte would be expecting more from the Brazilian. 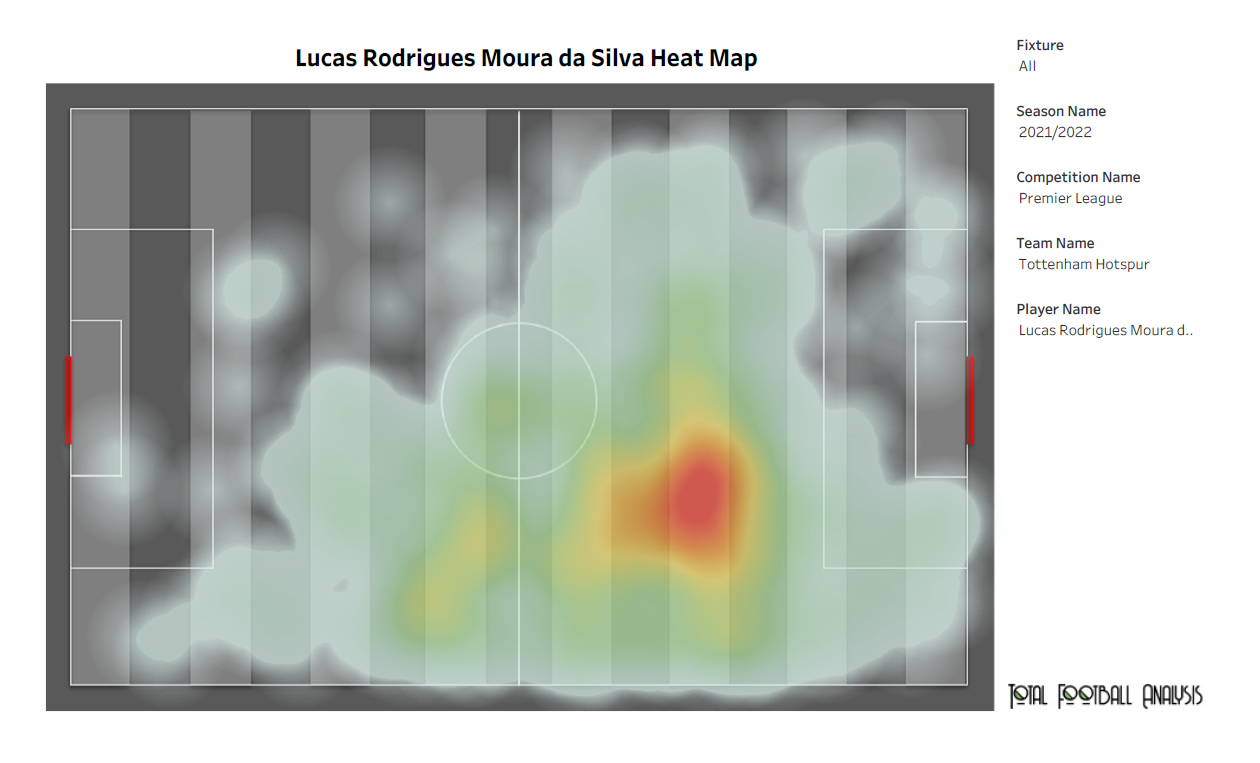 The above heat map highlights the location where Moura is most active. When Conte took charge of Spurs last year, many wondered if Moura would be transitioned into a right-wing back, however, Conte has so far deployed him as a right-winger or as an attacking midfielder. While he has shown glimpses of his creativity, dribbling ability, and acceleration, Moura has also been ineffective in many games, specifically against teams where attacking opportunities were limited, case in point, against Wolves. 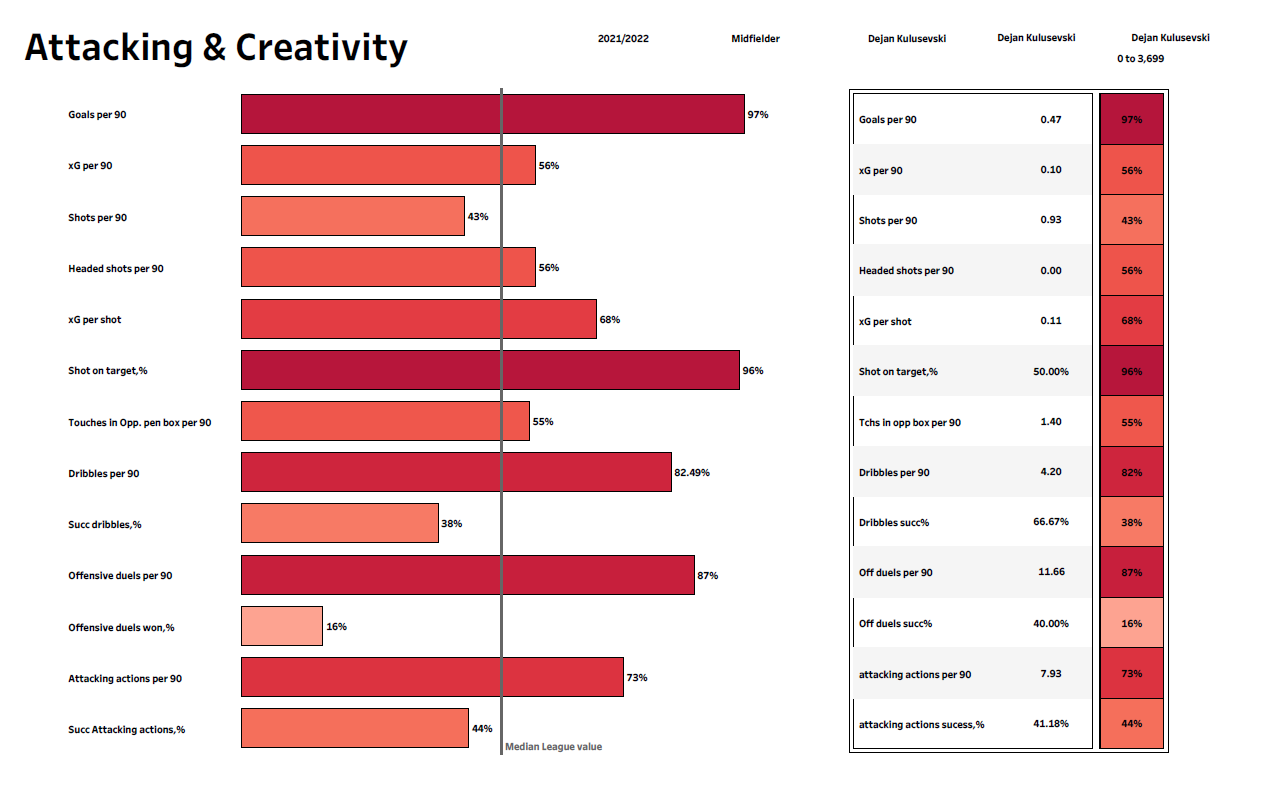 After impressing in his debut match, Kulusevksi has taken little time in adjusting to English football. He was one of the few bright sparks in Spurs’ defeat to Wolves and was one of the best performers in the win against Manchester City. In the above viz., we can see Kulusevski’s attacking & creativity stats. Although his fewer appearances could inflate some of his stats, his overall performances have been impressive. His most notable stats are shot accuracy, dribbles per 90, and offensive duels per 90. 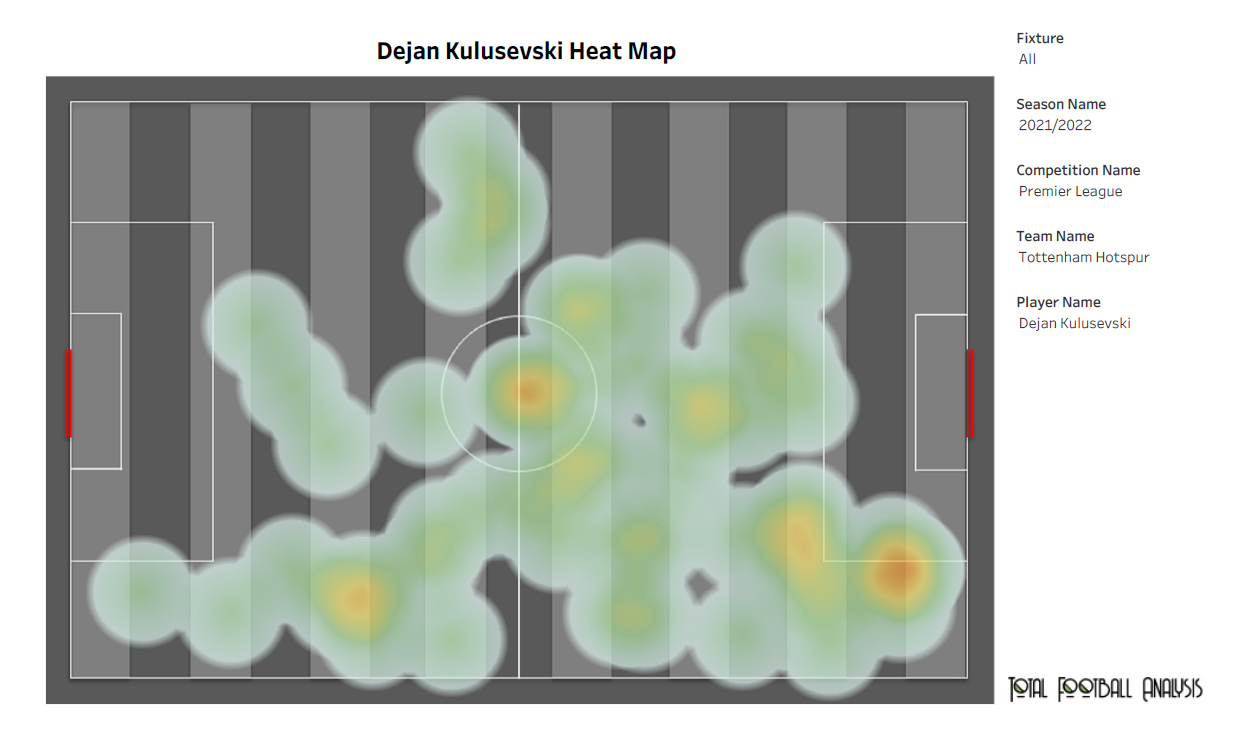 In the above viz., we can see the multiple areas of the pitch where Kulusevski has popped up. His coverage of the pitch has been impressive. One of the areas where Kulusevski excels is his positional versatility and awareness, an aspect which was in full display in the win against the Cityzens. The Swedish winger’s positional versatility should make Conte rethink the other variation of his back three, a 3-5-2 formation, as Kulusevski is capable of operating as a number ten or as a right-sided midfielder. In addition, Conte has also indicated that he could try Kulusevski as a right-wing back.

Kulusevski’s positional versatility and direct style of play could give him a slight edge over Moura, especially with the Brazilian’s slight drop in form. The upcoming games should give Kulusevski plenty of chances to prove himself as a more regular option for Conte’s front three. If the Swedish winger continues to perform the way he did against Manchester City, Conte would perhaps be able to find the finishing piece to his dream front-three.