Since his arrival at Tottenham, Antonio Conte did not waste time in implementing his trademark back-three formation. During his title-winning season with Inter Milan, Conte utilized a 3-5-2 formation that provided the foundation for Nerazzurri’s first Serie A title in a decade. At Tottenham, the Italian manager opted for a slightly different version of his back-three, a 3-4-3 or a 3-4-2-1 shape. Despite the change in shape, Conte’s back-three system has always relied heavily on the wing-backs. From creating overlaps & underlaps to delivering threatening crosses into the box, a lot is required from a wing-back in his system. In addition, they have the added responsibility of tracking back during the defensive phases of the game.

During his time with the Nerazzurri, Conte preferred Achraf Hakimi, Ivan Perisic, and Ashley Young as his wing-backs. Over the years, Conte has transformed many players and gotten the best out of them. However, since taking the managerial job at Tottenham, Conte has been unable to find the wing-back combination that could make his system flourish. The Italian manager has already tried multiple combinations of wing-backs but so far, hasn’t been convinced.

Tottenham were highly interested in bringing Adama Traore during the January transfer window, but the move could not materialize. Conte has so far deployed Sergio Reguilon, Emerson Royal, Matt Doherty, and Ryan Sessegnon as his preferred wing-backs. Out of all those players, only Sergio Reguilon has convinced with his performances. Conte has recently indicated that Dejan Kulusevski could also be an alternative for the role, although there are doubts if he would fit in that position.

Let’s take a look at some stats in order to predict the wing-back combination that could make Conte’s back-three system flourish. 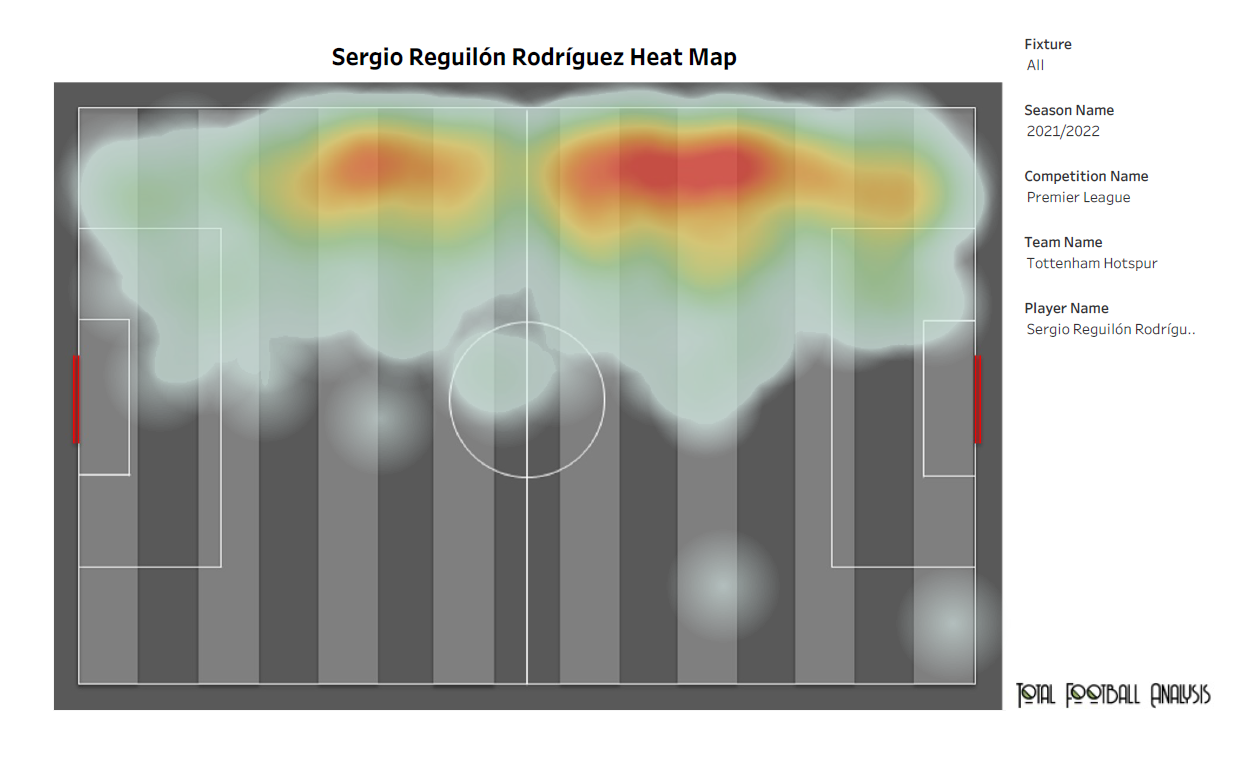 The Spanish full-back, Reguilon, is one of the few players in the Spurs squad who are naturally fit for the wing-back role. He remarked recently that he is enjoying the position because it allows him to attack more, although he added that he has to run twice the amount that he is used to. Reguilon is known for his hard work, willingness, application, and presence. His blend of attacking and defensive capabilities has helped him to perform in the role that demands a lot. In the above viz., we can see his work rate on the left flank. Reguilon has been heavily involved in his side’s attack, making timed runs from deep areas and delivering crosses. The above viz. further highlights his activity on the left flank in the attacking half. 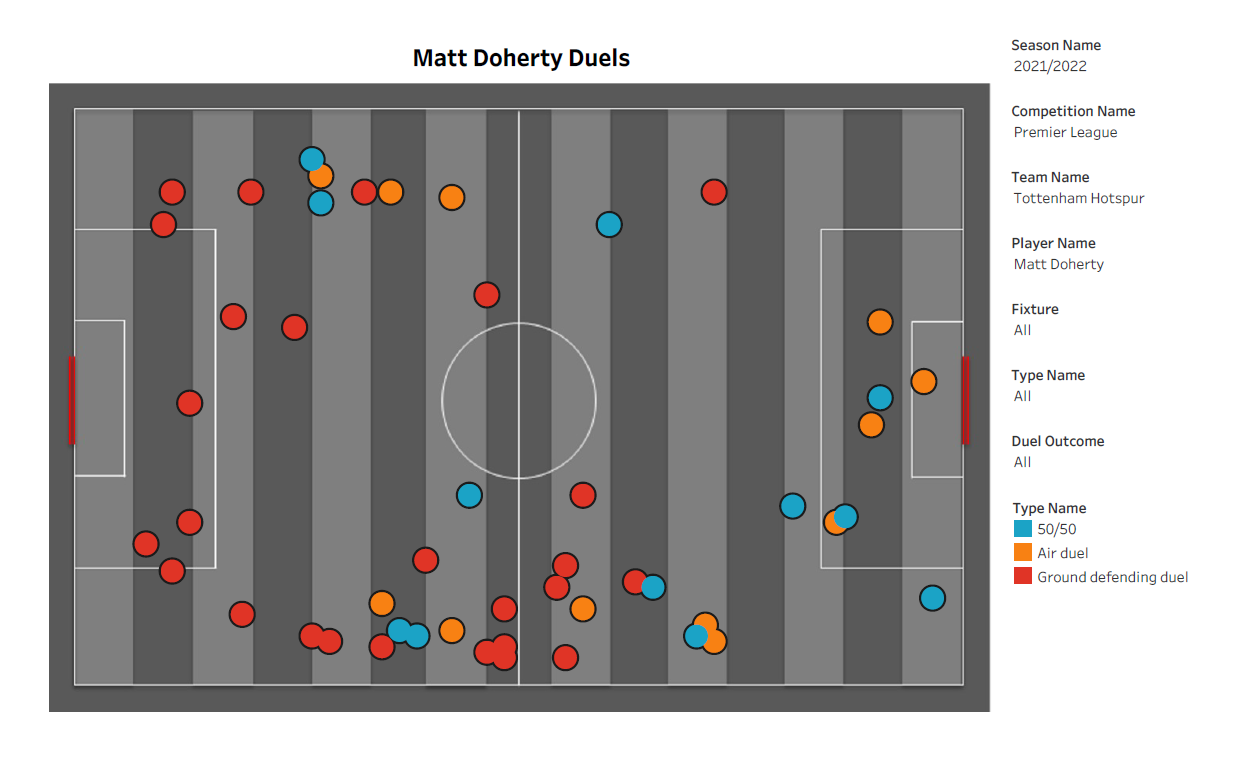 Right wing-back is the position that is Conte’s current area of concern. Matt Doherty, who featured as a right-wing back under Nuno Espirito Santo at Wolves, has been deployed by Conte in that position recently. Although Doherty has shown glimpses of his ability as a wing-back, he has been unable to feature regularly in the starting lineup. There have been doubts over Doherty’s ability to cope-up with the requirements and work rate of playing as a wing-back under Conte. However, Doherty is known to be solid defensively and can make things tick in the final third. In the above viz., we can see Doherty’s aerial and defensive duels. He has engaged in the duels in multiple areas of the pitch. 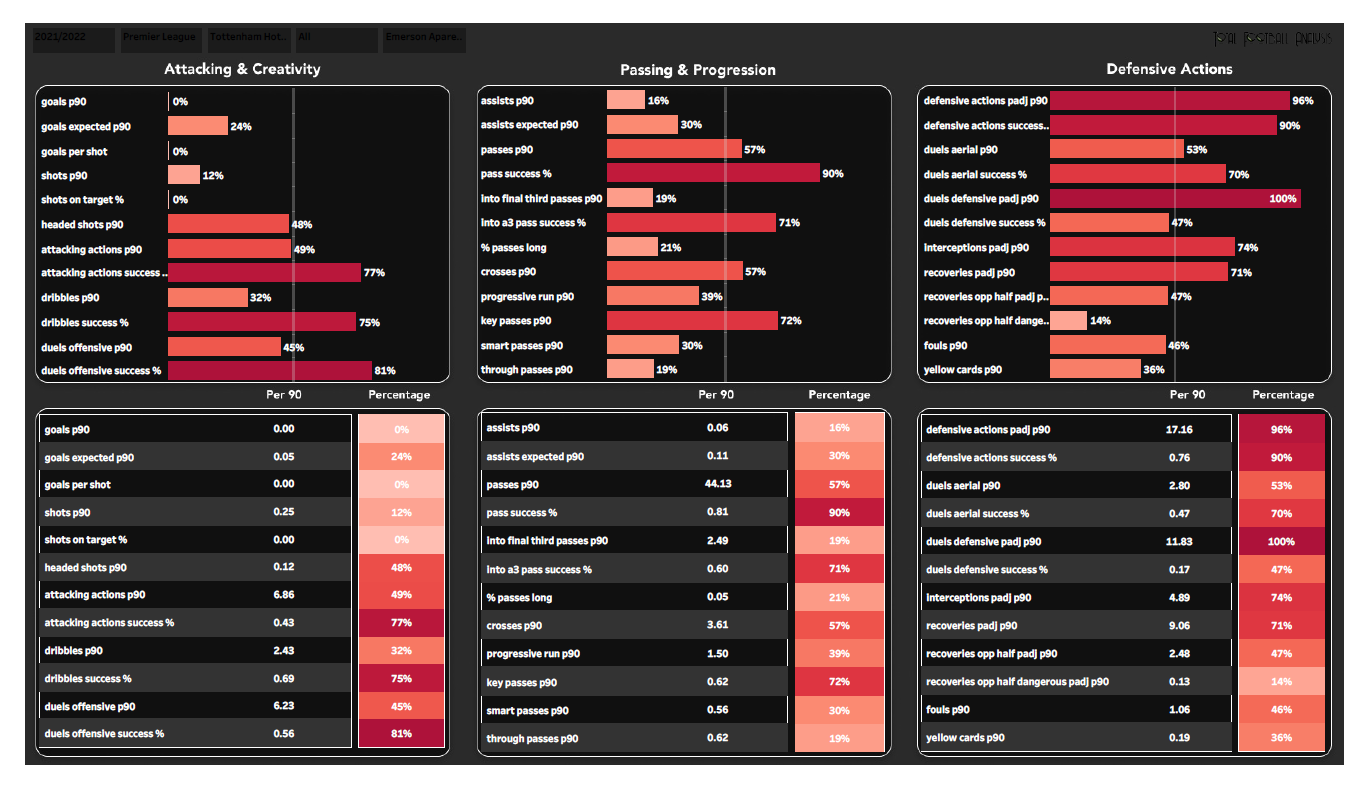 Another contender for the right-wing back role is the Brazilian right-back, Emerson Royal. Royal has already featured many times in the right wing-back role but has not convinced with his attacking output. Although he is better at pressing and running up and down the right flank than Doherty, Royal has failed to deliver threatening crosses near the opposition box, an important requirement of a Conte wing-back. In addition, he has failed to link up effectively with his attacking forwards. However, Royal has proven to be decent in the defensive phases of the game, as indicated by his defensive stats in the above viz.

While Sergio Reguilon is the best option for the role of the left-wing-back, both Doherty and Royal have been unconvincing on the opposite flank as right-wing-back. However, Royal could get the nod more frequently if he can improve on his crossing and link-up play.