Since taking the job as the head coach of Tottenham in November, Antonio Conte has indicated his desire to improve the quality of his squad. The Italian manager has also highlighted that the gap between his side and other top sides is large and that he needs to work along with Tottenham hierarchy to build and reinforce his side. While Conte was much more measured in his comments following a 0-2 defeat at the hands of Spurs London rivals Chelsea in the EFL Cup, stating that it would be difficult to resolve all of his side’s issues in the January transfer window, it is clear from his multiple statements that the Italian manager wants to bring in players suited to his needs.

One of the players that Tottenham have been linked with heavily in the last few days is Brighton wing-back Tariq Lamptey. Lamptey has also been a subject of interest for Spurs’ North London rivals Arsenal, although many reports have surfaced recently, claiming that the Lilywhites have moved ahead in the race for former Chelsea academy graduate.

With current wing-back Emerson Royal struggling in the wing-back role under Conte’s system, Lamptey is seen by many fans and pundits alike as a great fit and brilliant potential addition. The Italian manager’s back three 3-4-2-1/3-4-3/3-5-2 system is highly dependent on the wing-backs and demands a lot from them both in the attacking as well as in the defensive phases of the game.

Let’s dive into some stats to gauge whether the former Chelsea academy graduate is suited for Conte’s wing-back system. 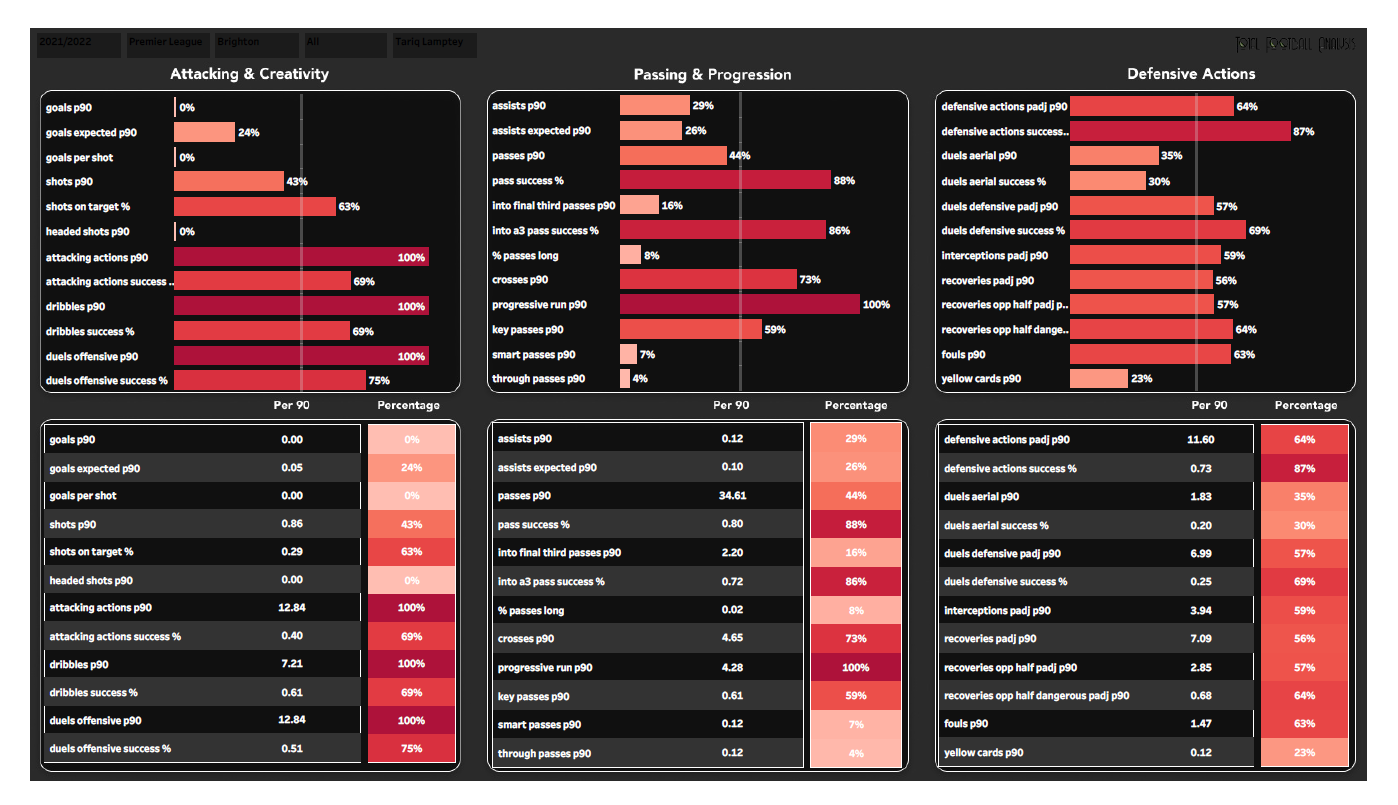 In the above chart, we can see an overview of Lamptey’s attacking and creativity, passing and progression, and defensive action stats. This season Lamptey has featured in 12 games for Brighton. Although Lamptey’s appearances have been limited due to a hamstring injury, his stats have been impressive nonetheless. From the above viz we can see that the wing-back has ranked highly in terms of attacking actions per 90, dribbles per 90, and offensive duels per 90. In terms of passing and progression, his most notable stats have been pass success rate into the attacking third, crosses per 90, and progressive runs per 90. The majority of Lamptey’s defensive stats also surpass the league median value, with the most notable stats being successful defensive actions and defensive duel success rate. 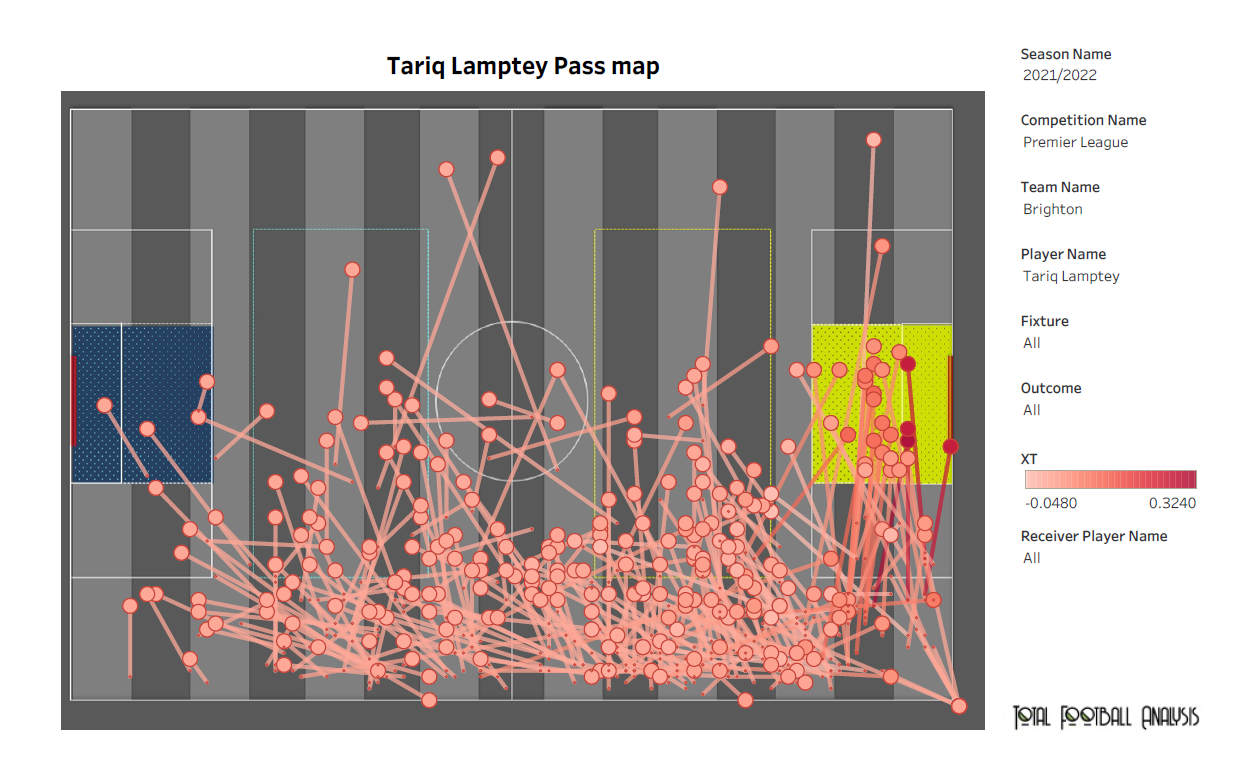 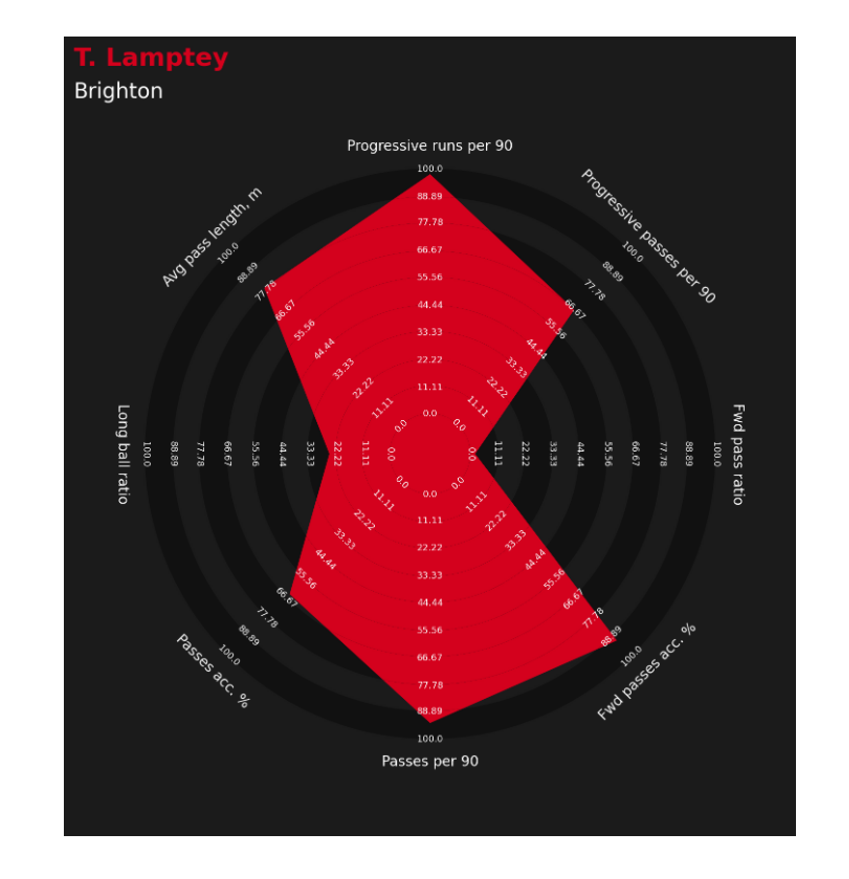 Lamptey is a speedy wing-back who brings width and speed to the game. He utilizes his speed and guile to make progressive runs into the opposition box and helps his team to get the ball forward. He is adept in dribbling and can run past the defenders. With quick feet and excellent ball control, Lamptey is a threat in the opponent’s half. From the above viz, we can see that he ranks highly in terms of progressive runs per 90 and passes per 90. His accuracy with the forward passes is also impressive. 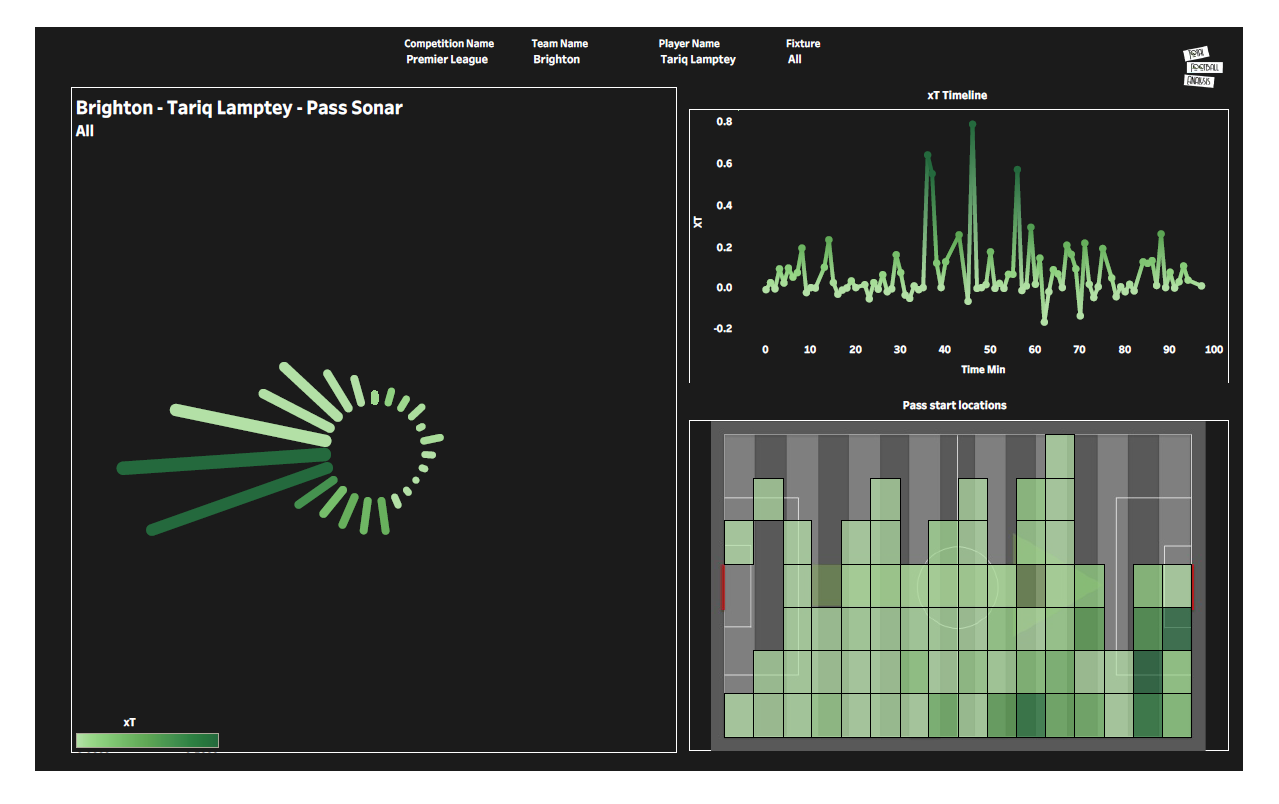 Another one of Lamptey’s greatest assets is his crossing accuracy, an asset that Tottenham are seeking intensively. He is adept at utilizing his speed and dribbling ability to get into threatening crossing positions frequently.

Based on his stats and style of play, Lamptey would be a brilliant addition to Conte’s wing-back system. Although Graham Potter has indicated his desire to keep hold of the wing-back, Brighton hierarchy would be forced to consider a sale if a bid in the region of £50m does arrive.

Leicester City vs Tottenham Hotspur Preview: xGA, match tempo and more – what do the stats say?

Transfer Talk: Could Adama Traore be a good fit in Conte’s wing-back system?

Under the microscope: Diligent Davinson – Has the Columbian improved in Conte’s back three system?

Transfer Talk: Could Adama Traore be a good fit in Conte’s...

Under the microscope: Diligent Davinson – Has the Columbian improved in...

Under the microscope: Worthy Winks – Can Harry Winks provide the...

We use cookies to ensure that we give you the best experience on our website. If you continue to use this site we will assume that you are happy with it.Ok