Son Heung-Min has been an integral part of the Tottenham Hotspur side for many years now and has 96 goals and 48 assists in 245 games in the English Premier League. The South Korean international won the golden boot in the 2021/22 season and has won the Player of the Month award thrice for Spurs. Therefore, his performance is imperative for the team’s success, and any decline in his form tends to affect his team as well. So far, Son has failed to produce the numbers this season. He has scored only three goals this season in 12 appearances. But considering that all of them came in a single match against Leicester City, his stats for the rest of the season look very slim.

We take a look at some stats to understand why a decline in form happened for Son Heung-Min. 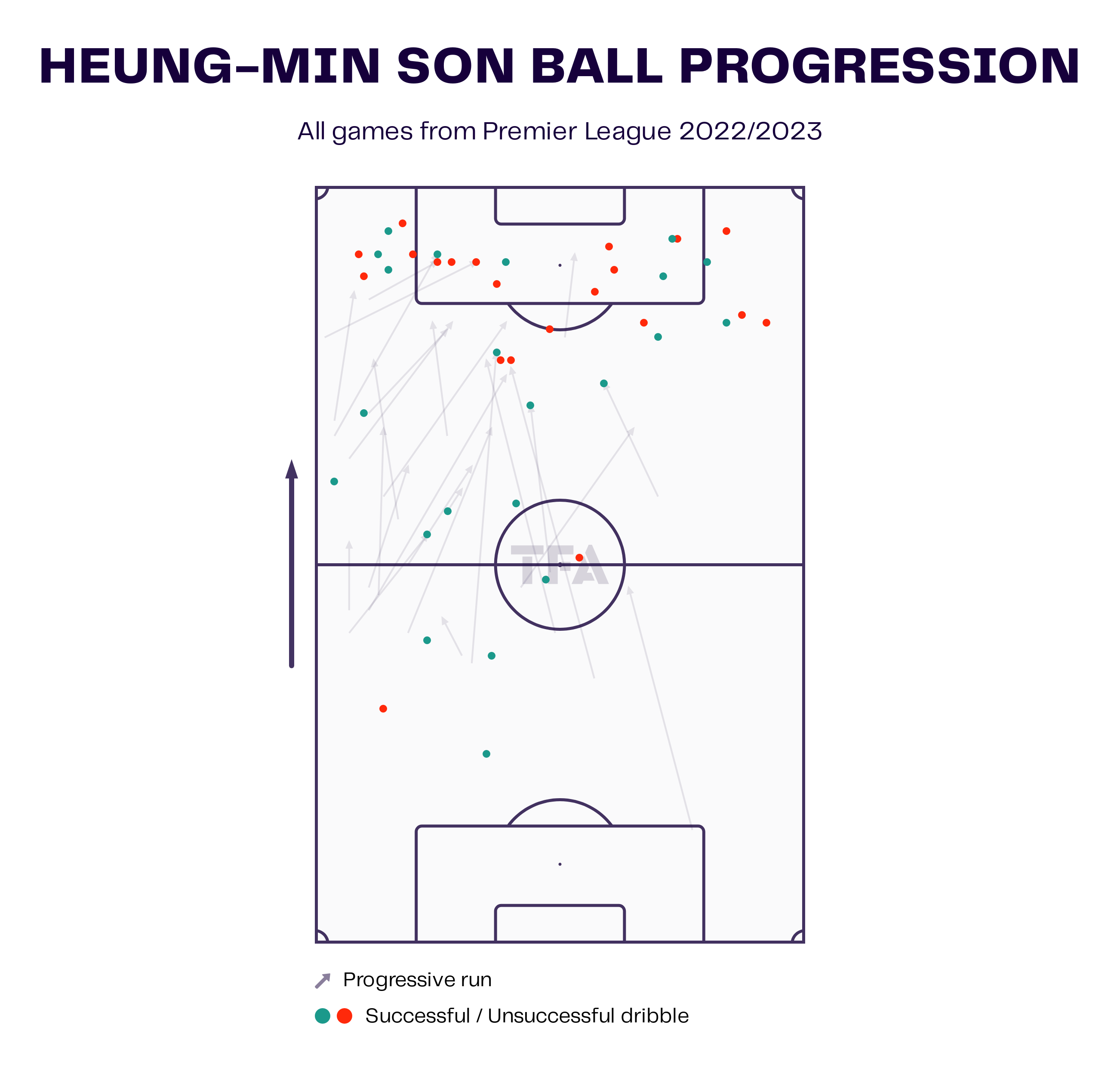 Son is a wonderful dribbler. His goal against Burnley, when he dribbled past the entire team, is proof of that. That goal also earned him the FIFA Puskas award in 2020. As a result, Son’s ability to produce brilliant runs with the ball is always expected. Last year, he averaged 3.66 dribbles per game with a 61.5% success rate. Even though he still has an average of 3.51 dribbles per game, the success rate has come down to 51.2%. His progressive runs have also come down from 2.28 per game to 2.12 per game. 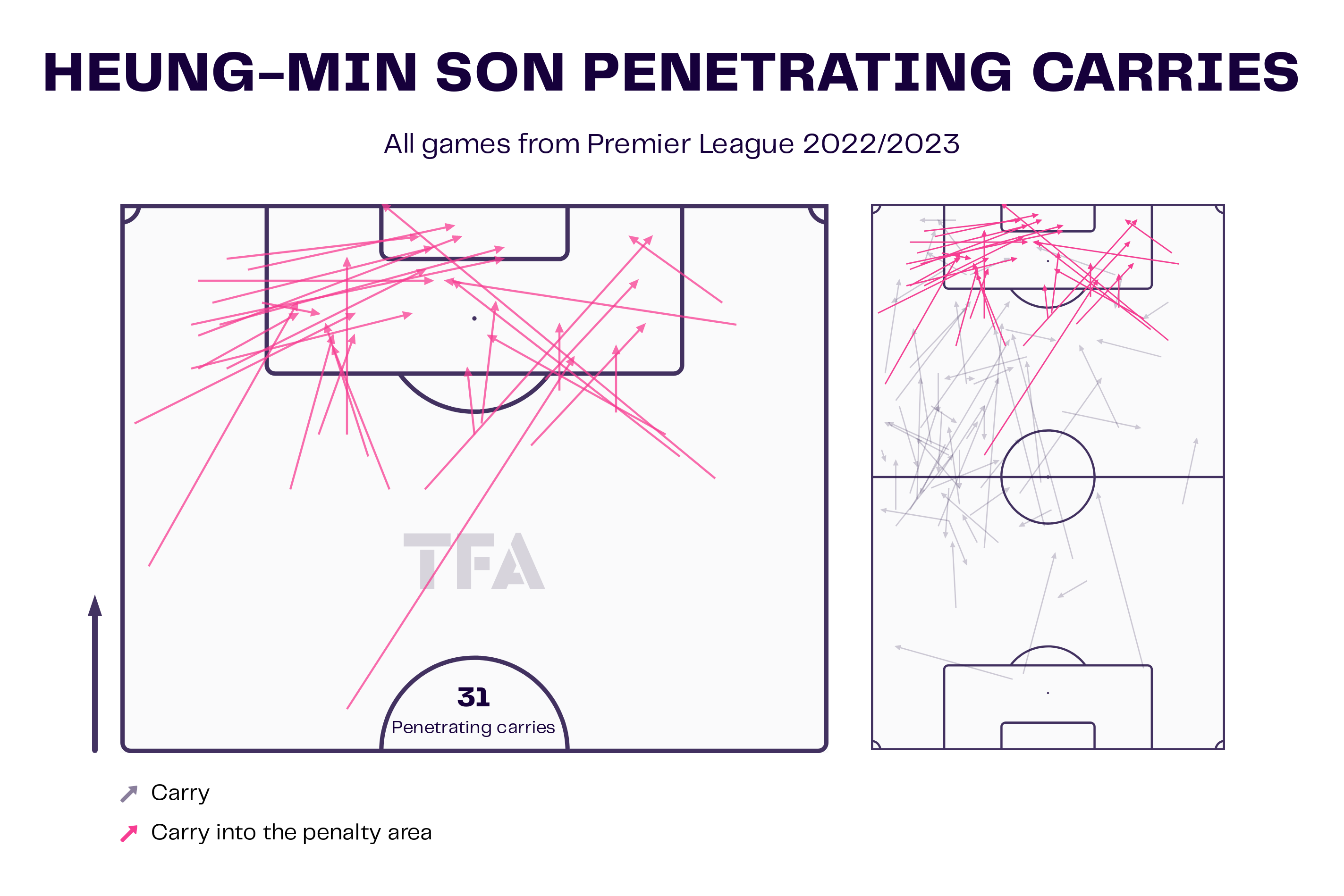 Son has produced 31 penetrating carries into the penalty box this season. Although this isn’t entirely bad and others not finishing the chances has pulled Son back from getting more assists to his name, the difference is when we look at his performance during the same period last season. 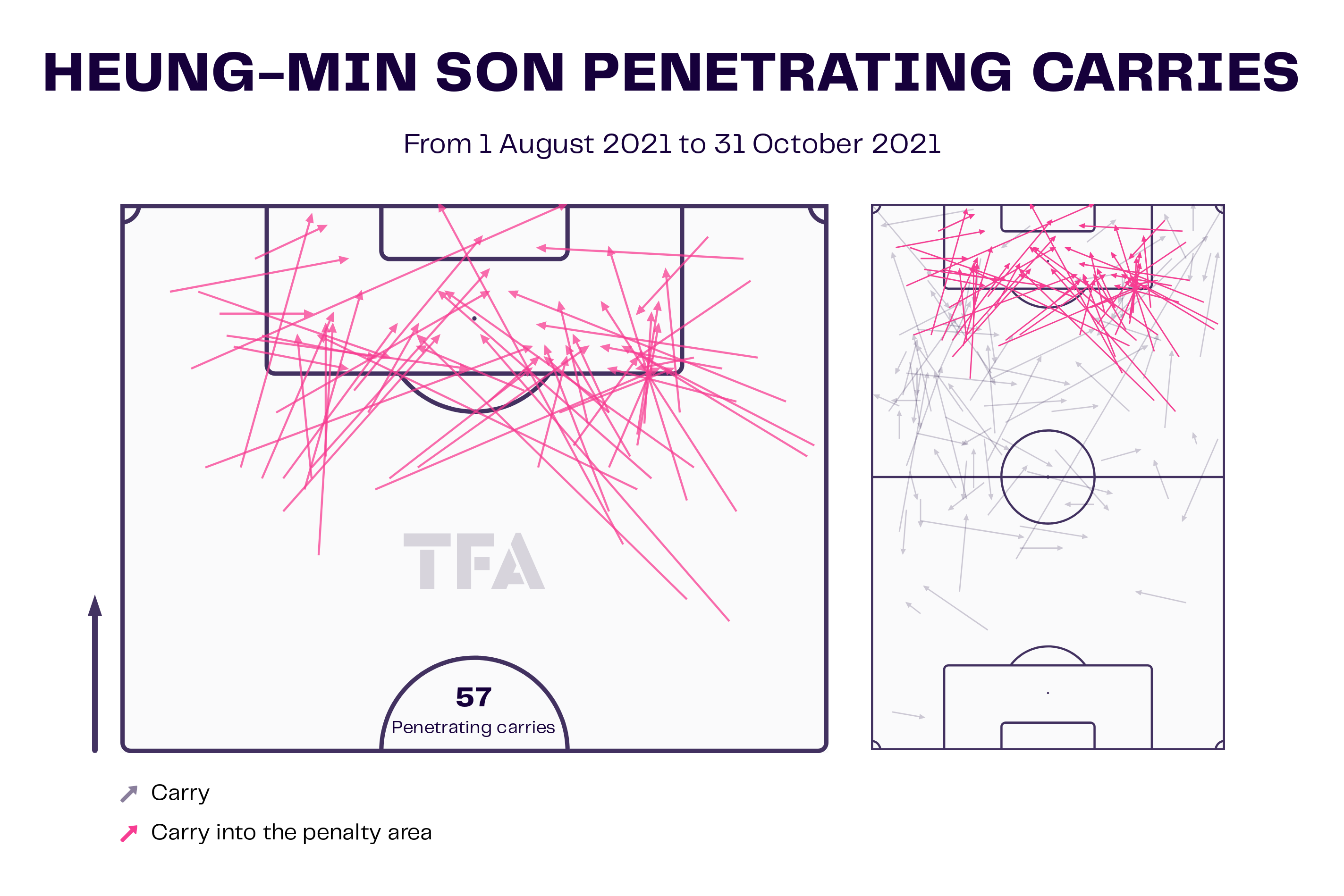 During the same period, Son had produced 57 penetrating carries into the penalty box last season. This was crucial for both Spurs and Son as he finished as the top scorer of the season with 23 goals. 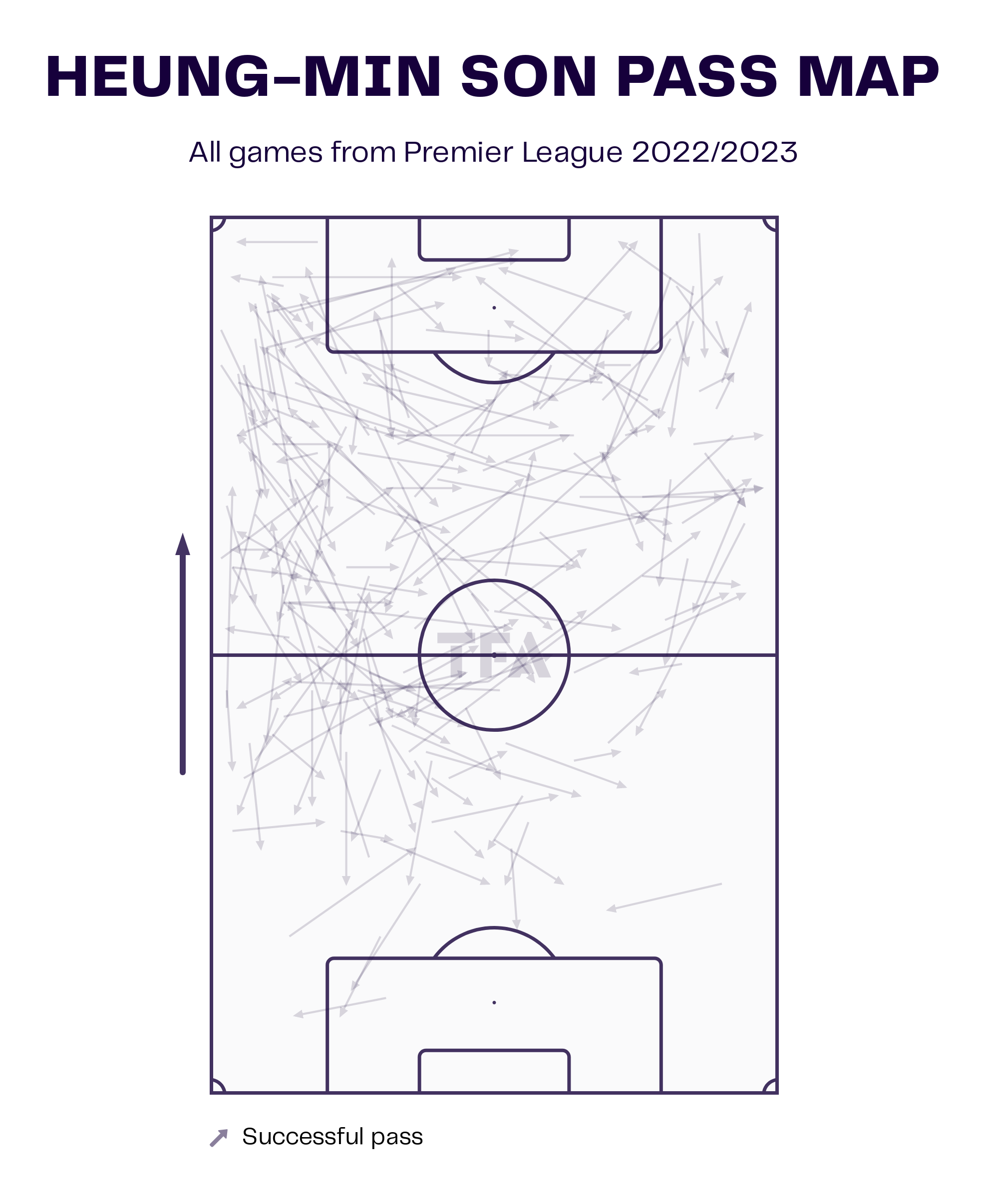 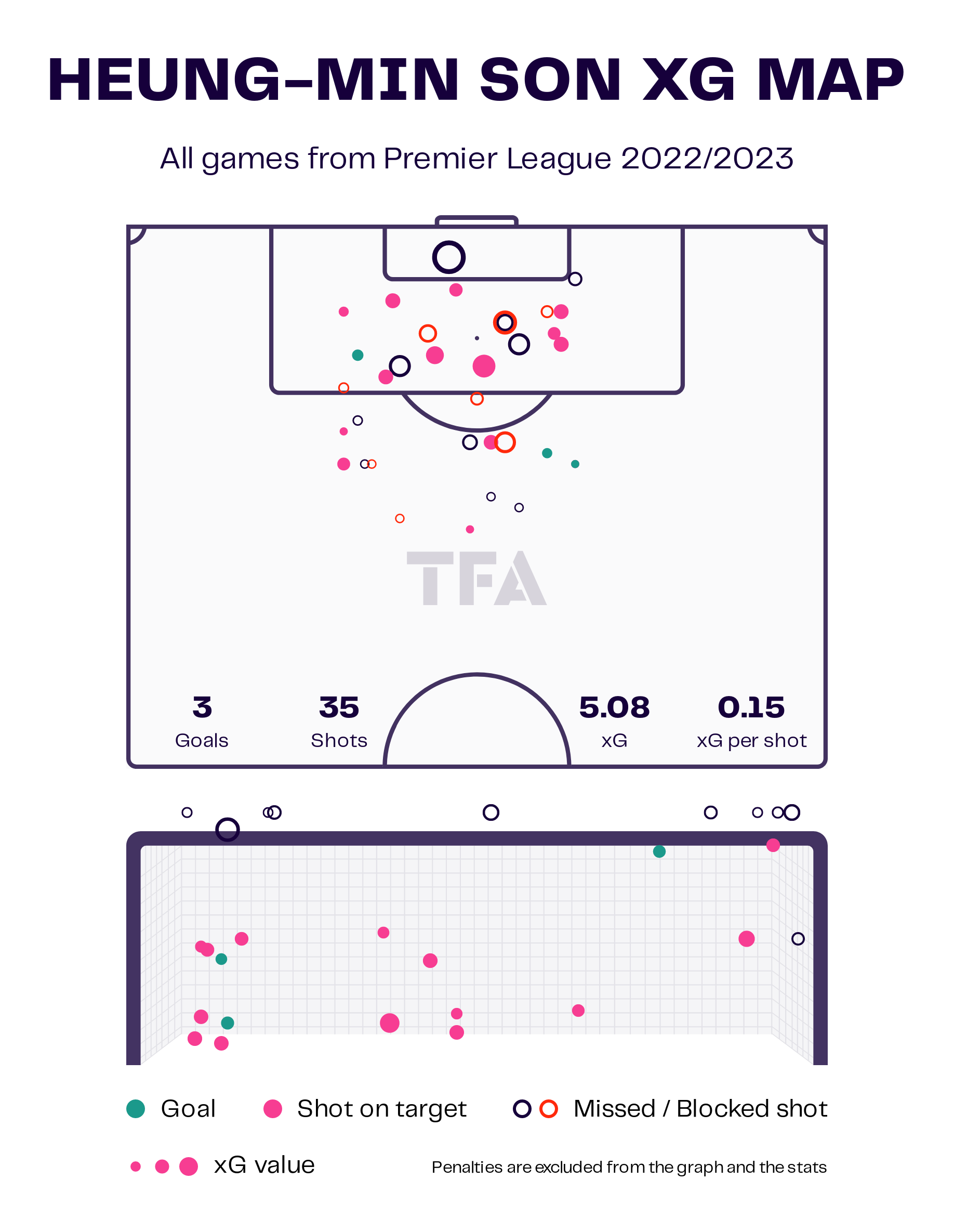 Son is an integral part of the Spurs team, and his team’s form is linearly proportional to his. From these stats, it feels like Son has everything that he needs for a successful season, but he just needs to find his accuracy back and anyone would think twice before ruling him out. His performance against Leicester City was the perfect example of that. Antonio Conte and Tottenham Hotspur’s management will be hoping Son can repeat his performance against Leicester.