Tottenham’s form in the Premier League has been shaky in the past few weeks. They have lost back-to-back matches at home within four days as they slumped to a 2-3 defeat against Southampton before falling 0-2 against the Wolves. As a result, Antonio Conte’s side are now placed eighth in the league with 11 wins, three draws, and eight losses in 22 games and are behind fourth-placed Manchester United, although with two games in hand.

In the recent defeat against Wolves, Conte took off Ryan Sessegnon in the 28th minute after his side went down by two goals. The 21-year-old youngster was sloppy with his passes and also lost possession multiple times. Many fans are now pointing out that this might be the end of Sessegnon’s time at Spurs. During the start of Conte’s reign as manager, there were suggestions that Sessegnon could very well establish himself as a left wing-back. After returning from a knock, the 21-year-old winger made his first appearance of the season under Conte in the match against Leeds. Since then, he has featured in just four matches, which indicates his failure to impress his manager.

Tottenham had initially started the match against the Wolves in a 3-4-3 formation but later changed it to 4-2-3-1 as Tottenham were overrun in the midfield and Sessegnon was sacrificed to change the tactics. While Conte did console the winger, coming off after 28 minutes of action could affect the confidence of a young player.

Let’s take a look at his stats to gauge how Sessegnon has performed and whether he has a place in Conte’s starting XI in the future. 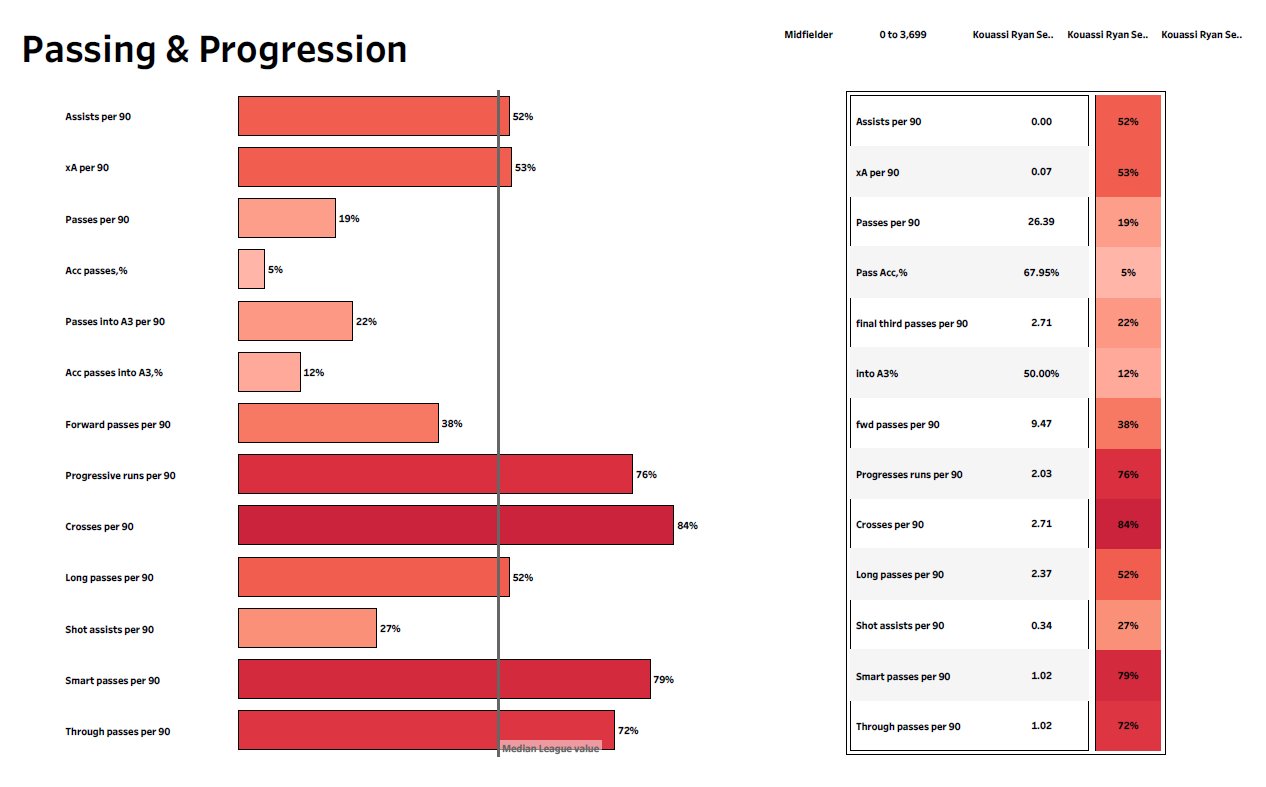 In the above viz., we can see Sessegnon’s passing & progression stats. Although he has been afforded limited appearances, the 21-year-old has not performed up to the level that Conte demands from his players, specifically from wing-backs. We can see that Sessegnon has misplaced quite a lot of his passes, as was evident in the game against Wolves as well. He has also fared below average in terms of forward passes per 90 and accurate passes into the attacking third. During his time in the Championship, Sessegnon displayed positional intelligence. During the attacking phases, Sessegnon demonstrates the awareness to occupy the right spaces to maintain the flow of the build-up phase. 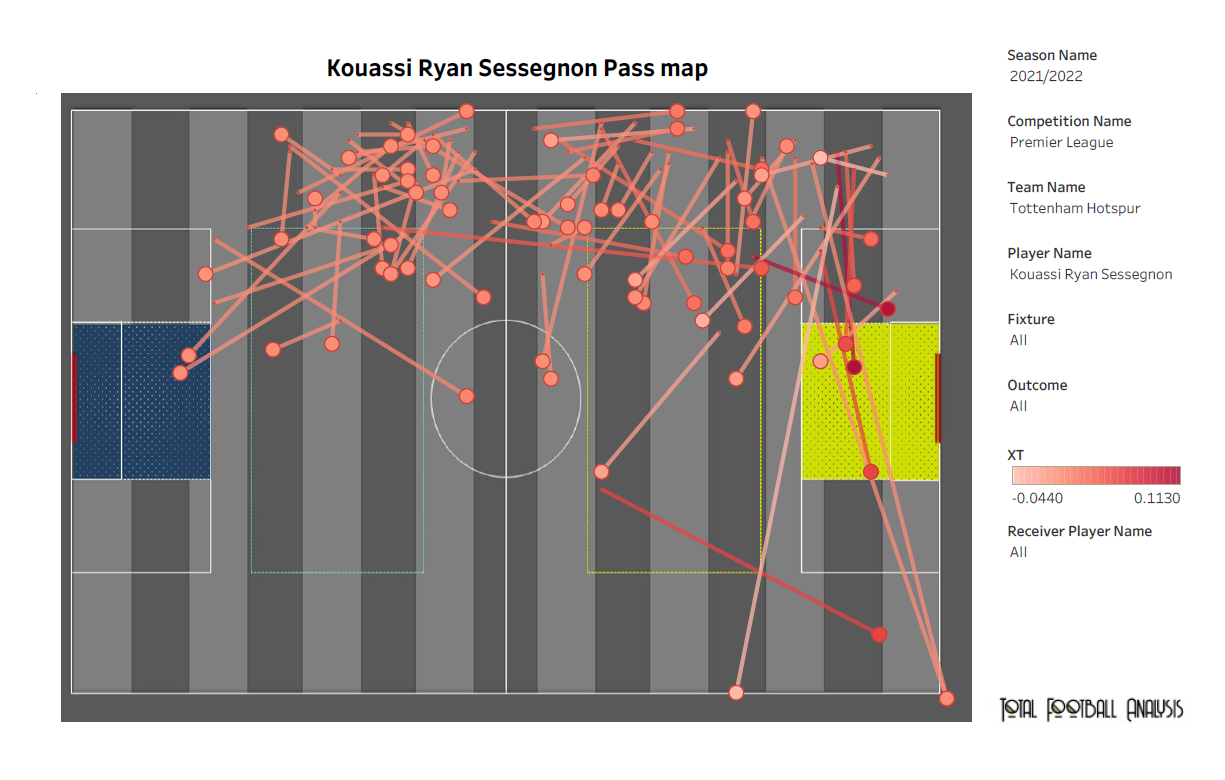 The above viz. highlights the areas where the winger has delivered his passes. We can see that Sessegnon has delivered a few threatening passes from the wide areas. One of the most important roles of a wing-back in Conte’s formation is to provide the width and deliver threatening crosses into the box. So far, Conte has still not found out his best wing-back combination. Furthermore, we can see that Sessegnon’s forward passes have been lacking in his appearances. 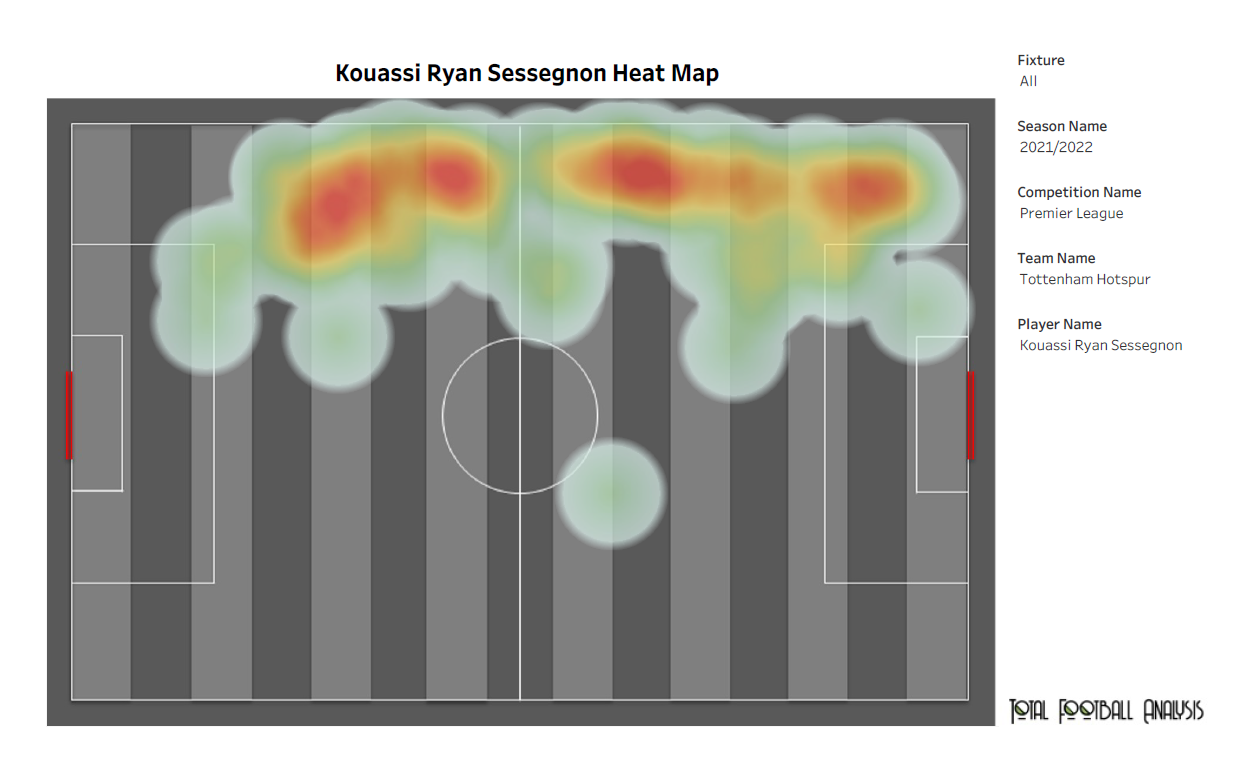 In the previous seasons, Sessegnon displayed his versatility by featuring in multiple roles on the left flank while he also featured on the right. Although, his favored position is that on the left, owing to his experience of playing in that position. Despite failing to inspire Conte’s confidence, Sessegnon has displayed an impressive work rate on the left. The Italian manager’s wing-backs are usually high industry players, who are capable of tracking up and down the flanks during the entirety of the match.

While still 21-years of age, Sessegnon is still maturing as a player. Although it is looking unlikely that he will get a chance to feature in Conte’s starting XI regularly. Perhaps a loan move could provide some much-needed game time and confidence to the talented winger.