Everton endured a miserable 2021-22 campaign under Rafael Benitez and Frank Lampard as they finished 16th on the points table. The Toffees had a record of 11 wins, six draws and a woeful 21 losses and ended the season with a goal difference of -23. They were embroiled in a relegation battle until the penultimate matchday of the season. However, there was one shining light for the Merseyside team in blue, and it came in the form of Brazilian star, Richarlison. And according to some reports, Tottenham Hotspur want to acquire the Brazilian attacker. 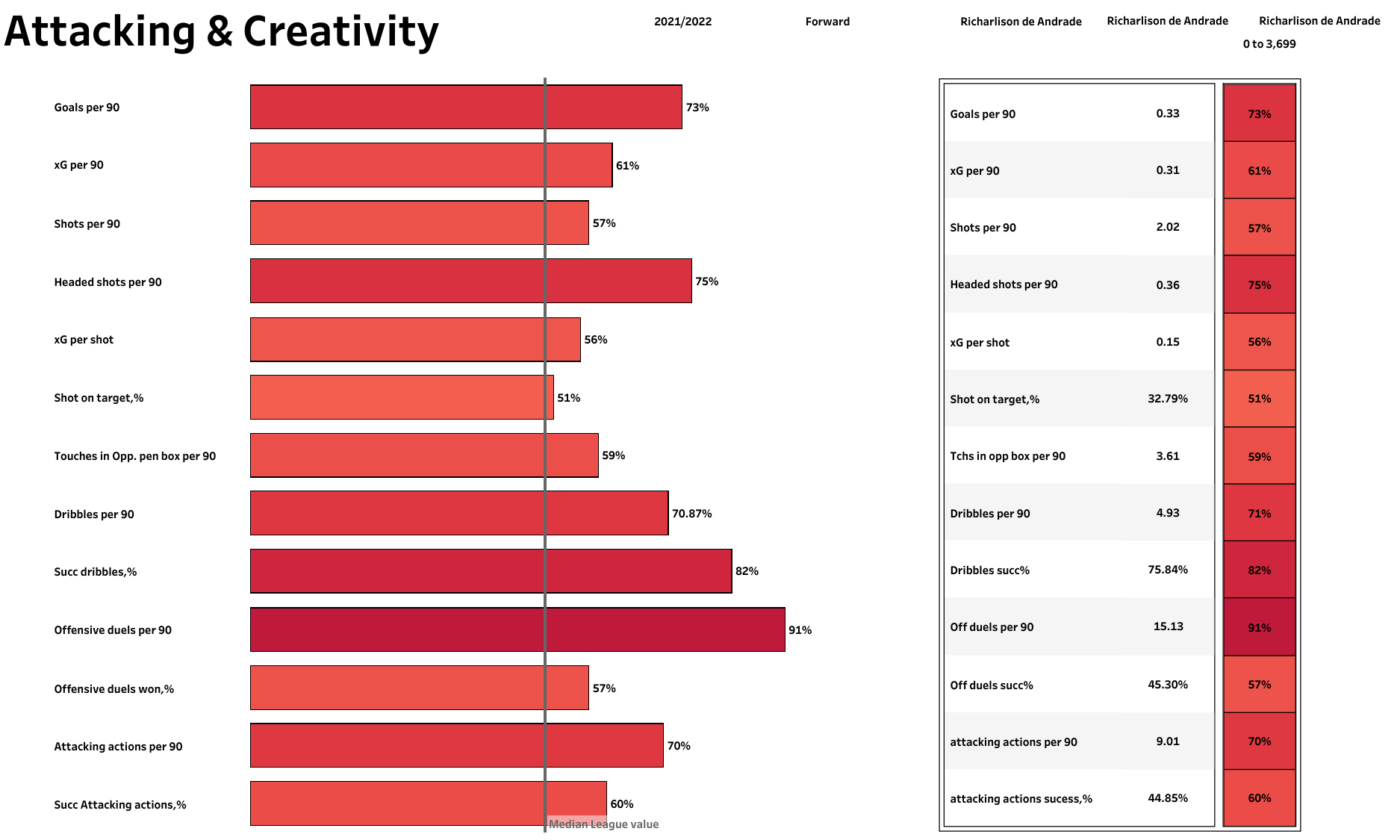 Richarlison featured for Everton in 30 Premier League matches last season, playing for 2,523 minutes. He scored 10 times, which is exactly at the rate of one every three games or 0.33 goals per 90. He slightly outperformed his xG per 90 output of 0.31. The Brazilian attacker attempted 2.02 shots per game, which was the highest among the Toffees regulars and hit just under one-third of his shots on target. With just under five dribbles per 90 and a success rate of more than three quarters at that, Richarlison provided a direct threat to the opposition defenders. 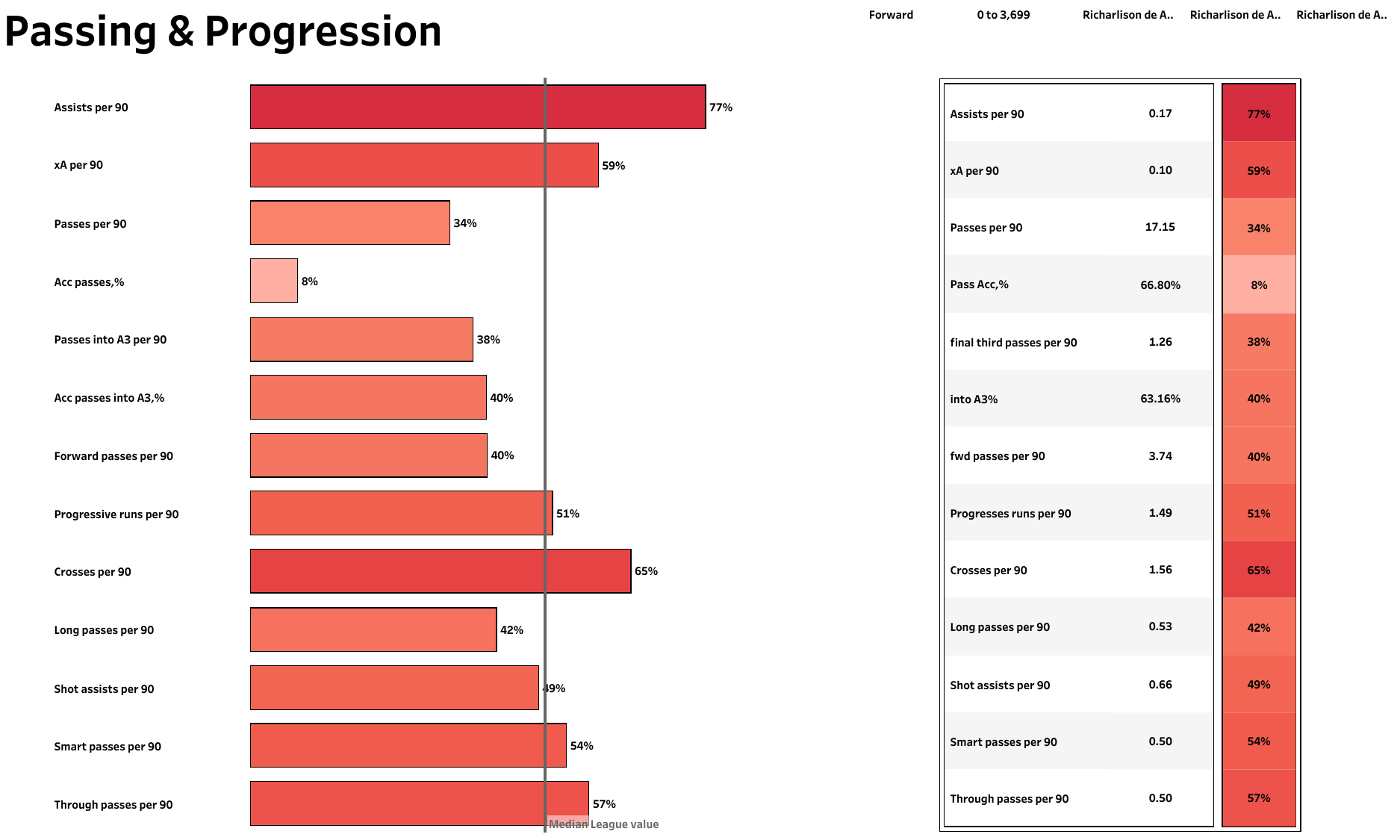 In addition to his 10 goals, Richarlison provided five assists, which means that he had a goal involvement every 168 minutes. He gave assists at a rate of 0.17 per 90, higher than what xA estimated, which was 0.1 per 90. The Brazilian was not an active player for Everton in build-up play as he attempted just over 17 passes per 90 at an atrocious pass accuracy of 66.8%. This pass accuracy ranked him in the bottom 8% among forwards. However, he had to shoulder almost the entire creative burden for his side. Richarlison completed 1.56 crosses per 90, which ranked him above average for forwards. 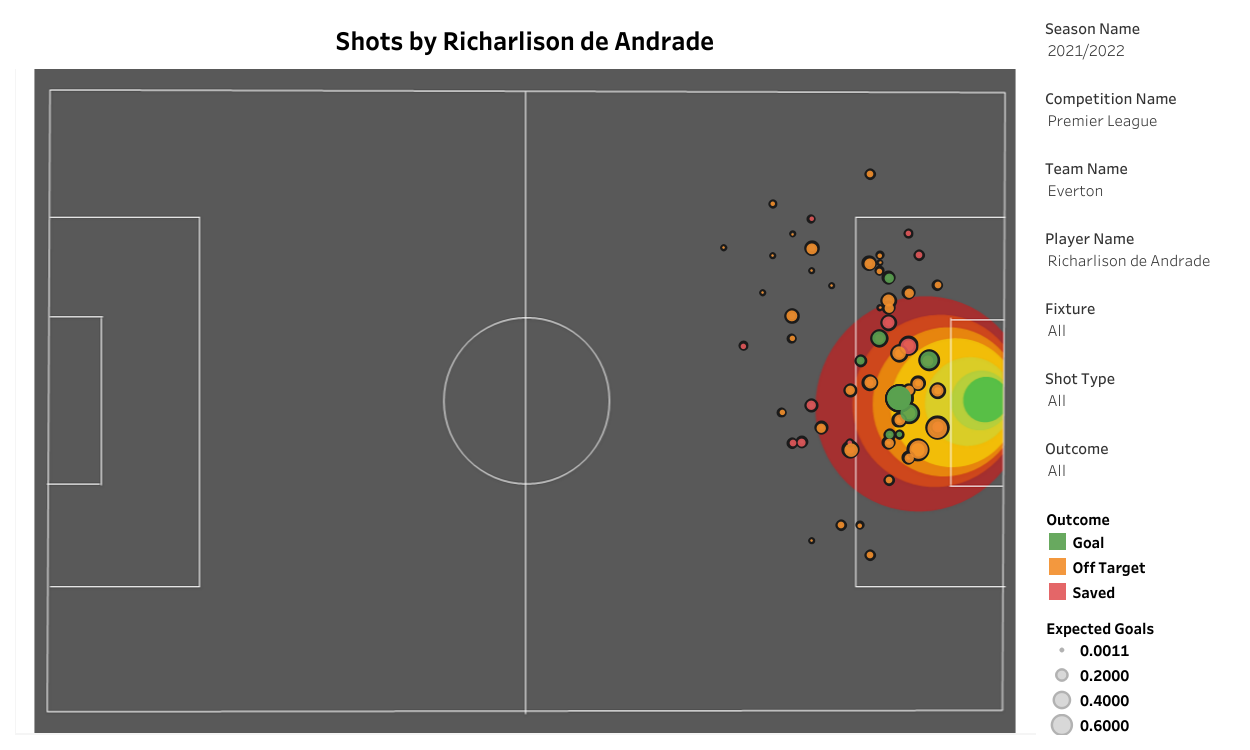 As seen from the above shot map, Richarlison scored all of his 10 goals from inside the box, three of which were penalties. He missed a couple of big chances from close range but the majority of his shot attempts came from inside the opponents’ penalty area, and his average shot distance was 15.8 yards from goal, according to FBREF. Richarlison took 70 shots, meaning he required seven attempts to score a goal on average. 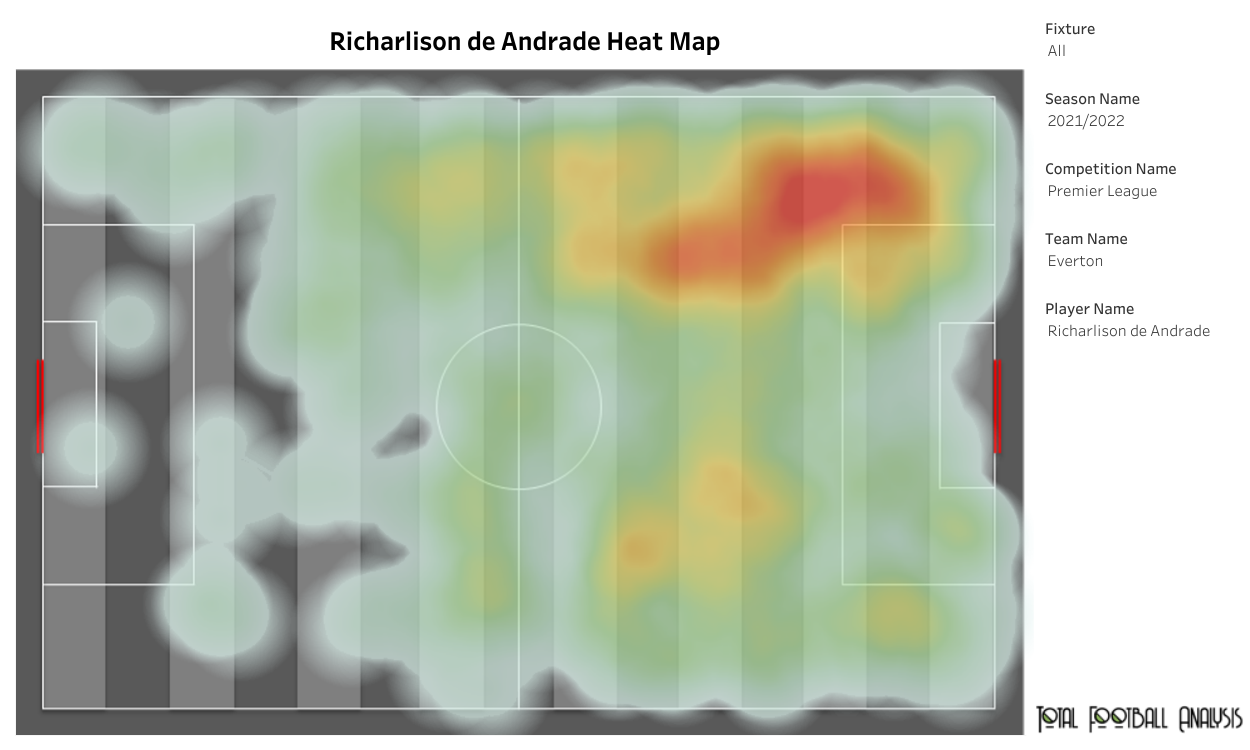 As displayed in the above heat map, Richarlison was most active when he was stationed on the left wing. However, he is capable of playing across the front line. The Brazilian received 5.07 progressive passes per 90, ranking him second in the Everton squad for players with at least 1,000 minutes played. He also made 3.43 progressive carries per 90. He did not neglect his defensive duties either as he attempted over 21 pressures per 90.

Richarlison was one of the most influential players for Everton this season as without him, the Toffees might well have been relegated from the Premier League. However, as they have escaped relegation, it would be difficult for any club, not just Tottenham Hotspur, to negotiate with Everton for the services of the Brazilian attacker.