The 2022-23 Premier League season is just a few days away from starting. One of the Saturday afternoon kick-offs sees a game between Tottenham Hotspur and Southampton at the Tottenham Hotspur Stadium. Spurs have had quite a big rebuild this summer under Antonio Conte, making as many as five signings and bringing one on loan. As the North London team is also competing in the UEFA Champions League after a two-year absence, it needs the strength in depth to challenge on multiple fronts. Southampton, on the other hand, have also signed exciting youngsters this summer, each of them costing less than €15 million. 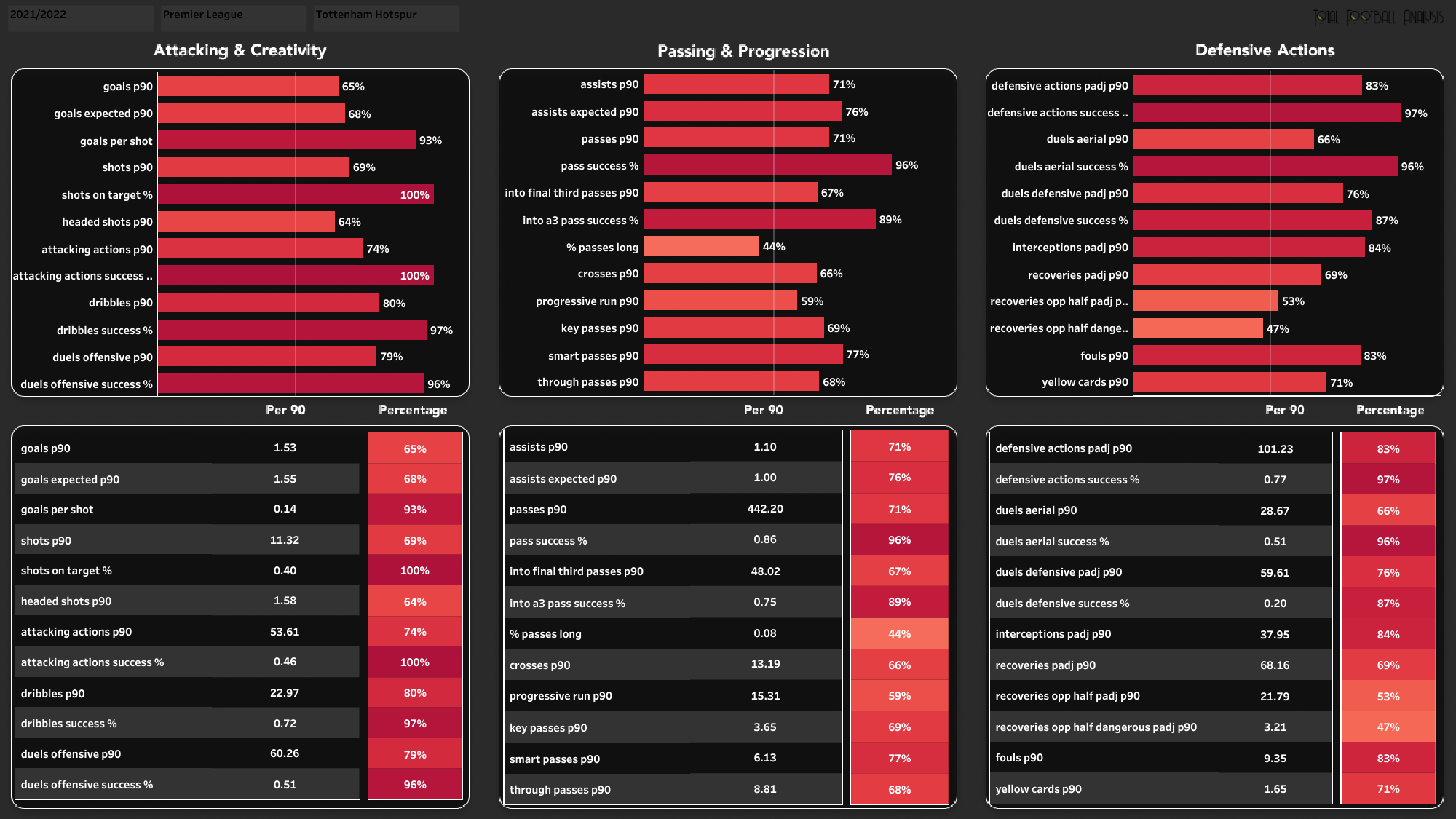 Tottenham ended their two-year wait for a return to the Champions League by finishing 4th. They had a record of 22 wins, five draws, and 11 losses and collected 71 points. Their goal difference was +29, almost three more than expected. Spurs marginally underachieved on xG, but not by much, and they overperformed in xA. With 0.14 goals per shot, the North Londoners were placed in the top 7% of this category. Their only area of mediocrity was in long passing as they completed only 8% of their attempted long balls. They won 51% of their contested aerial duels last season. 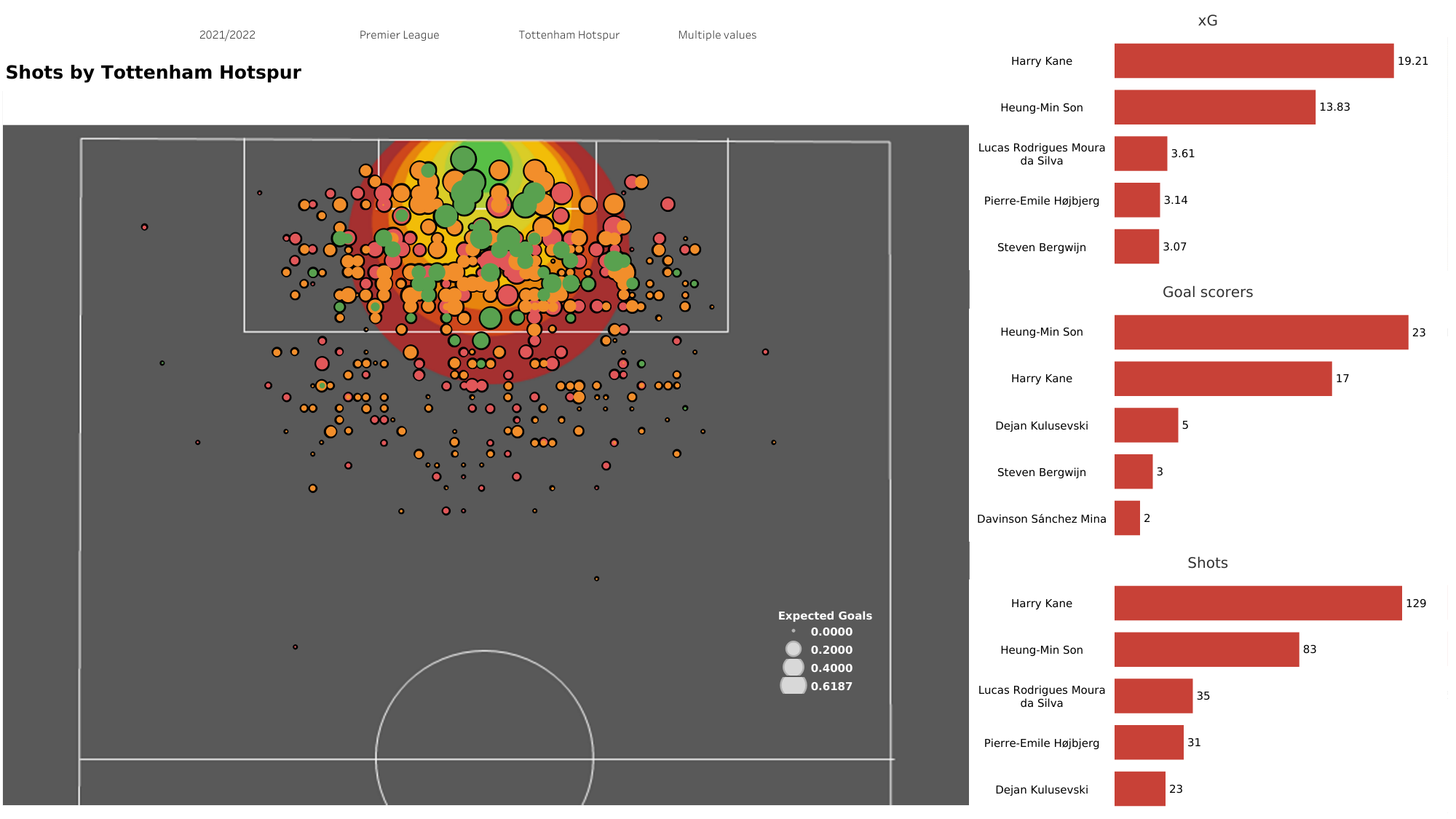 Above is the shot map of Tottenham Hotspur last season, not including penalties. There were quite a few big chances with an xG value of 0.4 or greater that were missed by the Spurs players. This shows why Harry Kane underachieved on his xG of 19 by scoring two fewer goals. On the other hand, the Korean superstar, Son Heung-Min, netted 23 goals against an xG of only 14, winning the Premier League Golden Boot in the process (jointly with Salah). What is even more impressive is that he never took penalties. On average, the team needed 7.79 shots to score a goal. 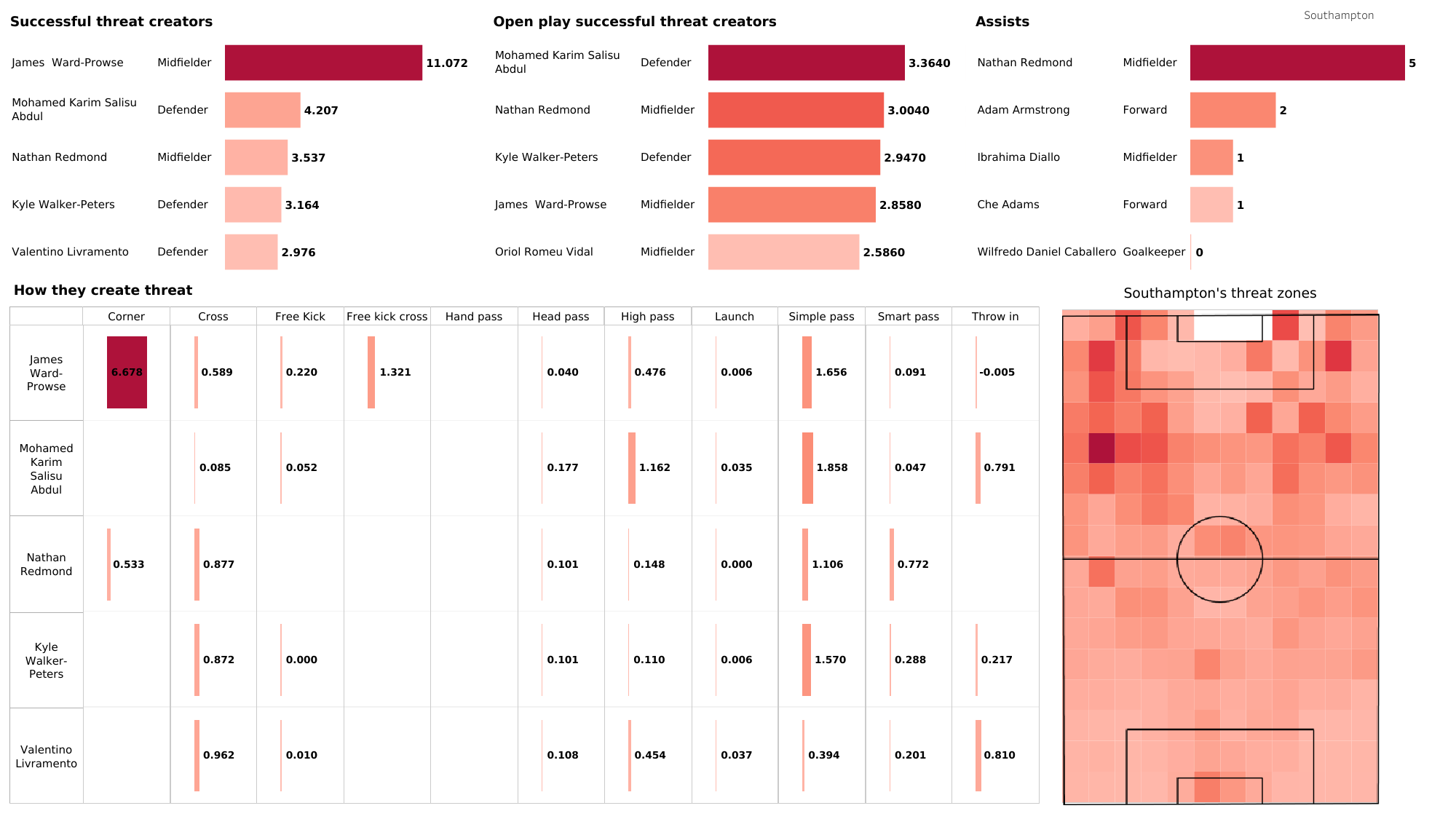 Southampton ended the last campaign in 15th place on the points table. Their record stood at nine wins, 13 draws and 16 losses, thus earning 40 points. The Saints scored 43 goals and conceded 67, giving them a goal difference of -24, which, when measured against xGD, is twice as bad (xGD of -12). James Ward-Prowse was the team’s top goalscorer with 10 goals, and the joint top assist provider alongside Nathan Redmond with five assists. He was the most successful threat creator for the Saints last season. However, most of his threats came from corners. From open play, Mohamed Salisu generated the majority of the threat.

Tottenham Hotspur are the favourites to win this match and get their campaign off to a good start. However, the last meeting between these two teams saw Southampton shock Spurs at home with a 3-2 win. So, Antonio Conte must be ruthless if his team is to win the game.

Transfer Talk: James Maddison – Why are Spurs linked to the Leicester City midfielder?