Fifth-placed Tottenham Hotspur host 17th-placed Burnley on Sunday in the penultimate matchday of the 2021-22 Premier League. In the reverse fixture back in February of this year, Burnley shocked Spurs by winning 1-0 at Turf Moor, where Ben Mee scored the only goal of the game. Heading into this clash, Tottenham won the North London Derby in style, defeating Arsenal 3-0, and Burnley lost 1-3 at home to Aston Villa. 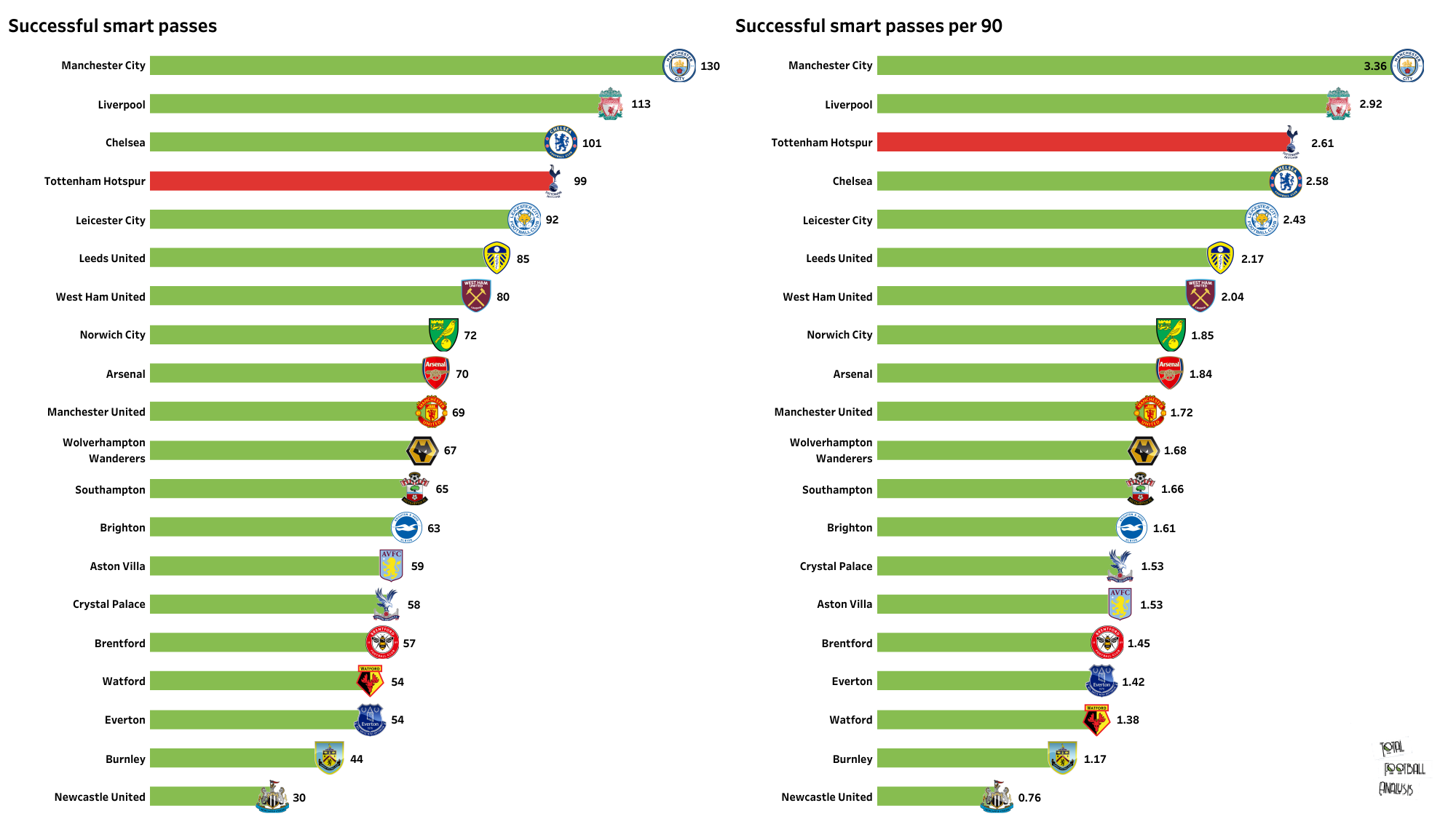 Tottenham Hotspur come into this game having thrashed their North London rivals Arsenal by 3-0. A Harry Kane brace and a Son Heung-Min strike were enough to extend Arsenal’s winless run at away North London derbies to eight years. This win propels Spurs to just one point within Arsenal’s reach in the fight for the top four. Tottenham’s record stands at 20 wins, five draws and 11 losses, with a goal difference of +23. In this season of the Premier League, Tottenham Hotspur have completed the fourth-most smart passes, with 99, and they rank third in smart passes completed per game with 2.61. 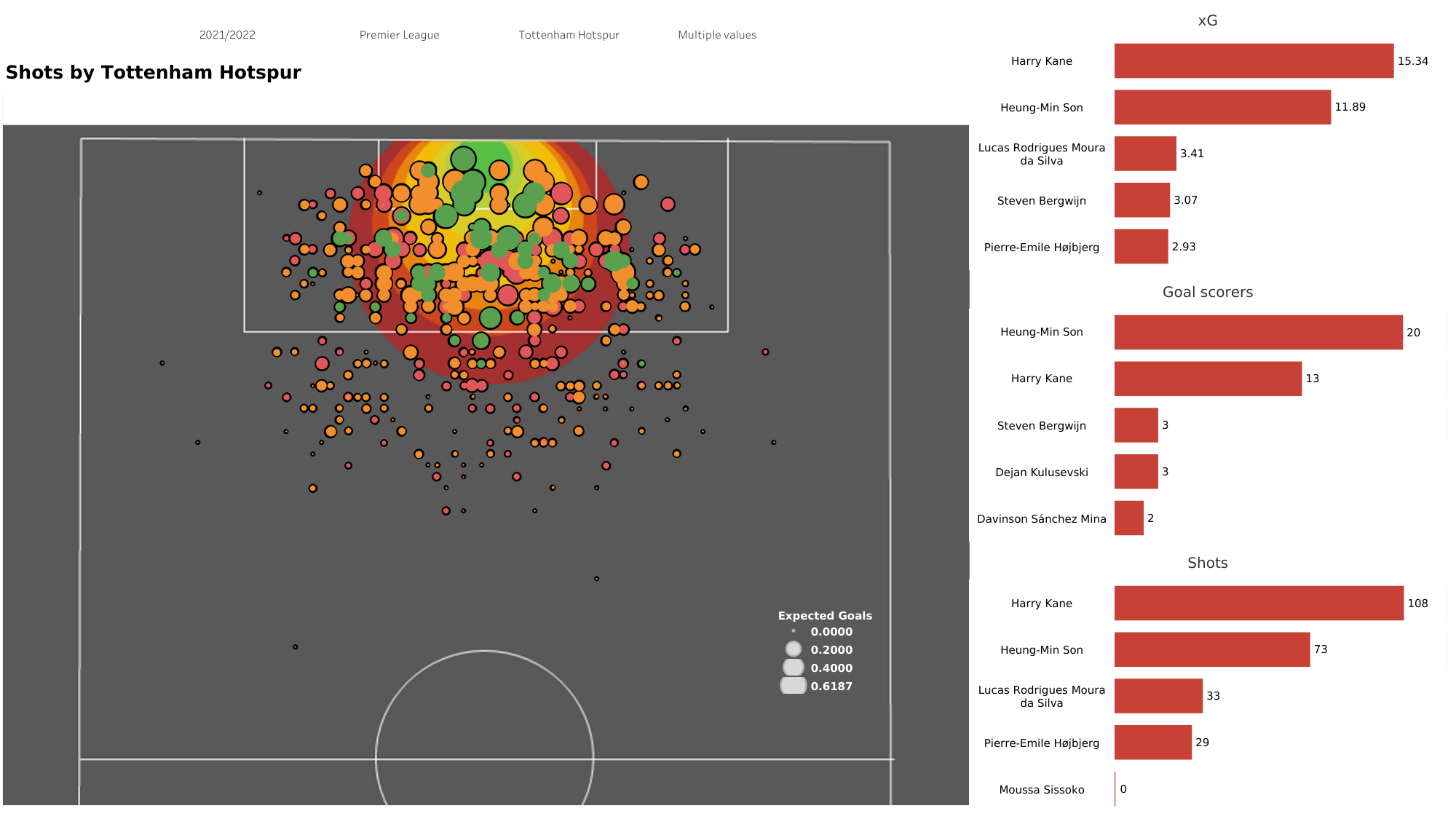 Above is the shot map of Tottenham Hotspur in this Premier League season, excluding  the penalties. Spurs have taken 452 shots and netted 57 goals (excluding own goals scored by opponents). This means they have needed 7.93 shots to score a goal. Son Heung-Min is the team’s top goalscorer, with 21 goals to his name from just 77 shots. Harry Kane, on the other hand, is not shooting efficiently by his standards, as he has scored 15 times from 119 shots, or nearly eight shots per goal scored. 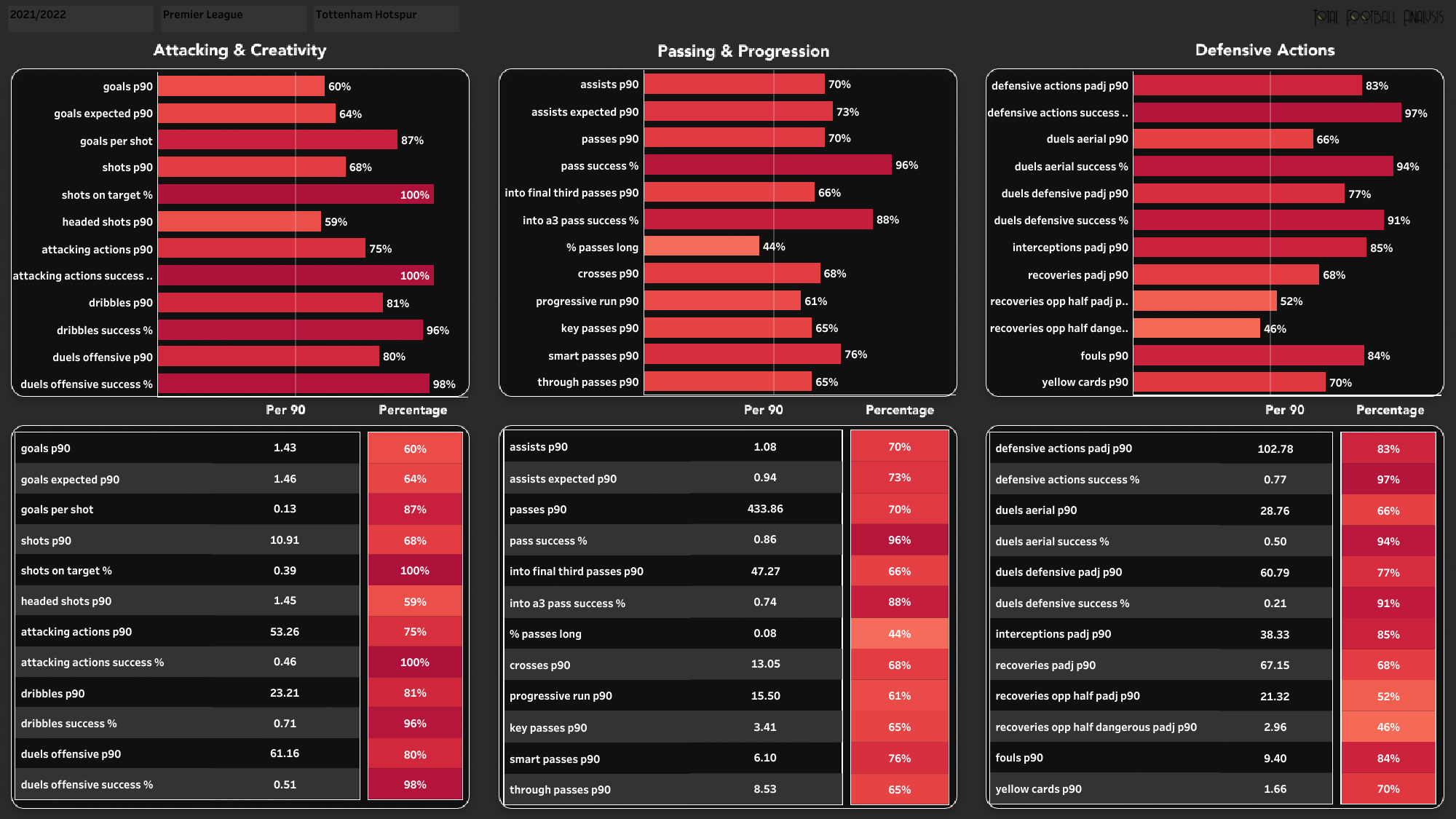 Shown in the above visual are Tottenham Hotspur’s performances in the 2021-22 Premier League relative to the rest of the league. Spurs have performed above average in several categories. But they are slightly underperforming on their xG per 90 of 1.46, scoring just 1.43 goals per 90. Spurs rank in the 66th percentile for passes into the final third per 90, with 47.27, but they also rank in the top six percent for aerial duel success rate. 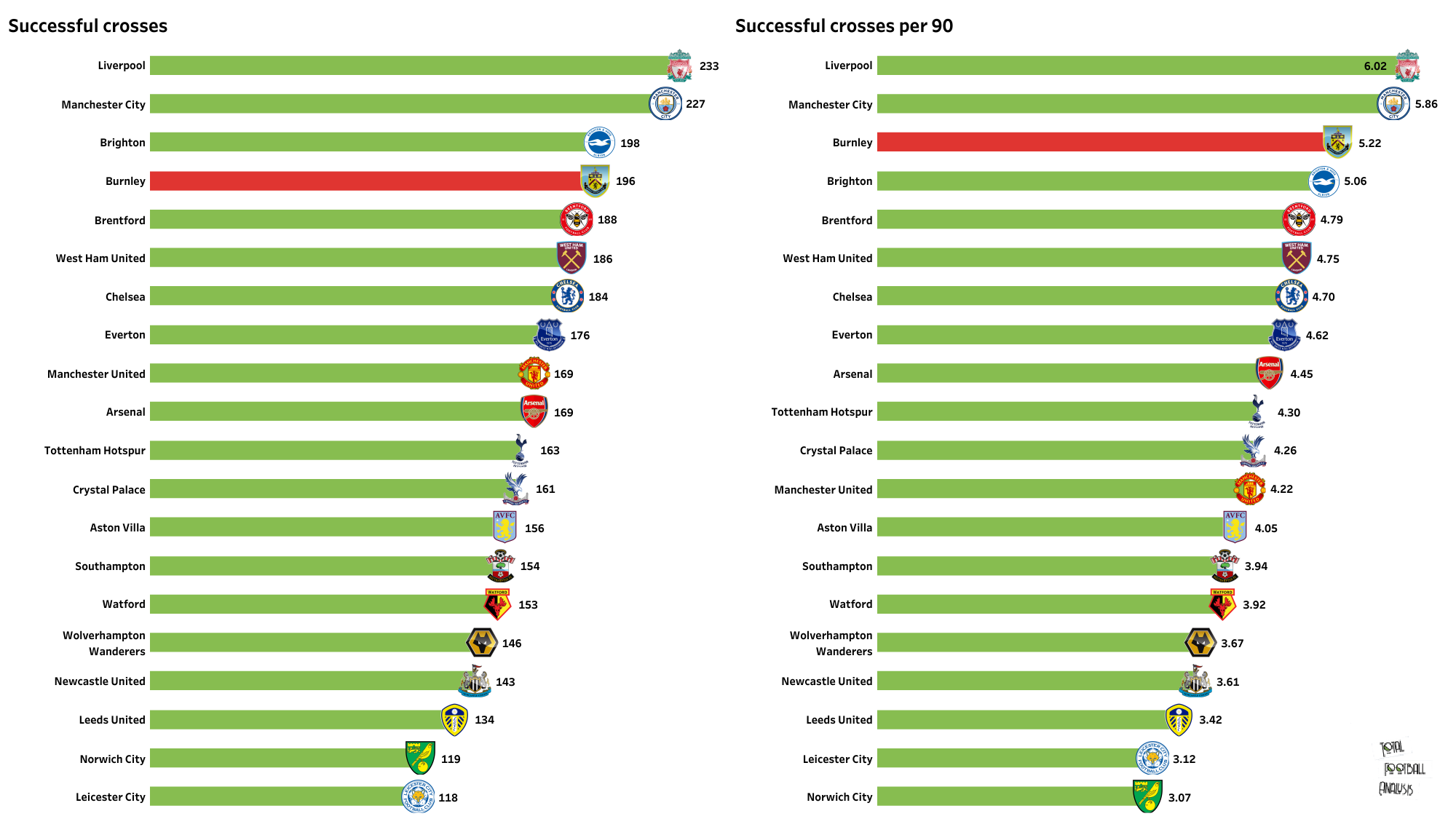 Burnley head into this match having lost 1-3 at home to Aston Villa. Maxwell Cornet scored the goal for Burnley in what proved to be nothing more than a consolation. This defeat leaves Burnley with seven wins, 13 draws and 15 losses to their name and a goal difference of -17. The Clarets have the fourth most successful crosses of any team in the league this season (196), meaning they average 5.22 successful crosses per 90. So, Tottenham should be wary of this. 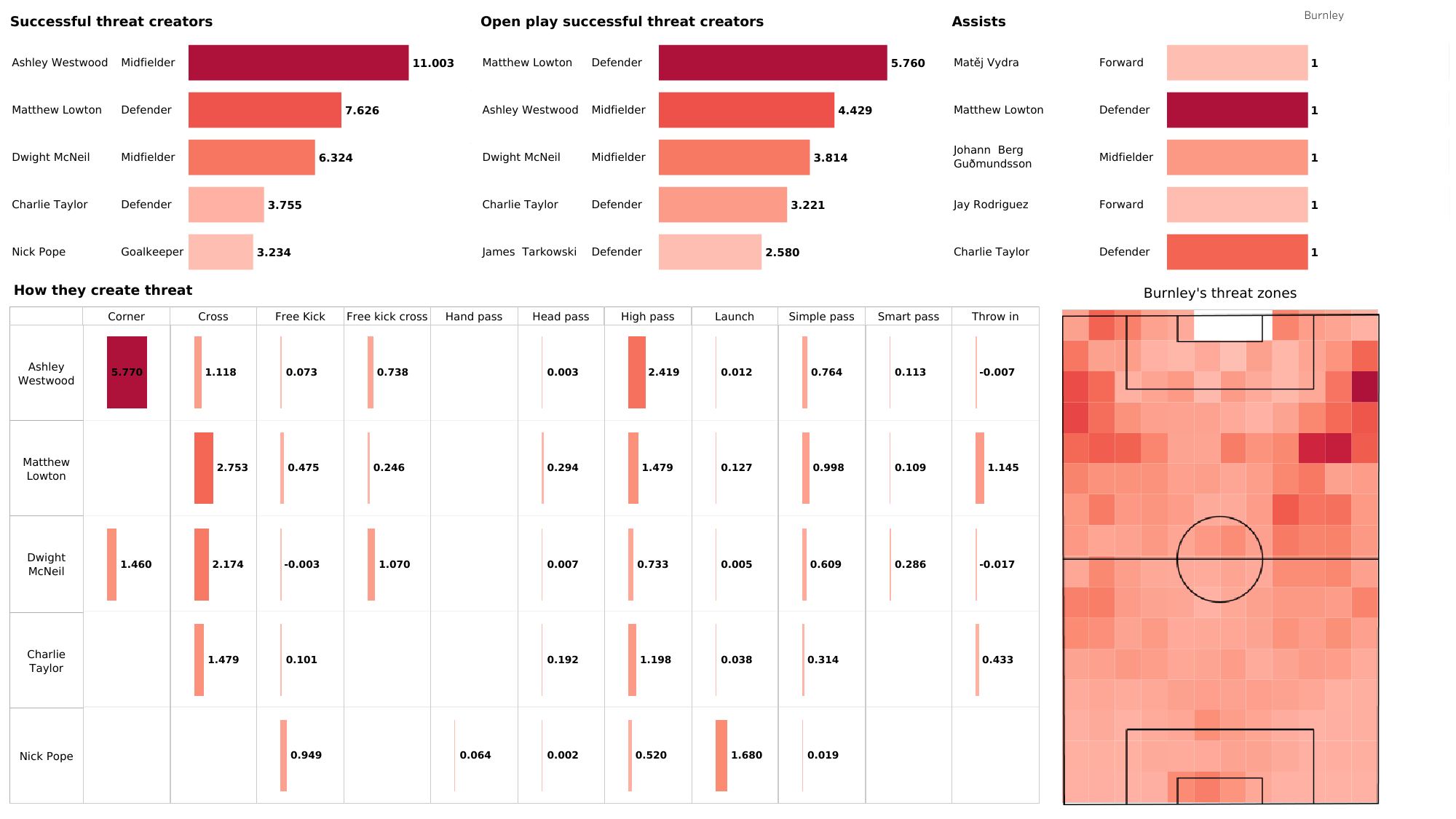 Tottenham Hotspur have the chance to surpass Arsenal (at least temporarily) on Sunday with a win against Burnley. The Clarets, on the other hand, will look to take every single possible point from their remaining three games, including this one, to hope for survival in the Premier League.