It was revealed a week ago that Argentine international Paulo Dybala has declined to renew his contract with Juventus and will be leaving the club as a free agent at the end of the season. The 28-year-old’s contract situation has drawn out for months following disagreements over terms. Dybala is now free to hold talks with many potential suitors, with several top European clubs interested in securing his services. With a goal contribution of 19 in 29 appearances across all competitions, the forward has once again recaptured his form after an injury-hit last season.

Tottenham, who were linked heavily with a move for Dybala in 2019, are reportedly among the host of clubs interested in the Argentine’s signature. The North London club, however, will reportedly face stiff competition for Dybala from Atletico Madrid, Inter Milan, and Barcelona, among others. Spurs, who are likely to continue re-building their squad in the mould of Antonio Conte, could benefit from signing Dybala. However, there have been doubts about whether the 28-year-old could fit the Italian manager’s rigorous patterns of play. With Dybala becoming increasingly prone to injuries in the recent seasons, Spurs should consider whether or not the Argentine forward could keep up with the demands of the Premier League.

Despite all the doubts, Dybala remains a highly creative forward, capable of changing the game with his few touches and close control of the ball. Spurs, who have become heavily reliant on the link-up play of Harry Kane and Hyeung min-Son to produce the goods for them, could gain a new dimension by adding a player of Dybala’s creative caliber.

Let’s take a look at some stats to gauge how ‘La Joya’ could add some creativity to Conte’s frontline. 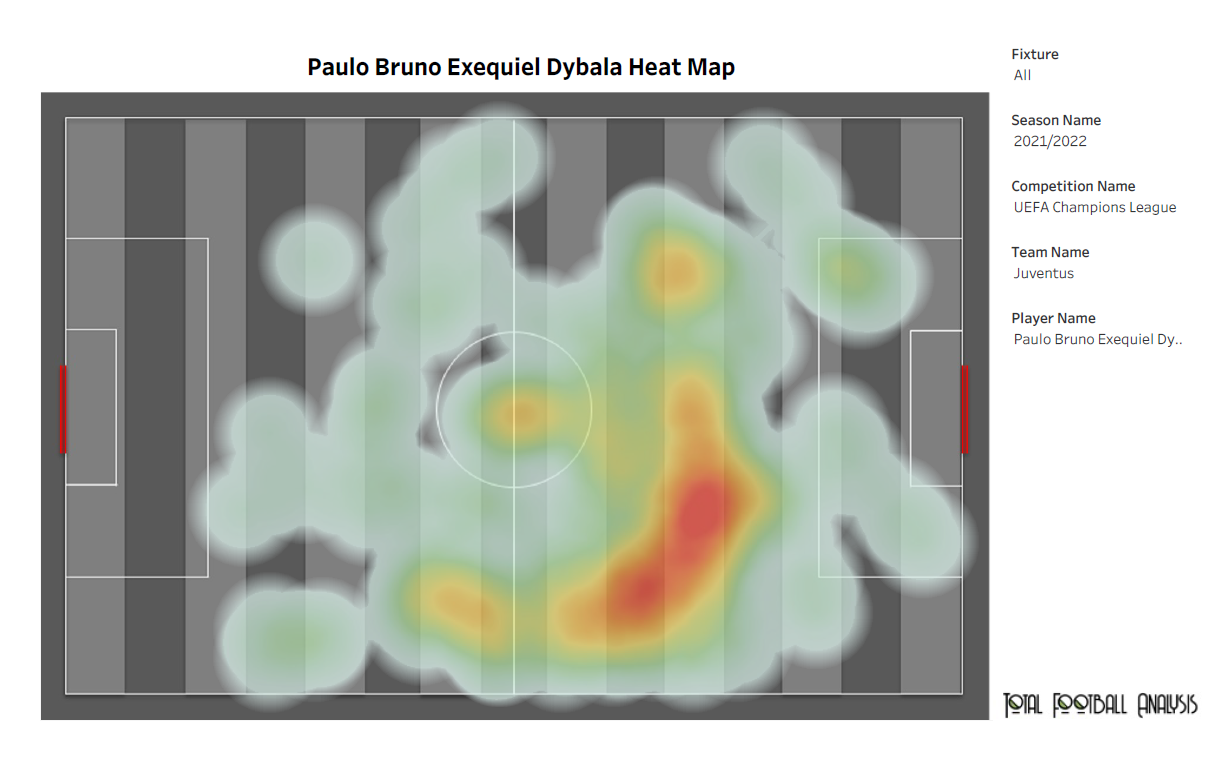 In the above viz, we can see Dybala’s area of activity on the pitch. This season Dybala has been deployed as a second striker, centre-forward, right-winger, and attacking midfielder, indicating his versatility to operate in multiple positions in the attacking line. The 28-year-old excels at dribbling and linking up with his teammates in tight spaces in the opponent’s half. Dybala is effective between the lines, as well as in the spaces near the central lanes. His close control and movement in congested spaces are impressive. We can see his movement near the half-spaces and in front of the opposition goal in the above viz. 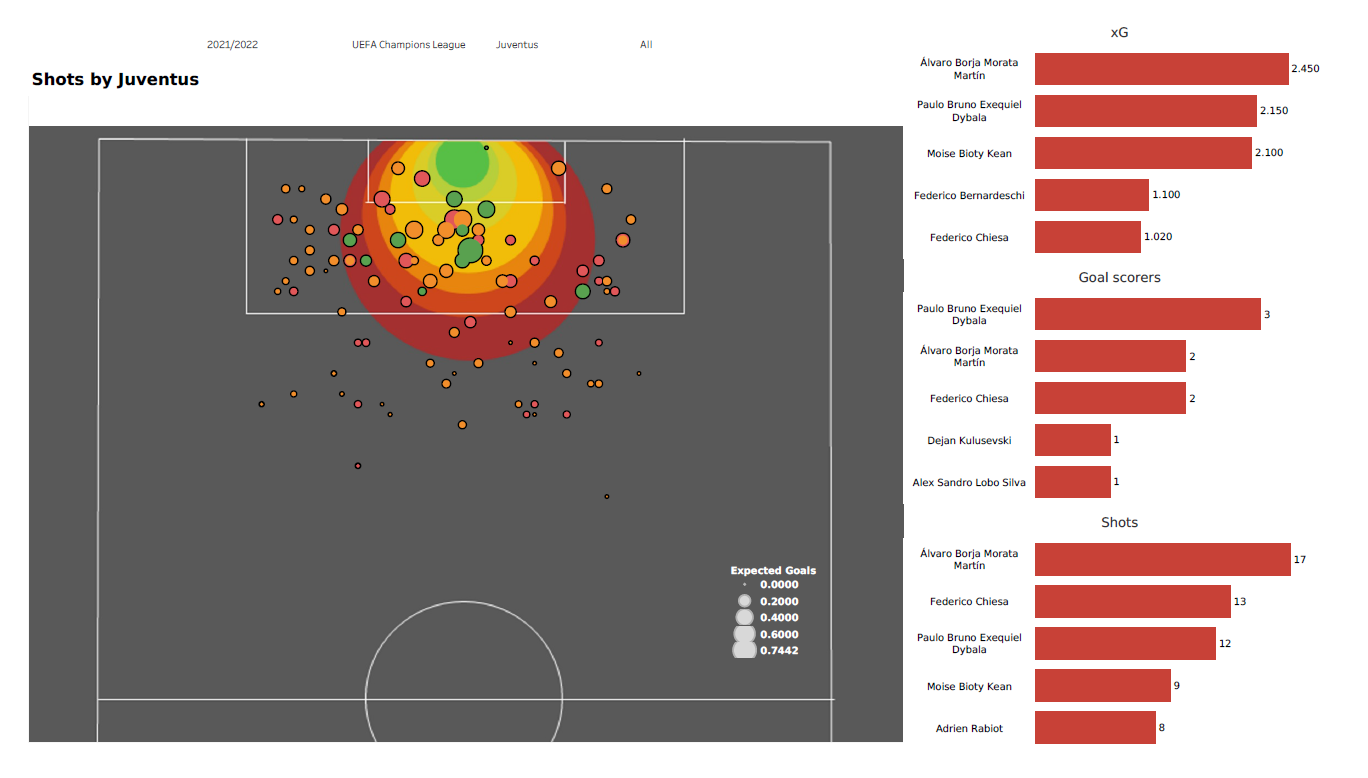 The above viz displays the location of shots taken by Juventus in the Champions League this season. Dybala has taken the third-highest number of shots in his team and leads the charts in terms of goals scored. His xG of 2.15 is the second-highest among Juve’s forwards, indicating that he has been on the end of multiple quality goal-scoring chances. The Argentine is an impressive striker of the ball with his favored left foot. When dribbling away from his markers, Dybala utilizes his agility and balance to create shooting opportunities. 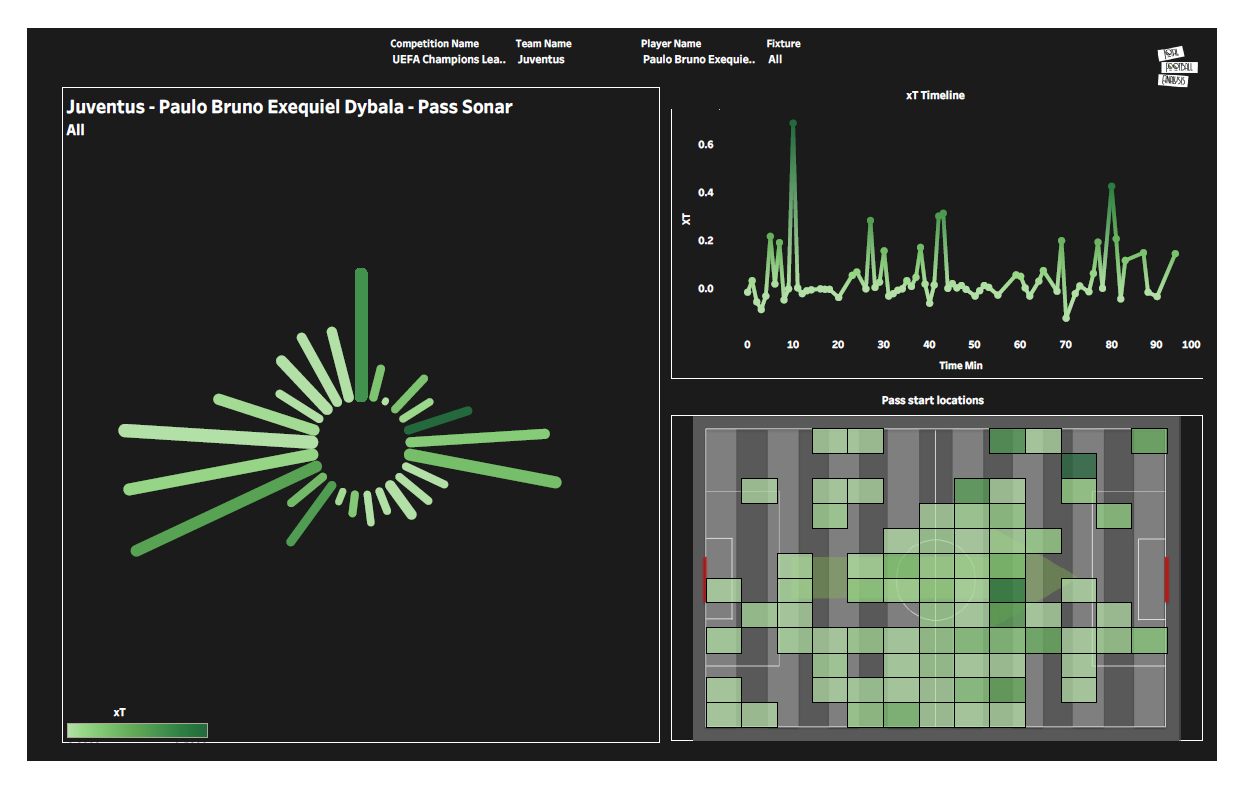 Dybala has been one of the best creators in Juventus’ lineup since joining the club. He can create impressively near the centre of the pitch or towards the right. His diagonal dribbles drag the defenders out of position, moving through spaces near the opposing team’s left-back. The 28-year-old is adept at creating for his teammates behind the defensive lines and can pick out the forward alongside him through his lateral passes. The above viz displays Dybala’s directionality of passes. We can see that he can create threatening plays in multiple areas of the opponent’s half.

While the doubts regarding his potential adaptability to the demands of the Premier League are somewhat valid, nevertheless, Dybala has proven himself to be an effective creative outlet, who is capable of impacting the game with his close control, vision, and dribbling. He is capable of providing additional creative depth to Antonio Conte’s squad.