According to reports, Spurs are interested in signing the Dutch forward Memphis Depay from Barcelona. The upcoming transfer window would see the Lilywhites continue to rebuild under Antonio Conte, and it has been reported that Depay is one of the players on Tottenham’s wishlist. The 28-year-old, who arrived at Camp Nou last summer from Lyon, has struggled to find a place in Barcelona’s starting XI since the turn of the year. Although injuries have contributed to his limited appearances in the past two months, Depay could struggle to feature regularly now that Barcelona have added Ferran Torres, Pierre-Emerick Aubameyang, and Adama Traore to their ranks.

The former Manchester United man has made 29 appearances for the Catalan giants this season, scoring 10 goals and laying two assists. Despite his fewer appearances in recent weeks, the 28-year-old has been performing well for Barcelona and is currently the highest scorer for his side. Following an underwhelming spell at Old Trafford, Depay moved to Lyon, where he once again displayed his impressive attacking play. The Dutchman continued his excellent form in LaLiga and was a regular source of goals during the first half of the season.

Spurs are reportedly among a host of Premier League clubs who are targeting the 28-year-old. Despite adding Dejan Kulusevski to their squad in the January transfer window, Tottenham lack depth in their attacking areas, and Depay could provide Conte with the quality that he seeks as he looks to re-shape his squad.

Let’s take a look at some stats to gauge Depay’s performances and his strengths. 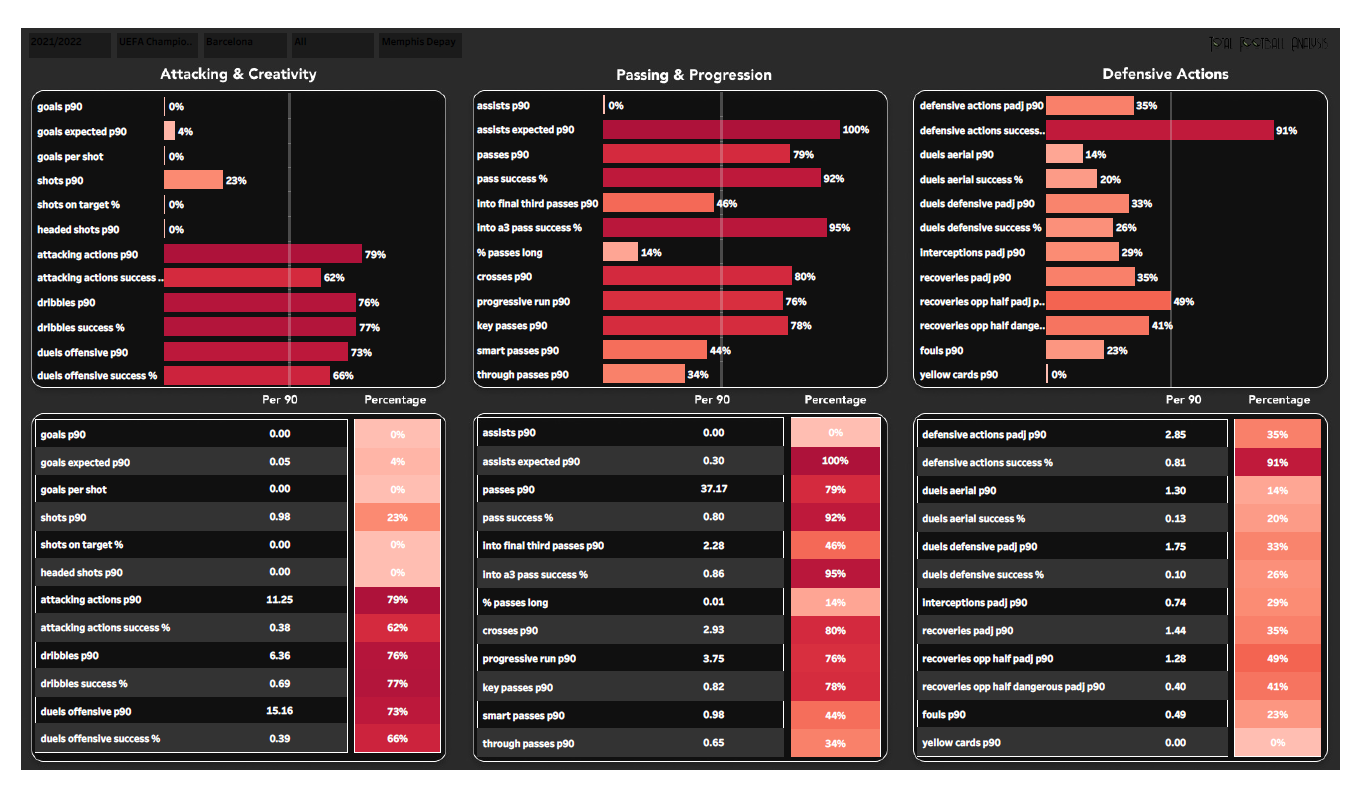 In the above viz, we can see Depay’s overall stats in the Champions League. His most notable attacking & creativity stats are attacking actions per 90, dribbles per 90, dribbles success rate, and offensive duels per 90. Depay has also been impressive in terms of his passing & progression stats. He has ranked highly in terms of xA per 90, pass success rate, attacking third pass success rate, and crosses per 90. The 28-year-old displays excellent balance and remains strong under challenges. He demonstrates excellent dribbling technique and pace, which makes it harder for the opposition defenders to mark him. Depay’s clever runs behind the defensive line make him a threat near the opposition box. 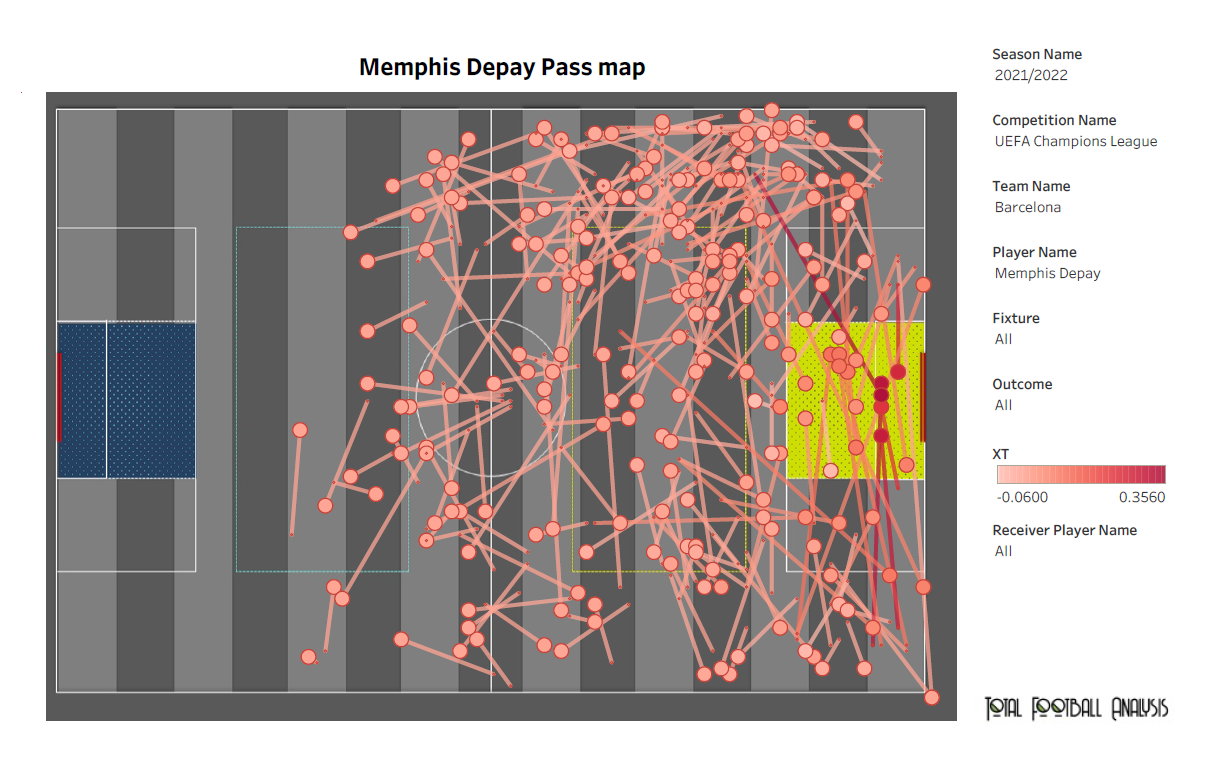 The above viz displays the wide range of passes that Depay has delivered. In addition to being a goal threat, the 28-year-old is adept at creating chances for his teammates. We can see in the above viz his multiple passes and crosses inside the opposition box from both flanks, and some of those deliveries carry a high expected threat. Another one of Depay’s strengths’ is his hold-up play. While darting towards the defenders, he will drive them towards their weaker foot to make it difficult for them to keep up. Depay’s quickness and explosive pace make him a great outlet during counterattacks. 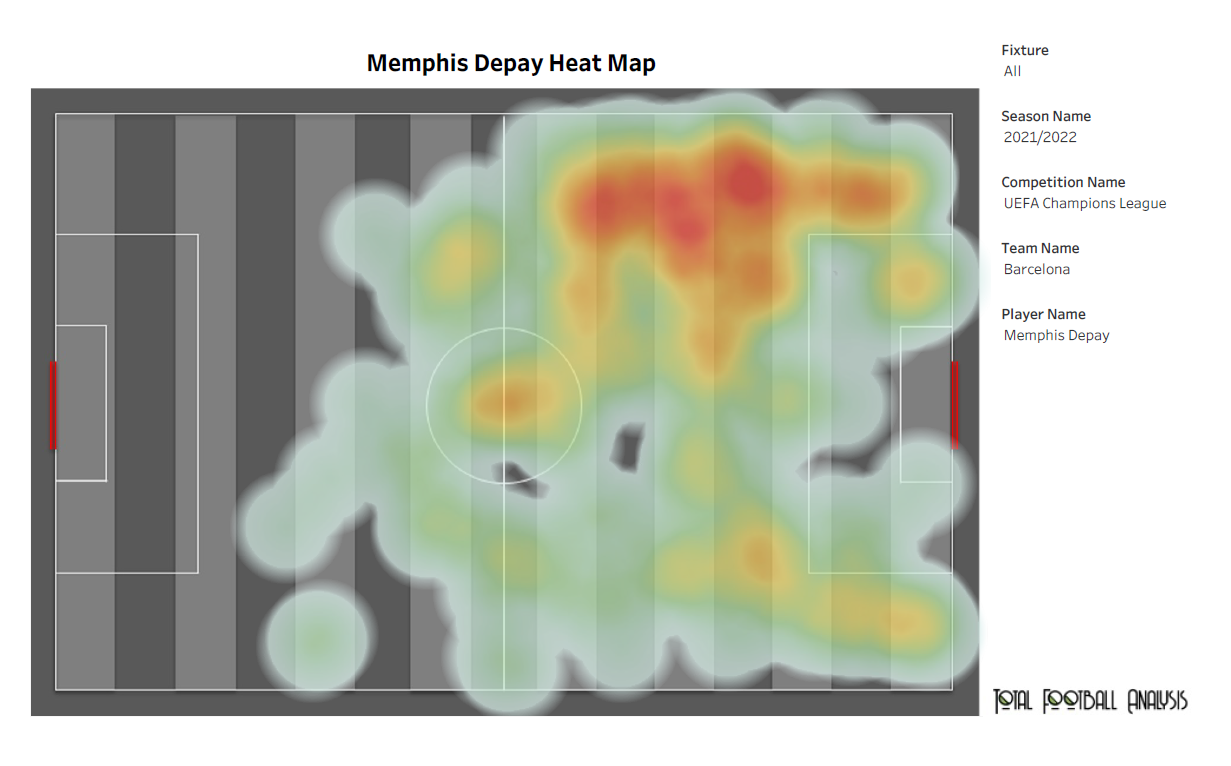 The 28-year-old is versatile enough to slot in at multiple positions. He can operate both as a creator and as a finisher. At Barcelona, Depay has been deployed as a centre-forward or as a left-winger. We can see Depay’s activity on the pitch in the above viz. He has been thoroughly active in the half-spaces on the left wing. While playing as a left-winger, the Dutchman tends to cut in and take a shot at the goal. He sometimes tends to drop near the centre and in his half. Depay is capable of bringing other attacking players into the team’s play by drifting towards the left or occupying space in between the lines with his impressive movements. He makes a lot of decoy runs off the ball and tends to be always on the move, dragging defenders out of their position in the process.

Depay could be an impressive addition to Antonio Conte’s squad. His versatility would allow Conte to use him in multiple attacking roles, either as a winger or as a striker.