Tottenham’s start to the new year has been a mixed bag. Although they did manage to move to the fourth round of the FA Cup, they were knocked out of the EFL Cup by their London rivals, Chelsea, over the course of two legs. Their dramatic 3-2 stoppage-time victory over Leicester City was spoiled by another defeat at the hands of Chelsea, this time in the Premier League. Three defeats in the London derby and Spurs’ failure to score a single goal in those defeats highlight that Conte’s team is still lacking a creative spark. Despite the defeats, Tottenham have looked like a much-improved side since Conte’s arrival, as they remained undefeated in their previous nine fixtures in the league before the 0-2 defeat against Chelsea.

Conte has indicated in multiple interviews that his squad needs reinforcements. So far, Tottenham have not announced any signings, although they have been heavily linked with multiple players. Many reports have claimed that Conte is dissatisfied with the performances of his wing-backs and wants another option in that department.

Since his move to Tottenham, Matt Doherty has been on the fringes of the squad. The Irish right-back has failed to become a regular starter for Spurs since his move last season. He made only 17 appearances last season in the Premier League and has found it difficult to nail his spot in the first-team in the current season as well. In Tottenham’s semi-final defeat in the EFL Cup, Doherty was picked for the left wing-back role following an injury to Sergio Reguilon. He endured a difficult time in both of those games, failing to impress with his work with or without the ball.

Despite his unimpressive performances in both legs of the semi-final, Conte decided to start Doherty in the 0-2 defeat against Chelsea in the Premier League, albeit on his preferred right side this time. The 30-year-old produced an impressive performance, although his side fell to a defeat. Before that, Doherty was also instrumental in Tottenham’s stoppage-time win against Leicester, as he provided an assist for Bergwijn’s goal. With Doherty being linked with a move back to Wolves and Adama Traore linked with a move to Spurs, it remains to be seen if Doherty will continue as a Spurs player past January.

Let’s take a look at his stats to gauge whether Spurs should keep hold of Doherty.

In the above viz., we can see that the majority of Doherty’s stats have been below the league median value. Although it can be argued that Doherty has not been afforded many appearances this season, his performances last season were not up to the mark as well. His most notable stat this season is the loose ball duels success rate. In the recent defeat against Chelsea, while Doherty produced an improved performance when compared to his previous appearances, his creativity still left a lot to be desired, and he failed to supply his side with an attacking threat in the opponent half.

In the above viz., we can see the areas of the pitch where Doherty has delivered his passes. Since Conte’s arrival, Tottenham’s creativity from the wing-back areas has been criticized, with the players available seemingly providing very little threat from their crosses. Although Doherty is defensively solid, his attacking contribution and explosiveness are lacking. With Conte’s back-three system putting a high emphasis on the creativity of wing-backs, it can be argued that Doherty is perhaps not the best solution for this role.

The above ‘heat map’ highlights the areas of the pitch where Doherty has been active. We can see from his heat map that Doherty has featured both on the left and right sides of the pitch. Despite his limited opportunities, Doherty’s work rate has been decent. 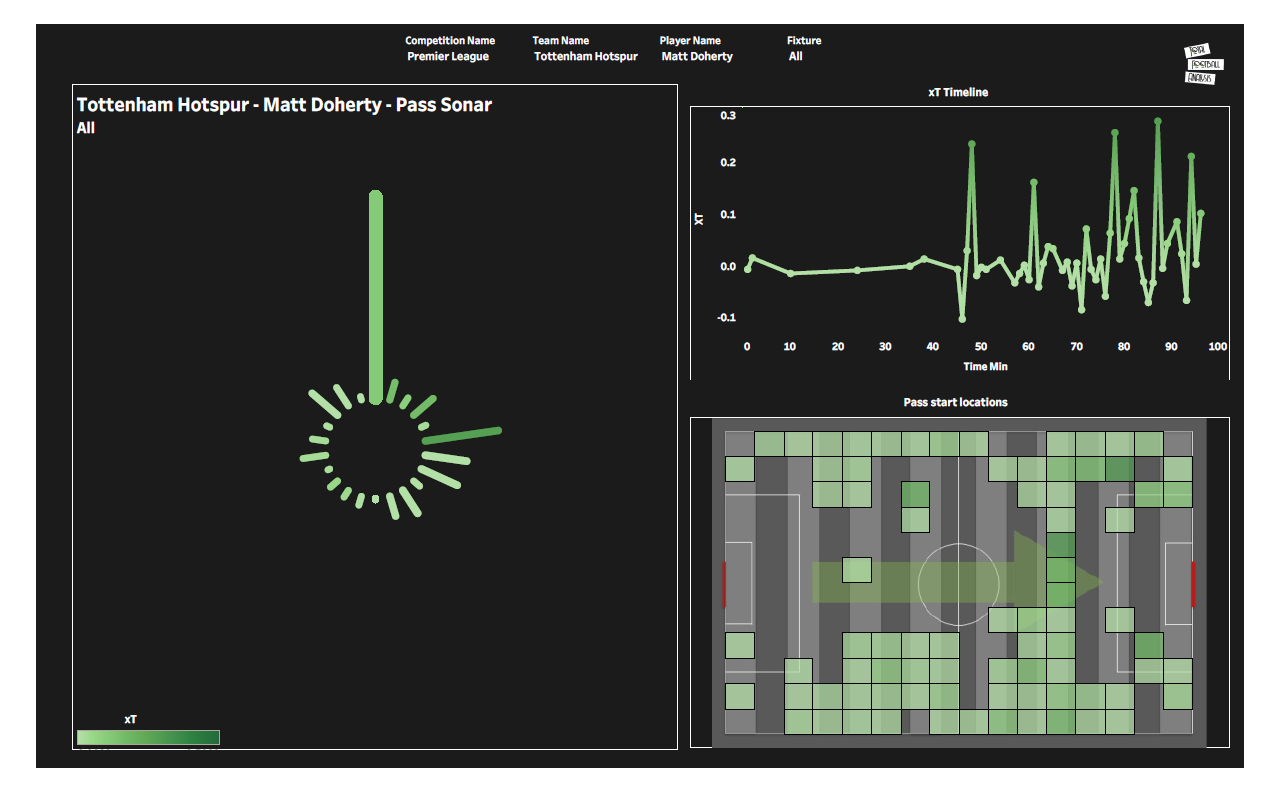 In the above viz., we can get a sense of Doherty’s direction of passes and the threat carried by those passes. In his pass start location, we can see that his passes and crosses near the opposition box have carried a low expected threat.

It has been apparent from Tottenham’s performances under Conte have lacked creativity from the wing areas. Although there hasn’t been a massive decline in Doherty’s performances, barring his appearances in the EFL Cup semi-final, it is clear that Tottenham are lacking a player who can create and attack from the right wing-back. A move away could benefit both Doherty and Tottenham.