Although they are yet to make any signings, Tottenham have been linked with many players since the transfer window has opened. Recent reports have claimed that the Lilywhites are interested in signing Porto winger Luis Diaz. They have already had a bid rejected, according to multiple sources, but Spurs remain interested in bringing the winger to North London. Liverpool are another Premier League club that have also been linked with a move for Diaz.

The 25-year-old Columbian has been in impressive form for Porto, scoring 14 goals and registering four assists for the four assists in 18 league appearances. The winger also featured in all six of his side’s Champions League group stage fixtures, scoring twice, although Porto failed to secure their spot for the knockouts.

With other clubs also in the pursuit of the winger, Tottenham would need to act fast if they are to strike a deal for Diaz. Conte has already addressed the need for improving the quality of his squad and given his side’s lack of creativity from the wide areas, Diaz could be an excellent addition. Diaz, who joined Porto from Colombian team Club Junior in the summer of 2019, has been instrumental for his side and has helped them secure the domestic title and cup. Diaz was also impressive for Columbia in last year’s Copa America, where he finished as the tournament’s joint highest-scorer with four goals.

Let’s take a look at his stats from the Champions League to gauge whether he could become the creative savior that Conte seeks in the wide areas. 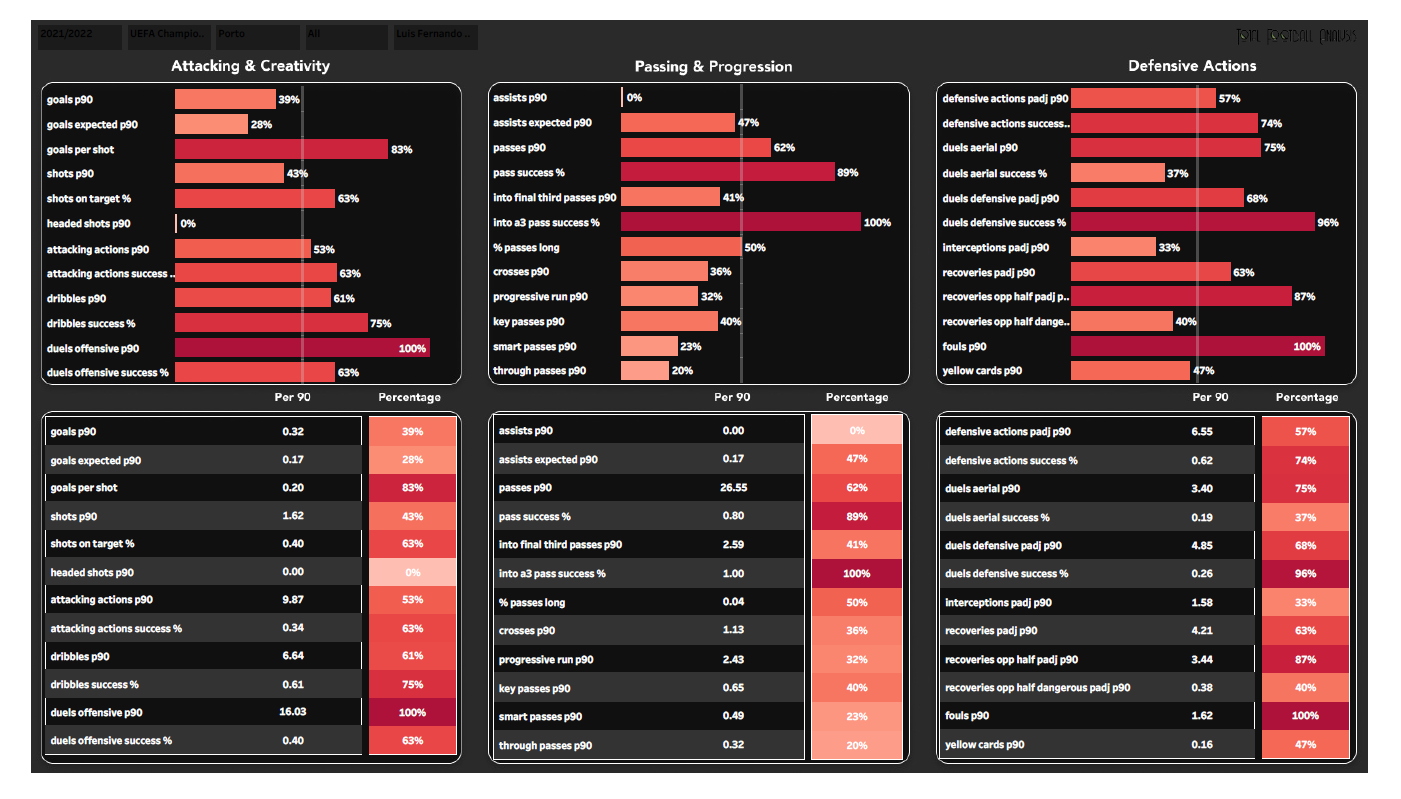 In the above viz., we can see Diaz’s attacking & creativity, passing & progression, and defensive stats. Most of his attacking & creativity stats are above the league median value, with the most notable stats being goals per shot, dribble success rate, and offensive duels per 90. The winger has an impressive pass completion rate of 89%, although many of his other passing & progression stats have been below average. Diaz’s defensive contribution is also noteworthy as he ranks highly in terms of some of the metrics such as defensive duel success rate and average recoveries in the opponent’s half. Diaz displays impressive dribbling ability and has brilliant ball control. He effectively utilizes his speed and technique to beat the opposition defender in a one-on-one situation. 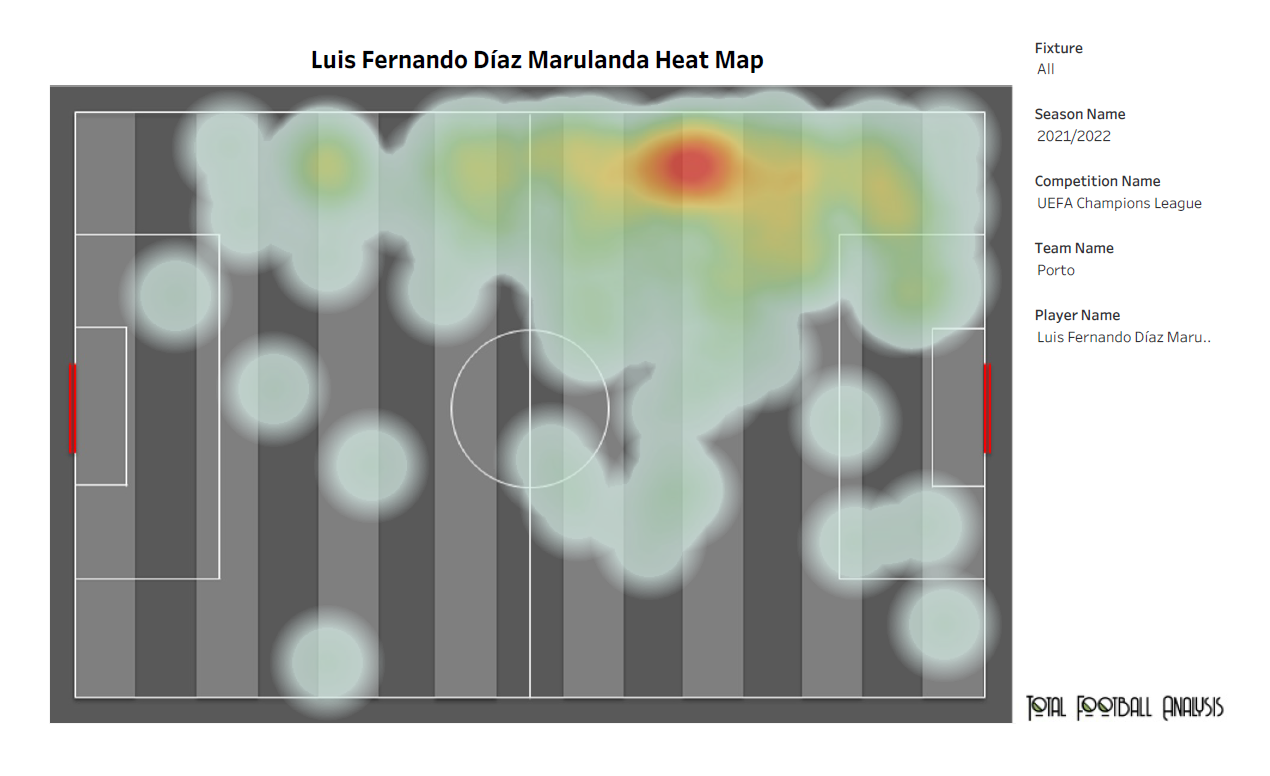 Diaz’s heat map displays the locations on the pitch where he is most active. For Porto, Diaz is mostly deployed on the left wing, although he is a right-footed player. The red zones in the heat map highlight that area on the left wing where he is active the most. Diaz has a role of an inverted winger for his side, where he plays on the side of his weaker foot either drifting inside or staying out wide to provide his team with attacking options. We can also see that he has popped up in other areas of the pitch as well. He usually cuts inside, utilizing his dominant right foot, and can pick out spaces to shoot himself or find a teammate. 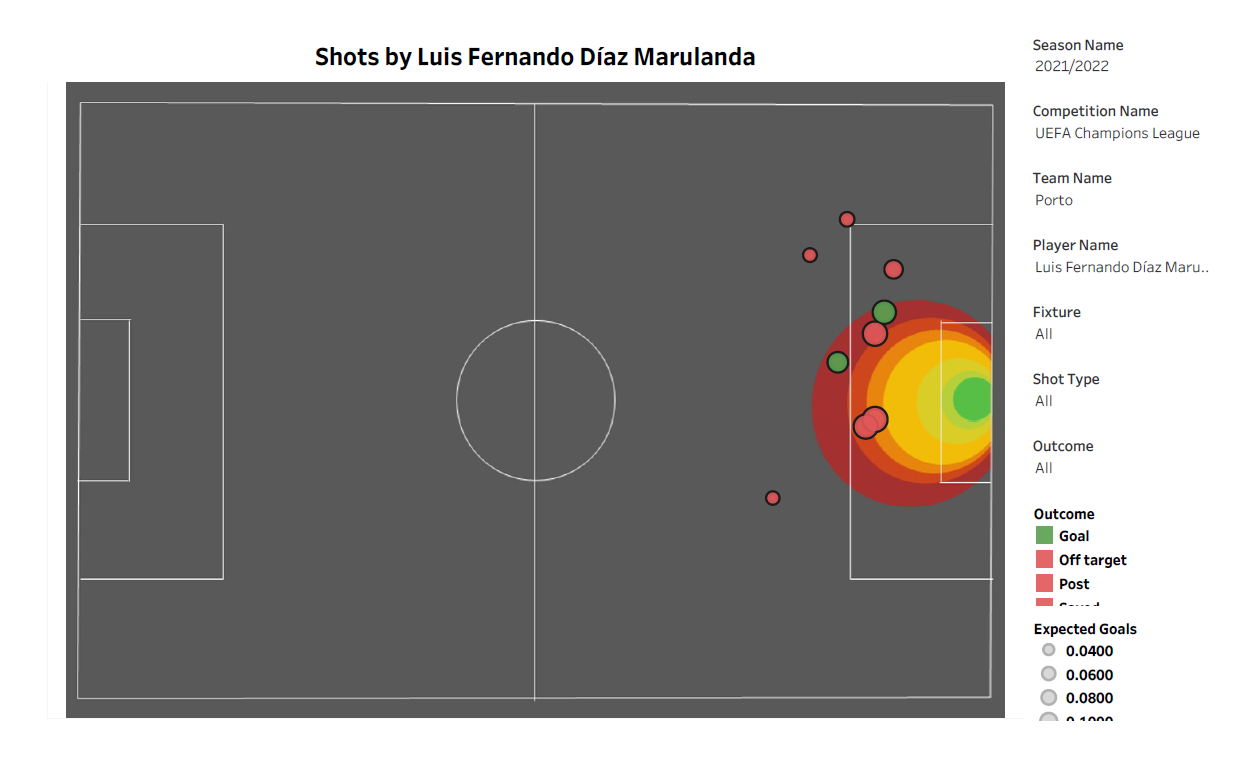 In the above viz., we can see the location on the pitch where Diaz has taken his shots from. It’s evident from his shot map that Diaz has taken most of his shots from inside the box. Conte could rotate Diaz with Son on the left-side of his 3-4-2-1/3-4-3 formation. In addition to his creativity, Diaz is also a goal threat, similar to Son.

Tottenham need a creative signing if they are to challenge for the top-four spot. They have faced issues in creating from the wide areas, and Diaz could solve Conte’s problems.