The mood around the Tottenham Hotspur Arena has improved relatively in the recent few days. Although they reportedly missed out on a few of their transfer targets, Spurs have managed to bolster their squad with two new additions. The signings of Rodrigo Bentancur and Dejan Kulusevski from Juventus would provide Conte with the depth in the midfield and attack respectively. In addition, it has been reported that the South Korean winger, Heung-Min Son, is back in training and is likely to be in contention for Tottenham’s upcoming FA Cup match against Brighton.

Amidst Tottenham’s struggles since the start of the season, Son has been one of the standout performers in the squad. The winger has made 17 appearances in the Premier League, scoring eight times and registering three assists. Before his injury in the second leg of the EFL Cup against Chelsea, Son had featured in all of Spurs’ league matches under Conte.

Conte would be looking to count on the winger as Tottenham are set to have a busy few weeks after the international break. The Italian manager has labeled Son as a top player, and he believes that the forward’s ambition would be a vital asset for Spurs. Son has been Spurs’ most prolific player and has established himself as one of the Premier League’s top forwards since he arrived in English football in 2015. He has been a prominent feature in the Lilywhites’ forward line, scoring 78 goals in 214 league appearances.

Let’s take a look at his stats to gauge whether Son can fire Tottenham back into the top four of the league after his return from injury. 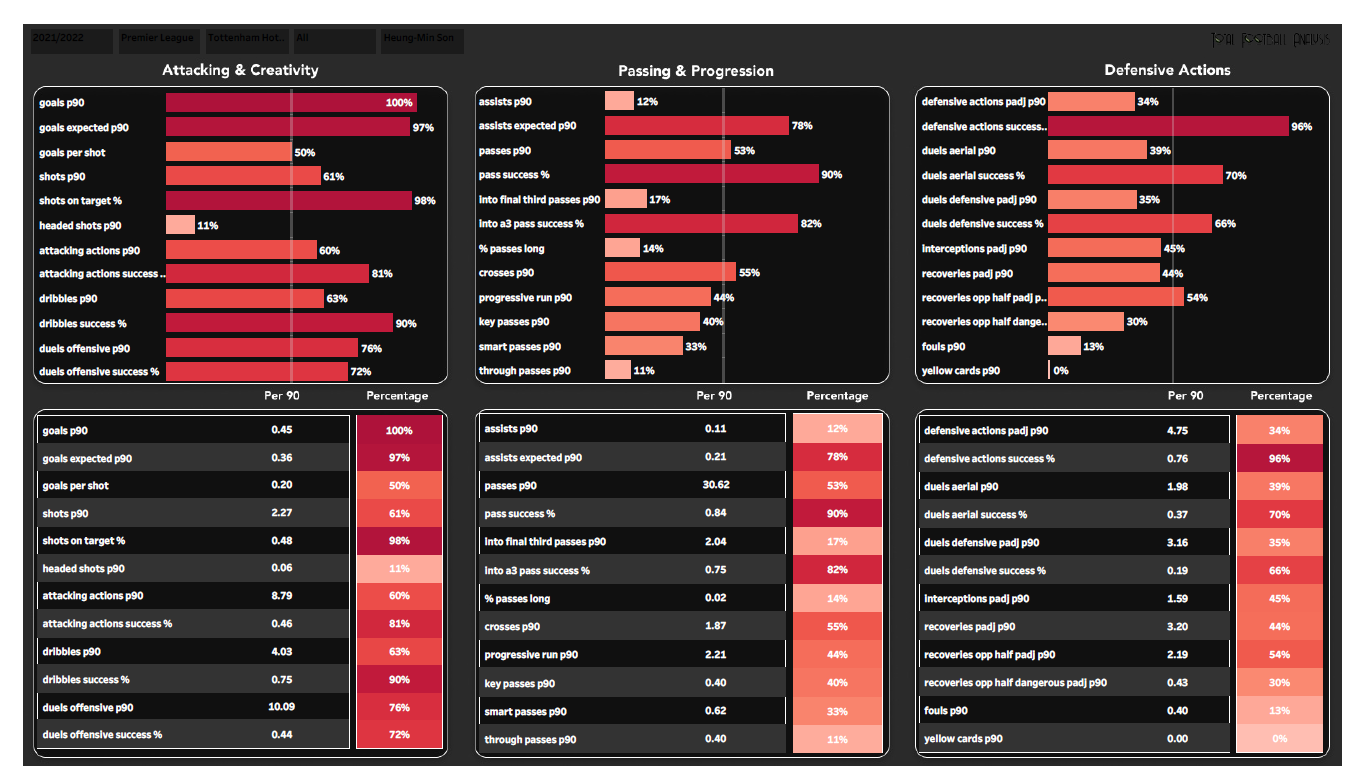 The above viz. provides an overview of Son’s attacking & creativity, passing & progression, and defensive stats. We can see that he ranks above the league median in most of the attacking & creativity metrics, with his most notable stats being xG per 90, shot accuracy, successful attacking actions, and successful dribbles. Son has an impressive passing accuracy rate of 90%, and his expected assists per 90 is remarkable as well. Son’s overall output in the attacking third is what makes him stand out among his peers. The South Korean international excels at dribbling, and his explosive runs in the opponent’s half are often a cause for concern for the defenders. He is adept at shaking off his marker and can get into the threatening areas of the pitch. 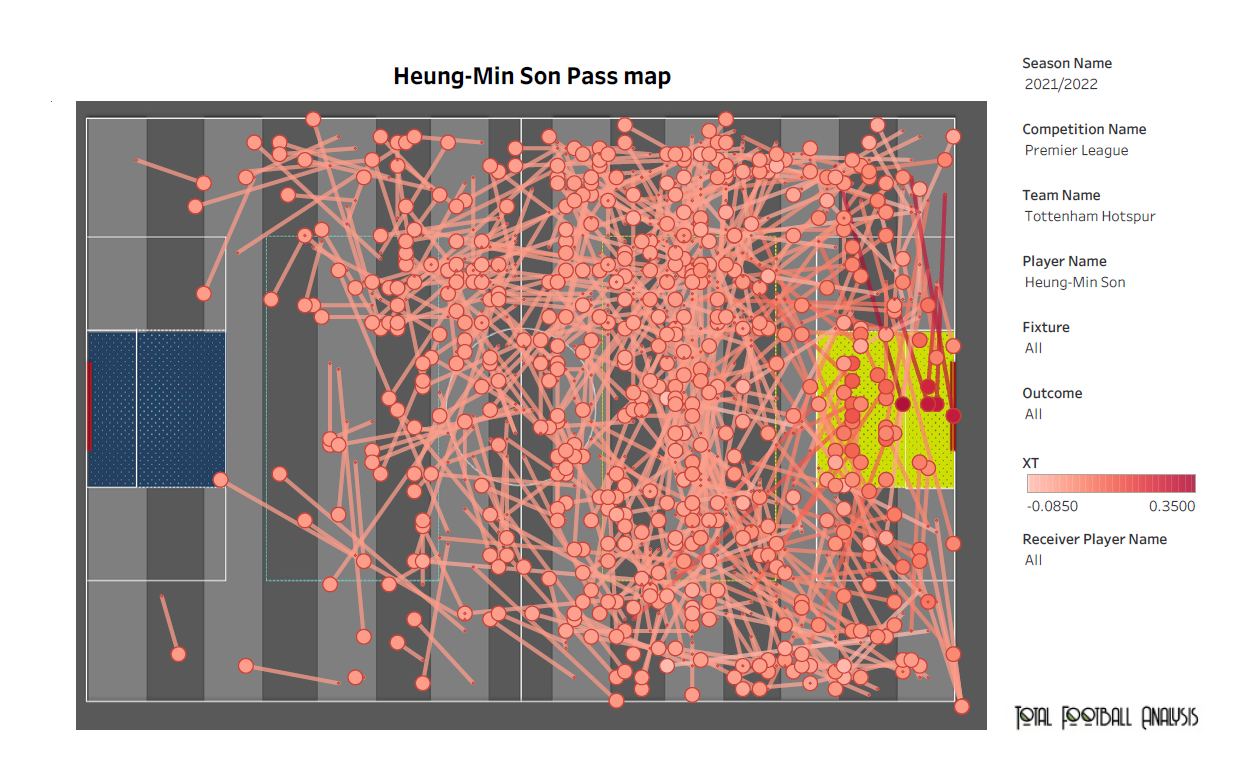 In the above viz., we can see the wide array of passes that the forward has delivered. Many of his passes from the left wing into the opposition box carry a high expected threat. We can also gauge his mobility on the pitch, as he has delivered passes into the box from multiple positions in the opponent’s half. 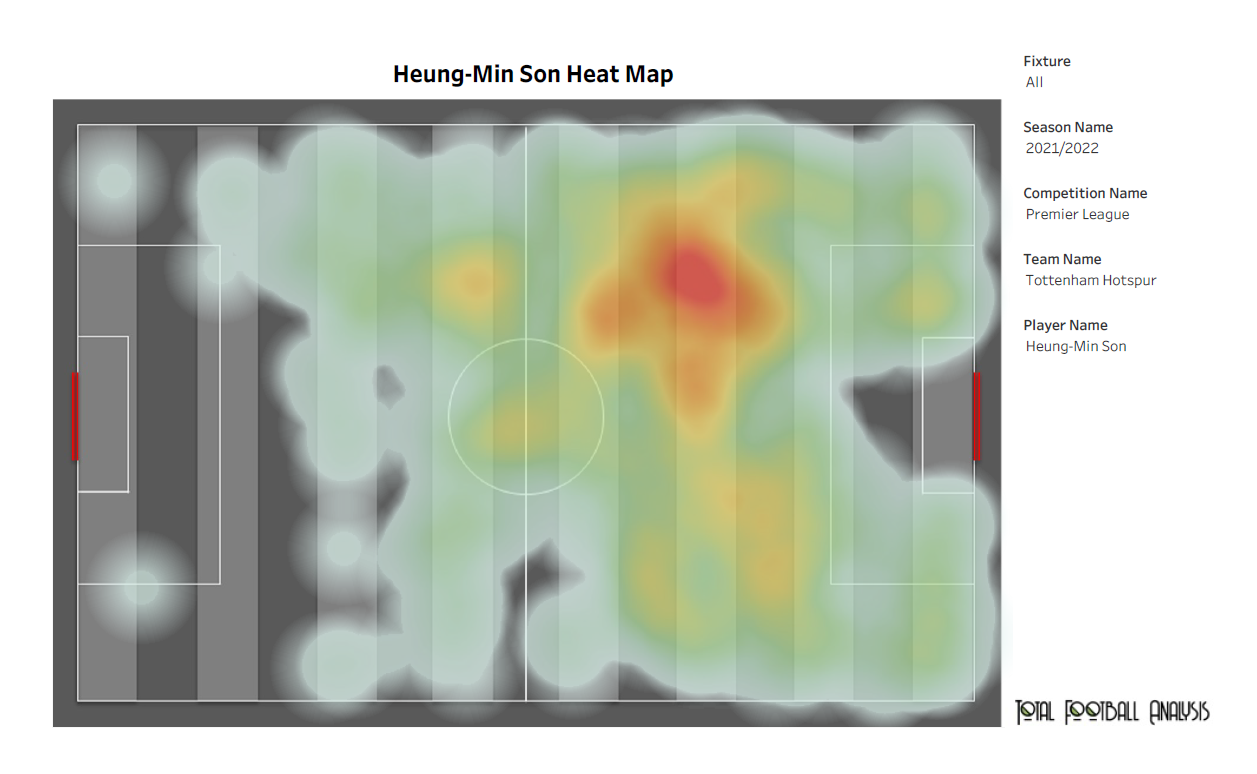 His heat map highlights the areas of the pitch where he is most active. We can see that he has engaged heavily in the half-spaces on the left wing while he has also been flexible enough to make the switch on the right. Under Conte, Son has been deployed as a winger on the left side in the Italian manager’s 3-4-3/3-4-2-1 formation. Son is tactically versatile and can also be deployed as a second striker. His ability to cut inside from the left makes him a threat in the opposition’s half. 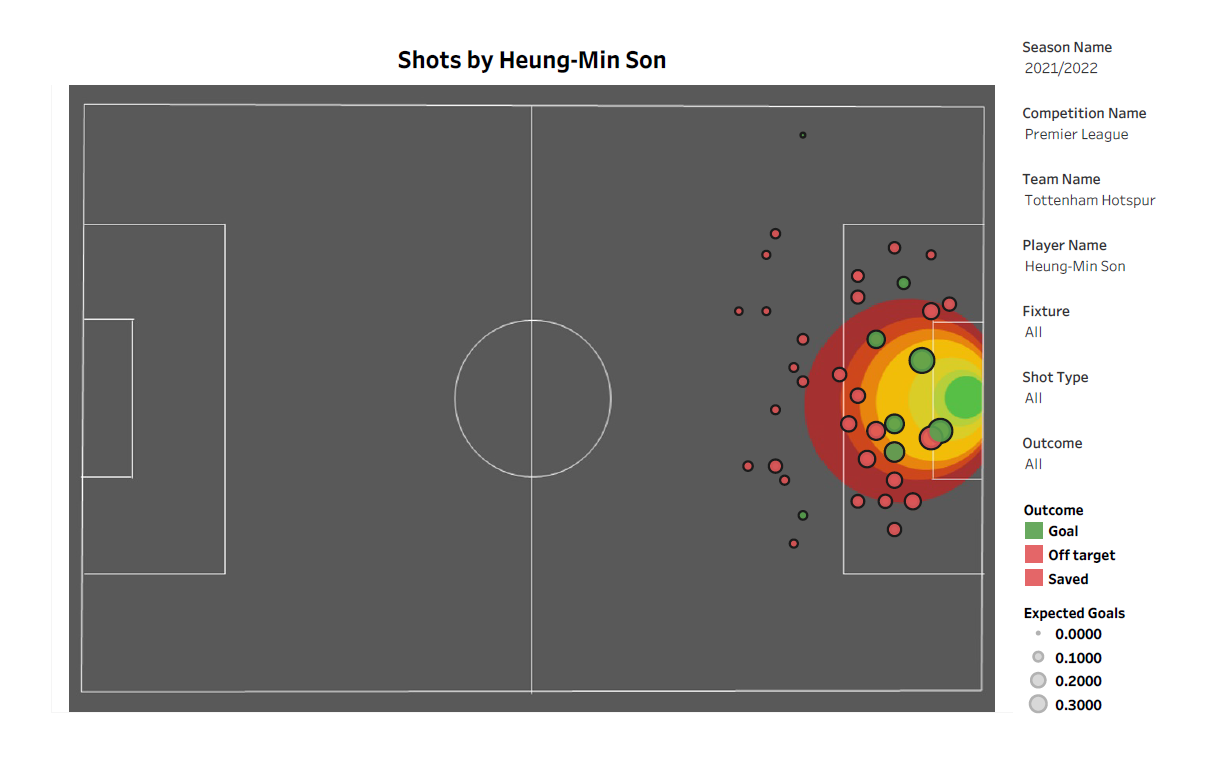 Son is a clinical forward who possesses an impressive eye for the goal. He positions himself brilliantly in the attacking third and can exploit the spaces between the defenders. In the above viz., we can see the locations of his shots near the opposition box. The majority of his goals have been scored inside the box, while he has taken plenty of shots from outside the box as well.

There is no doubt that Son’s return will provide a boost to Conte’s squad. Spurs have managed to do decent business during the January transfer window and have added some level of depth. Son can aid his side in getting back in contention for the top four.