Since taking over as the Spurs manager, Antonio Conte has seen his side climb back up to the sixth spot in the Premier League. With two games in hand, Tottenham are now two points adrift of the fourth place and look to be in genuine contention for the Champions League spot. Their recent form has seen them take 17 points from the last seven fixtures with 10 wins, three draws, and five losses in 18 games. While they have hit a few roadblocks along the way largely caused by the COVID outbreak, the stoppage-time winner in their recent match against Watford at Vicarage Road was a reminder of how far Spurs have come since the start of November.

Conte’s approach has transformed many players and allowed them a second wind as they look to overturn their fortunes after the change in management. Players such as Lucas Moura, Ben Davies, and Eric Dier look rejuvenated, while Heung min Son, Oliver Skipp and Pierre-Emile Hojbjerg have improved even further. Another player who has benefitted under Conte’s tenure is the English midfielder, Harry Winks.

After being phased out under previous management, Winks, in the recent games, has displayed his tenacity and gained his manager’s trust. In a recent press conference, Conte praised Winks stating that the midfielder has been playing well and can be counted upon. Since he arrived at Tottenham, the Italian manager has had the time to evaluate the squad, and his recent comments further highlight the faith that Winks has gained from his manager. The midfielder has made five appearances since Conte took over, and his performances indicate that he might be handed a regular role in Spurs midfield.

Let’s dive into his stats to gauge if the English midfielder can provide the depth that his manager seeks in the midfield. 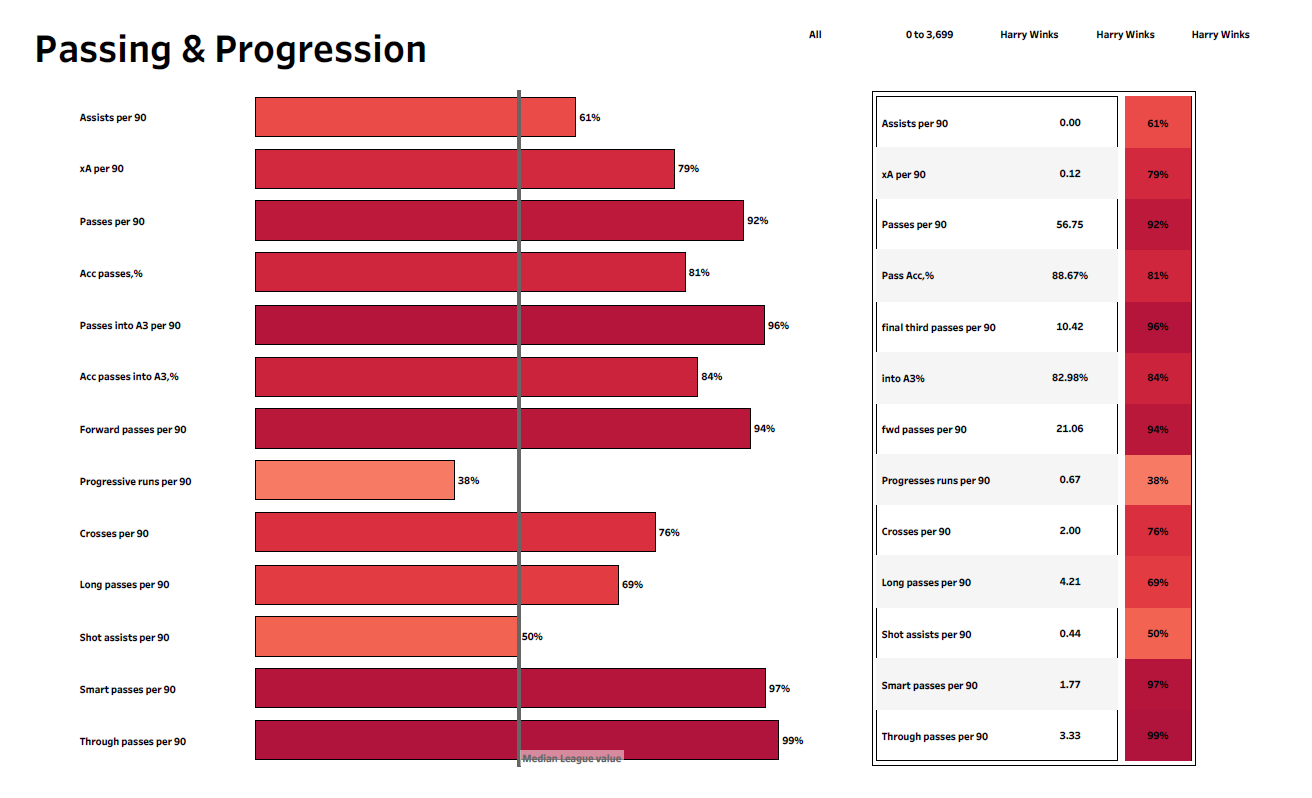 After waiting for game time during the initial few weeks of Conte’s tenure, where he started just one match, Winks was given his chance and started in Tottenham’s 2-2 draw against Liverpool. He was impressive for Spurs, and displayed his quality with his forward passing, and was one of the standout performers in the game. His accurate progressive passes to the attacking duo of Son and Kane proved instrumental for his side’s tactics. Winks is an adept passer of the ball and is comfortable in possession. Most of the passing and progression stats this season surpass the league median value, with his most notable stats being passes into the attacking third per 90, forward passes per 90 and smart passes per 90. 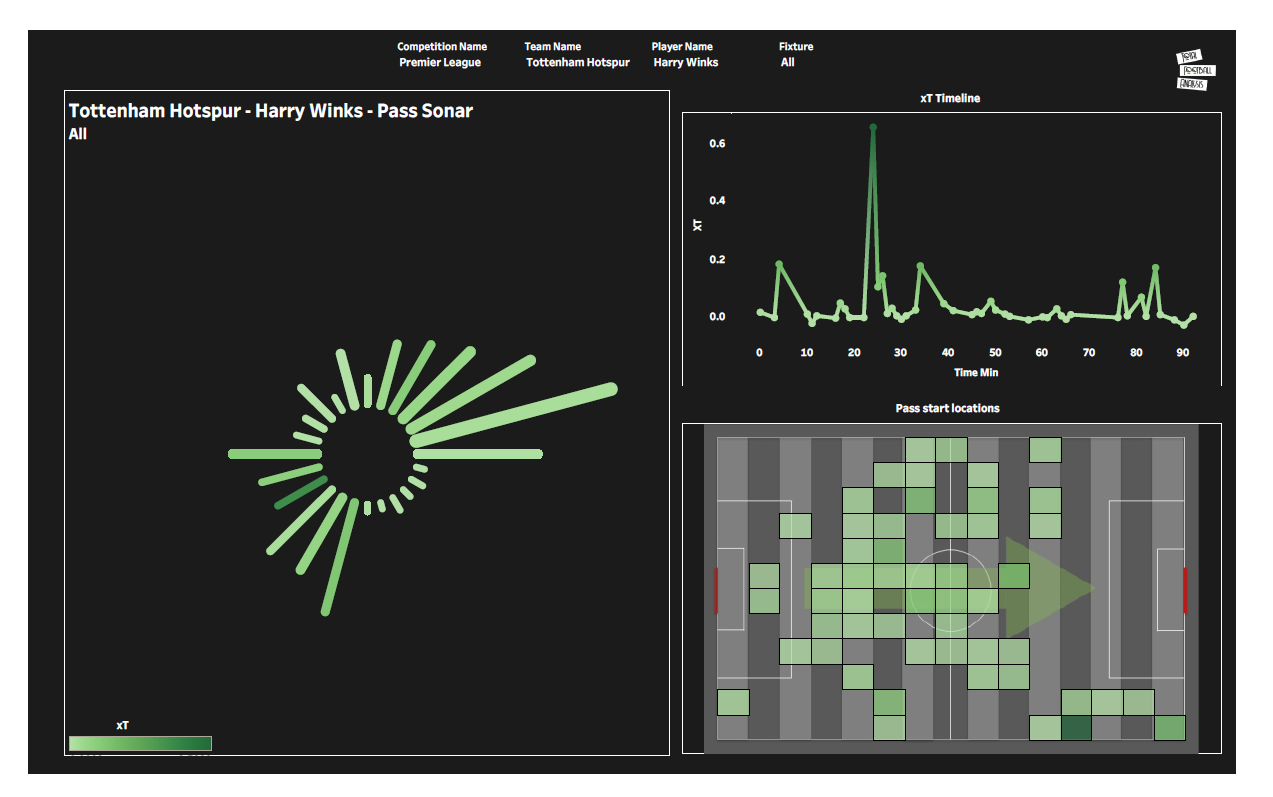 Pass Sonar outlines the direction of pass that a player or a team tends to make and indicates a player’s influence on the movement of the ball. In addition, it shows the frequency distribution of different passing angles for an individual player, as well as the typical length of pass attempts. Winks’ pass sonar highlights that he has attempted most of his passes towards the right wing in the opponent’s half or left wing in his half. Viewed in conjunction with his pass start location, we can gauge Winks’ passing tendency this season.

In addition to his passing ability, Winks often likes to drop deep in his half to link up with the defense and can pick out accurate passes to his forward teammates. The midfielder’s stature aids him in resisting the opponent’s press and retaining ball possession. In Conte’s 3-4-2-1 system, Winks has been deployed mostly as a part of the double pivot alongside Hojbjerg. While Hojbjerg edges out Winks in terms of energy, Winks possesses a better range of passing. His heat map displays the areas on the pitch where he is most active in.

Winks’ performances in the recent matches have provided Conte with another option for his midfield pivot. The English midfielder’s forward passing and creativity have pushed him higher up in the pecking order. Conte’s comments in the recent interviews have provided definite indications that the midfielder would be counted upon in the upcoming matches as Spurs look to move closer to the Champions League spot.

Leicester City vs Tottenham Hotspur Preview: xGA, match tempo and more – what do the stats say?

Transfer Talk: Could Adama Traore be a good fit in Conte’s wing-back system?

Transfer Talk: Could Adama Traore be a good fit in Conte’s...

Under the microscope: Diligent Davinson – Has the Columbian improved in...

Under the microscope: Worthy Winks – Can Harry Winks provide the...

We use cookies to ensure that we give you the best experience on our website. If you continue to use this site we will assume that you are happy with it.Ok