Since the opening of the January Transfer window, Tottenham have been unable to finalize a signing so far, despite reportedly being in talks with multiple players. One of the many players that Antonio Conte’s side have been linked up with is AC Milan midfielder Franck Kessie. There have been multiple reports suggesting that Tottenham could land the Ivory Coast international, however, some other reports indicate that the energetic midfielder could land elsewhere when his current deal with AC Milan expires this summer.

Kessie, who is reportedly admired by Conte and has been on Spurs‘ radar, has been on international duty, representing Ivory Coast in the African Cup of Nations, although his side have recently crashed out of the tournament in the Round of 16. The Ivorian’s contract situation has made him one of the most sought-after players in the transfer window, and many clubs have shown their interest in signing the player.

The 25-year-old midfielder has been with the Rossoneri since 2017 and it is looking unlikely that he would sign a new deal with the club. Kessie has made 16 appearances for AC Milan in Serie A while also featuring in five matches in the Champions League group stages. With Lo Celso, Ndombele and Alli reportedly on their way out of Spurs, Kessie could become an impressive signing in the midfield for Spurs as he is adept at playing in a box-to-box role or as part of a two-man midfield pivot.

Let’s take a look at some stats from the Champions League to gauge Kessie’s strengths. 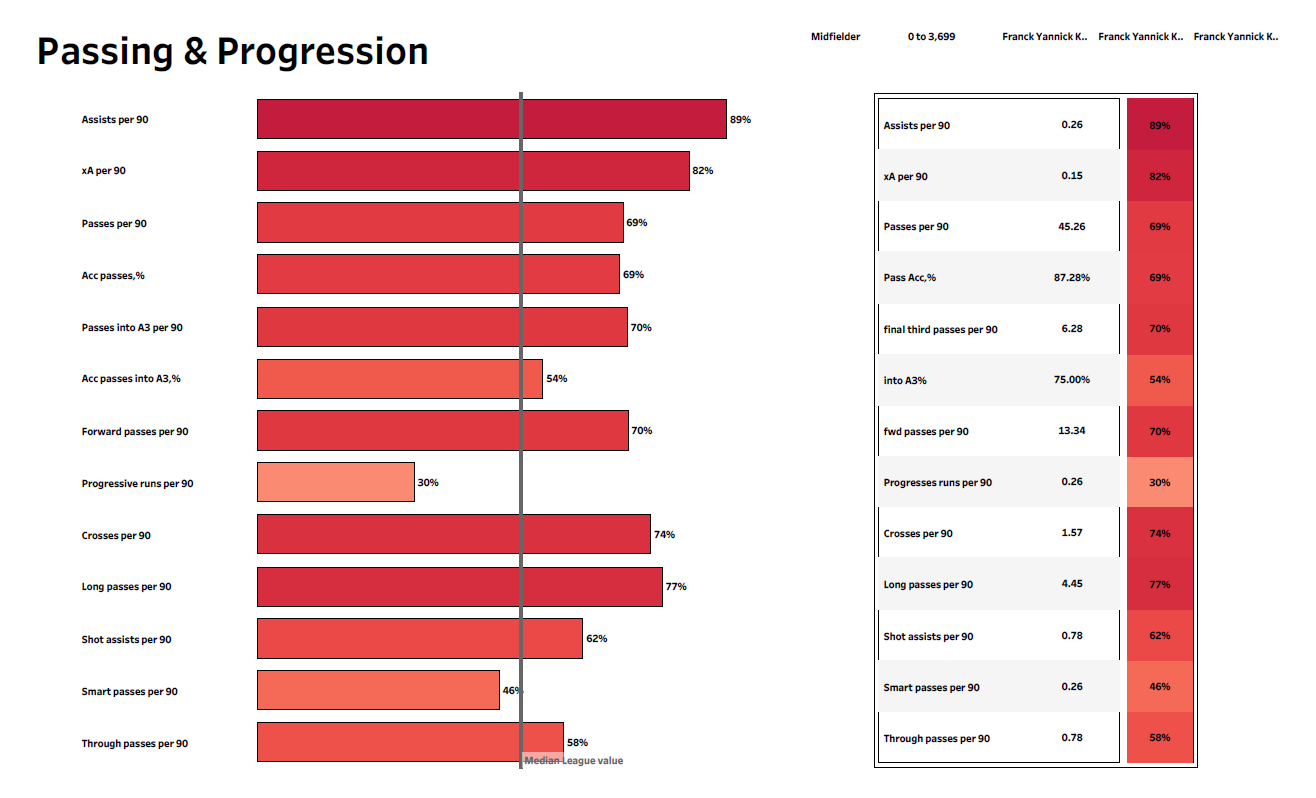 In the above viz., we can see Kessie’s passing and progression stats. The majority of his stats surpass the league median value. His most notable stats are assists per 90, expected assists per 90, and long passes per 90. Kessie possesses impressive build and body strength, an aspect that allows him to dominate duels in the midfield. He is excellent going into challenges and is difficult to shrug off the ball. Kessie displays accurate and adept passing, as indicated by the above stats. Kessie is a well-rounded player who is regularly involved in the build-up for his side. In addition, the midfielder possesses an eye for a goal and remains a goal threat near the opposition box. 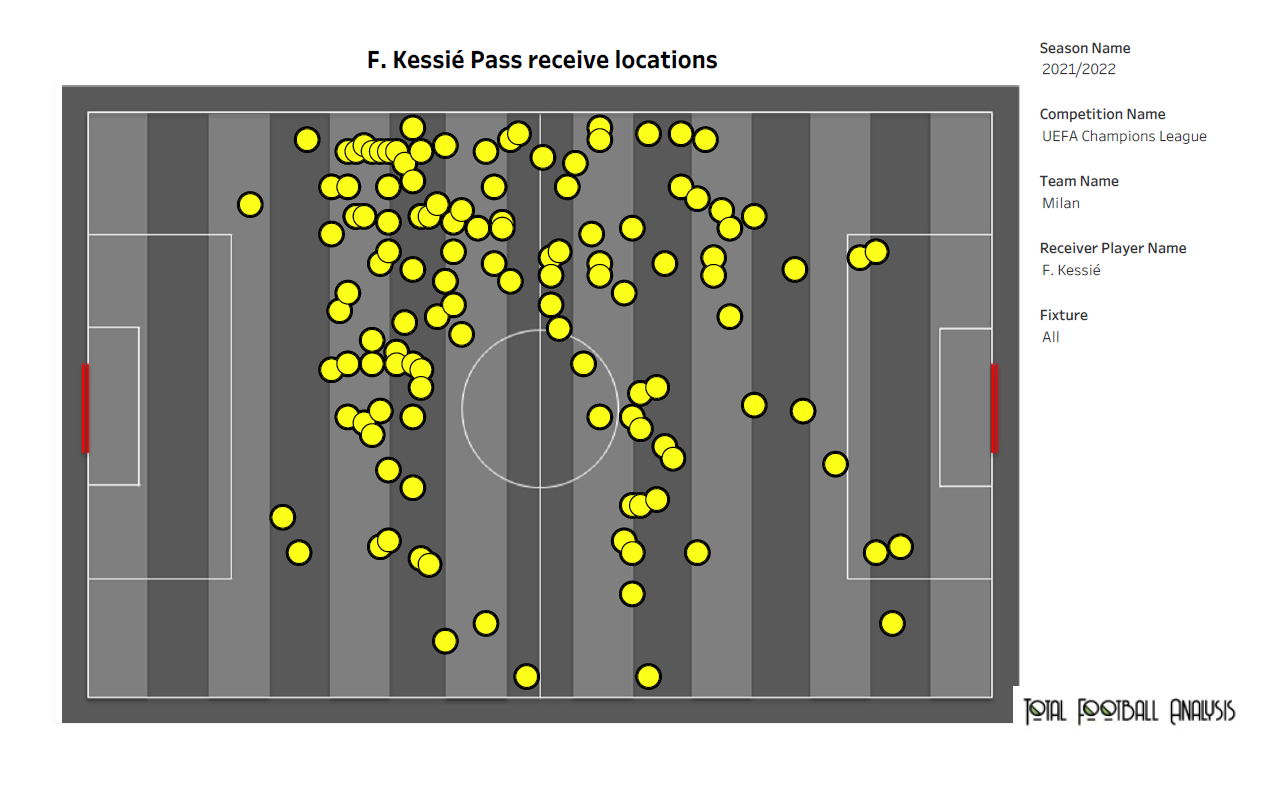 The above viz. highlights the areas where Kessie has dropped on the pitch to receive his passes. We can see that Kessie possesses impressive mobility on the pitch. He has dropped consistently in his half while also appearing regularly in the opponent’s half. Despite playing a deeper role since the last season, Kessie’s creativity has improved. 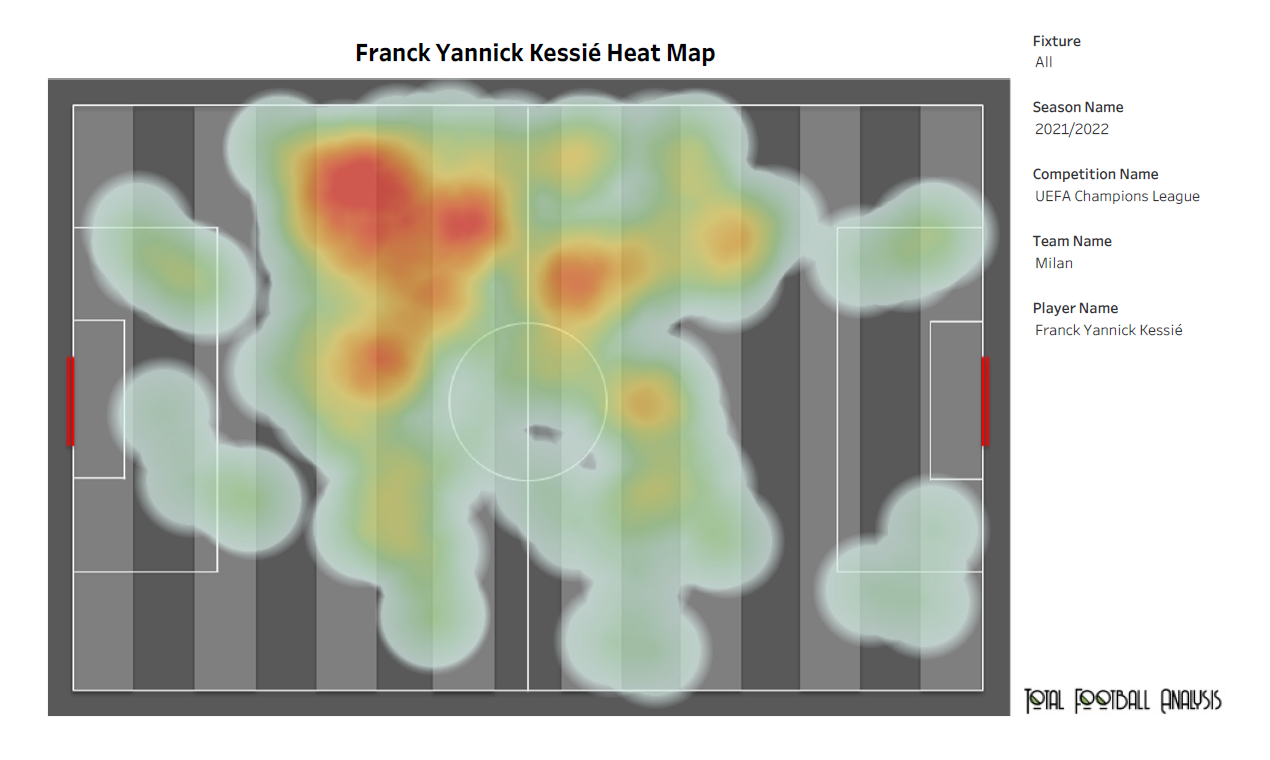 Kessie’s heat map highlights the locations of the pitch where he is most active. At AC Milan, Kessie has featured as part of a double pivot, alongside Sandro Tonali or Ismael Bennacer. Kessie is impressive in winning the ball back, while he constantly makes forward runs to support his team during the attacking phases. In the above viz., we can see his impressive work rate on the pitch. The red zones highlight his extensive presence in his half. He has also occupied the half-spaces in the opponent’s half.

Kessie could prove to be a brilliant signing for Conte as he could become a part of an impressive midfield double pivot along with Hojberg or Winks.