Tottenham Hotspur clinched the top-four spot ahead of their bitter North London rivals, Arsenal, on the last matchday of the 2021-22 Premier League season. While the arrival of Antonio Conte certainly played a part in this, he also managed to paper over the cracks of some positions at the Tottenham Hotspur stadium, most notably the right-back. While Emerson Royal has been allotted more minutes, he has been inconsistent in his performances. Meanwhile, Doherty has spent more than half of his games on the bench being injured or otherwise. One right-back that Tottenham Hotspur have been linked to signing is Nottingham Forest sensation, Djed Spence. In this article, we will have a look at the Englishman’s season for the Nottinghamshire-based outfit. 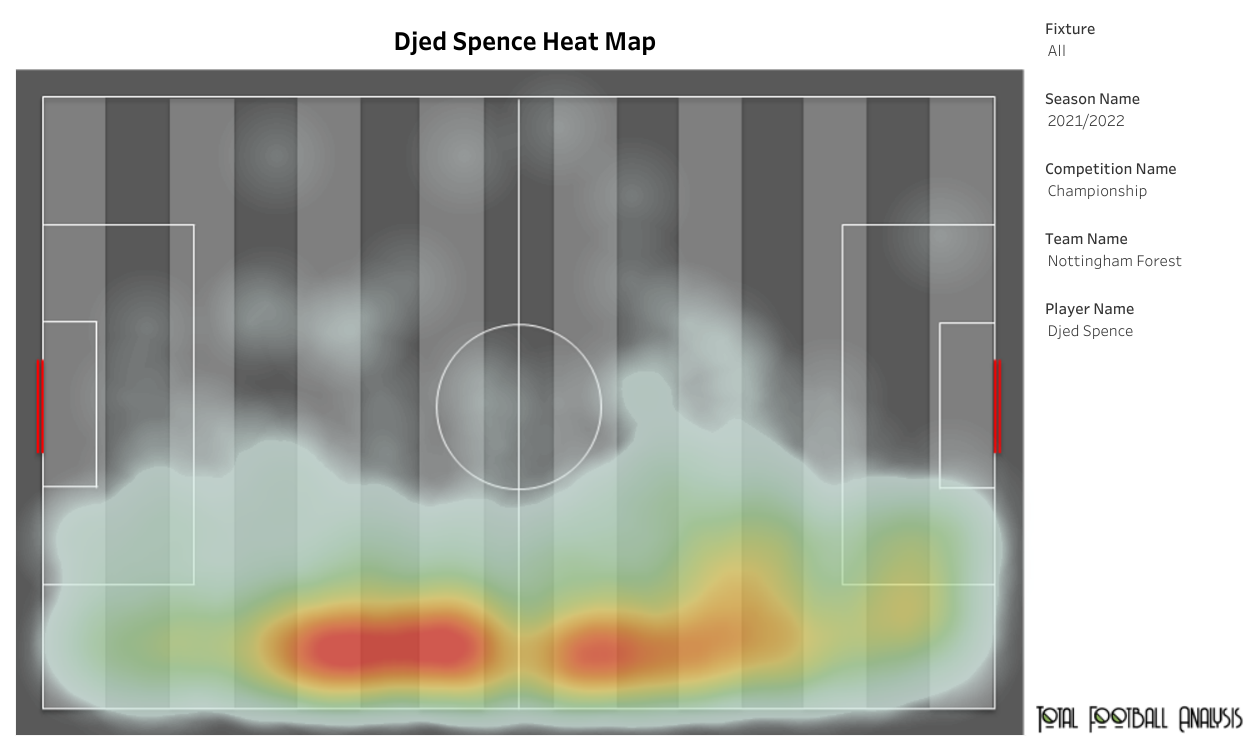 Spence joined Nottingham Forest on loan from Middlesbrough in the summer of 2021 and featured 42 times for them in the EFL Championship. The 21-year-old had a breakthrough campaign at the City Ground as he helped Forest earn promotion to the Premier League after a 23-year period. In the heat map shown above, Spence predominantly featured on the right wing as a full-back in a back four or as a wing-back in a midfield four or five. The Englishman had the stamina necessary for the role as he was required to bomb forward when attacking and prevent opposition wingers from penetrating the Forest defence. 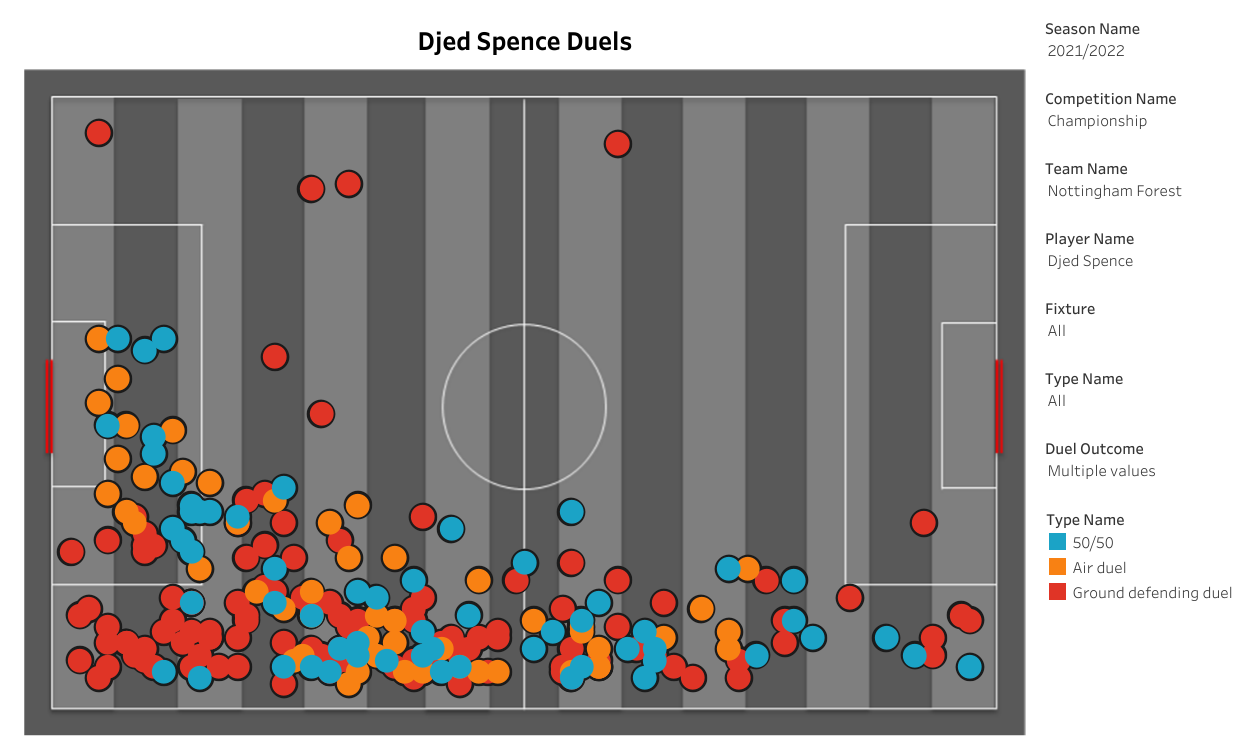 Seen above are the locations of the duels won by Spence in the 2021-22 EFL Championship season. Spence won a variety of duels for Forest this season, but the two types of duels he won the most were ground-based duels and 50/50s, both of which came more frequently than aerial duels. The majority of the duels the Englishman won came in the defensive third (outside the penalty box) and in midfield, while a few of them were successful in the final third as well. Spence won 103 tackles and interceptions, or 2.72 per 90. 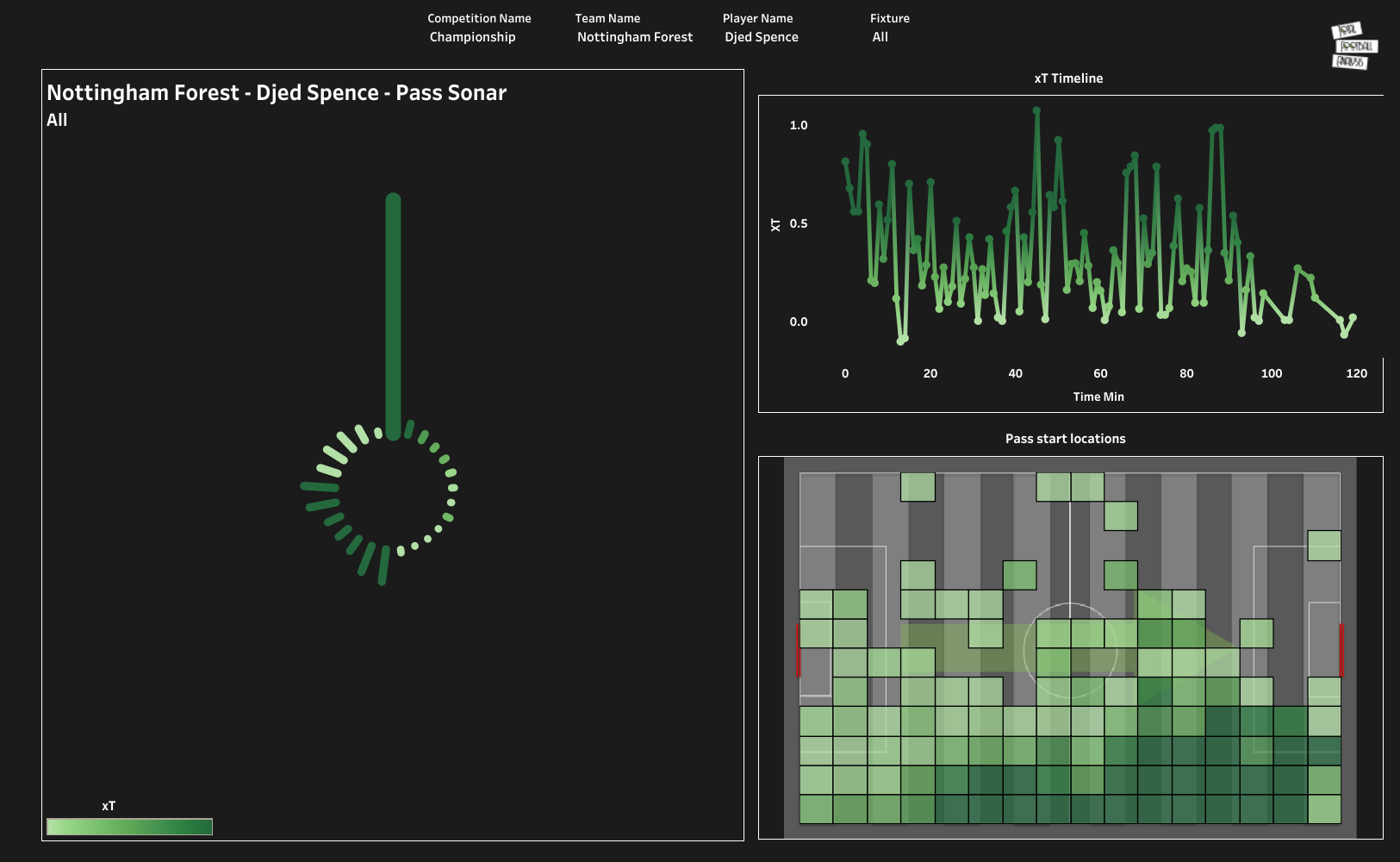 Shown in the above visual are the xT map, xT timeline and pass sonar of Spence for in the EFL Championship season just gone by. Based on the timeline, one can see that Spence regularly created an xT score of 0.5 or more, occasionally exceeding 1.0. The Englishman also completed 2.16 crosses per 90 into the penalty box. He drew more fouls (58) than he committed (32).

As of today, Djed Spence has returned to Middlesbrough after his loan spell with Nottingham Forest. But reportedly, the 21-year-old is close to signing for Tottenham Hotspur. Should the Englishman arrive, Tottenham could strengthen their top-four hopes yet again.