Multiple sources are reporting that Tottenham are close to finalizing a deal for Juventus winger Dejan Kulusevski. So far, Spurs have had to endure a frustrating transfer window as they have reportedly missed out on multiple transfer targets. The likes of Adama Traore and Luis Diaz have joined Barcelona and Liverpool, respectively. If a deal is finalized, Kulusevski could become Spurs first signing since the arrival of Conte.

It has been reported that the managing director of football at Tottenham, Fabio Paratici, is an admirer of the Swedish international, as this will be the second time that he has signed Kulusevski, having brought the winger to Juventus from Atalanta. Kulusevski, who signed for Juventus in January 2020, made his first appearance for the Old Lady during the 2020-21 season. His career at Juventus started well as he finished the season with 35 appearances in the Serie A, scoring six times and making three assists. In addition, Kulusevski was afforded six appearances in the Champions League as well. Despite showing glimpses of his quality last season, the 21-year-old has struggled to feature regularly under Allegri. Although he has made 20 appearances in Serie A, the Swedish international has started in only five games. In the Champions League as well, all five of Kulusevski’s appearances have come in the role of a substitute. Despite his young age, Kulusevski has made 20 appearances for the Swedish national team. The 2019-20 season was a breakthrough season for Kulusevski, as the winger scored 10 goals and registered eight assists at Parma.

Let’s look at his stats from his appearances in the Champions League to gauge whether the winger could provide depth and revitalize Conte’s attack. 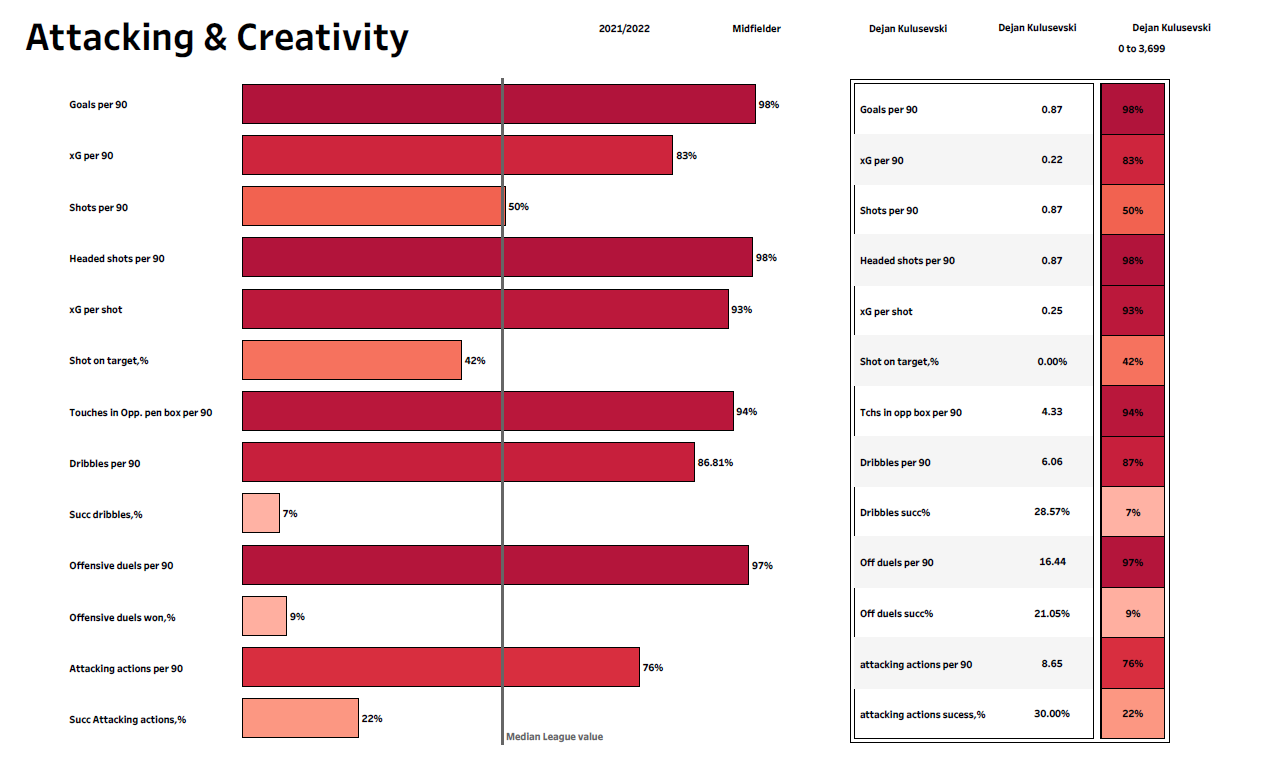 In the above viz., we can see Kulusevski’s attacking and creativity stats. Most of his stats surpass the league median value. His most notable stats are xG per shot, touches in the opposition penalty box per 90, and offensive duels per 90. Kulusevski possesses impressive technical ability, speed, and intelligence. He utilizes his acceleration effectively and can make progressive runs with the ball to threatening areas of the pitch. 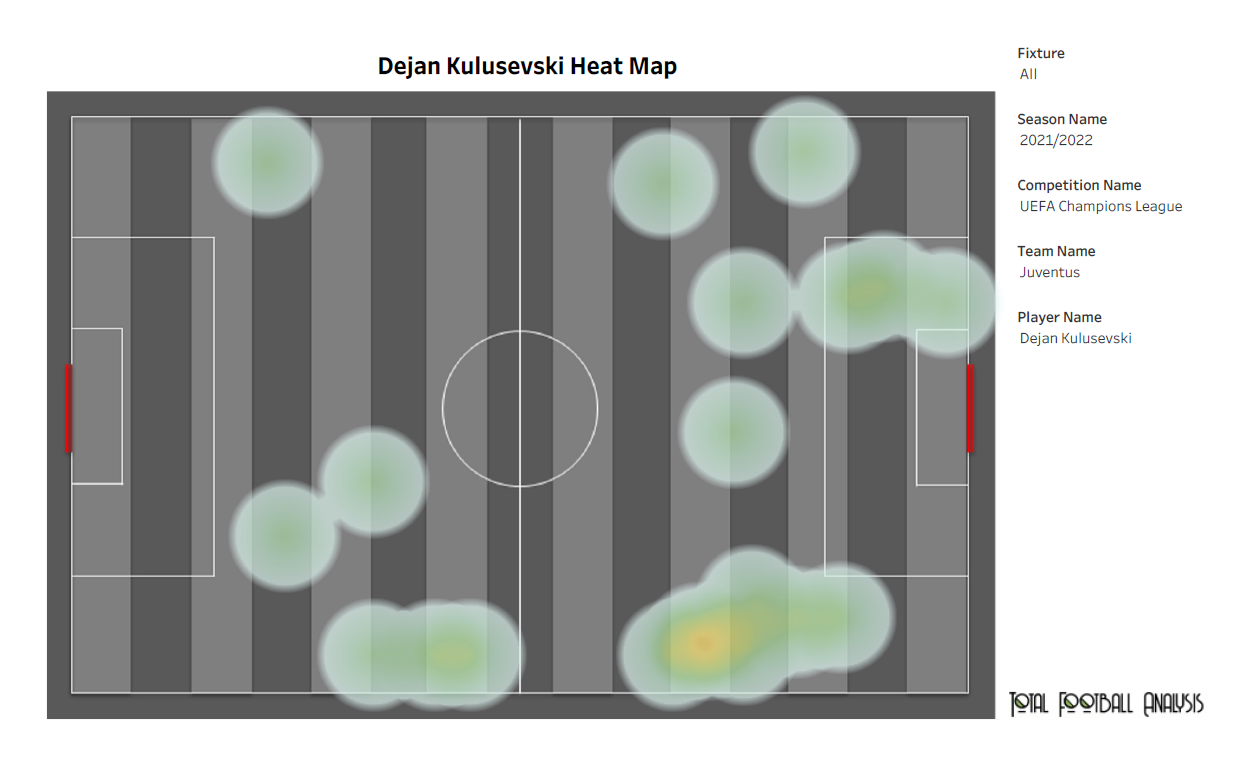 The above heatmap displays the locations on the pitch where Kulusevski was active during his substitute appearances in the Champions League. During his time at Parma, Kulusevski was deployed in multiple positions in the attack, as an attacking midfielder, inverted winger, and as a forward. At Juventus, Kulusevski has been usually deployed on the right side of the midfield and as a second striker. In addition, he has featured as a winger as well. Conte could deploy Kulusevski as a winger or as a wing-back in his 3-4-3/3-4-2-1 system. 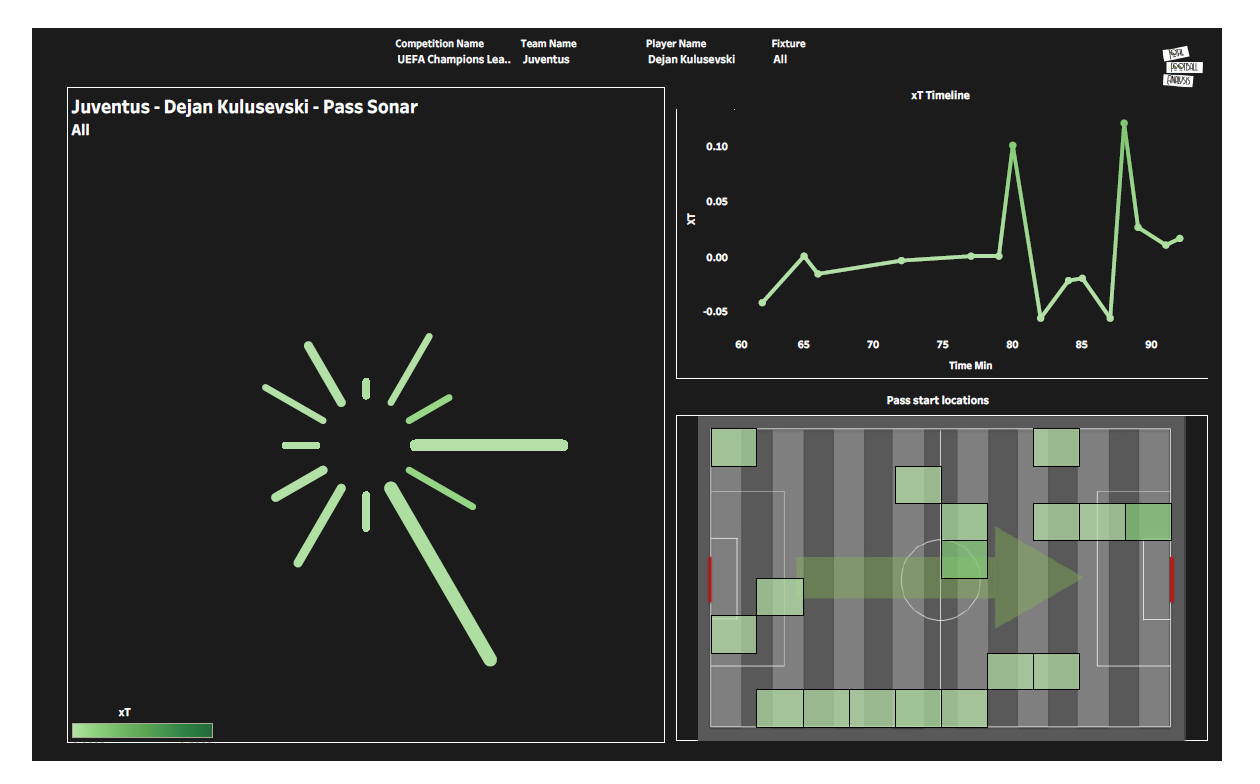 The above viz. provides a sense of the directionality of Kulusevski’s passes. We can also see the areas of the pitch where he has delivered his passes and the threat associated with those passes. Most of his passes from the right flank are directed backward due to his position while receiving the ball. He utilizes short and sideways passes to switch the play and releases the ball quickly to make the switch from the centre to the left wing.