Since taking over as Tottenham’s manager, Antonio Conte has improved his side’s defensive performances by leaps and bounds. The tactical changes brought forth by Conte have allowed Tottenham to plant their feet back in the Premier League. Under Conte, Spurs have conceded just four goals in eight matches in the Premier League. As a result, they are placed sixth in the Premier League, with 10 wins, three draws, and five losses in 18 games. In addition, they have two more games in hand than fourth and fifth-placed Arsenal and West Ham respectively. The Italian manager’s preferred back-three system has allowed defenders like Eric Dier, Ben Davies, and Davinson Sanchez to flourish in the role of centre-backs.

In Tottenham’s recent match against Watford in the Premier League, it was Sanchez who scored the winner in the 96th minute. The Columbian headed home the winner from Son Heung-min’s cross. He was solid at the back for the entirety of the match and was barely troubled during Watford’s counter-attacks.

Ahead of a tough January schedule where Tottenham are going to face Chelsea thrice, Sanchez has called upon his teammates to rally up and overcome the challenge. He has highlighted that his side needs to keep pushing and continue performing the way that they have been doing.

Let’s analyze his stats from the Premier League in order to understand how has he fared this season and under the new system.

So far, Sanchez has made 12 appearances in the Premier League with the majority of his stats surpassing the league median value. Sanchez has averaged upward of six aerial duels per match with a success rate of 52.94%. His other notable stats include recoveries per 90 and recoveries in the opponent’s half per 90. Sanchez is assured and calm in possession and is capable of retaining the ball. He is dominant in aerial duels, as indicated by the above chart, and his heading ability makes him a threat from set-pieces. The Columbian utilizes his body to his advantage and is strong in challenges. 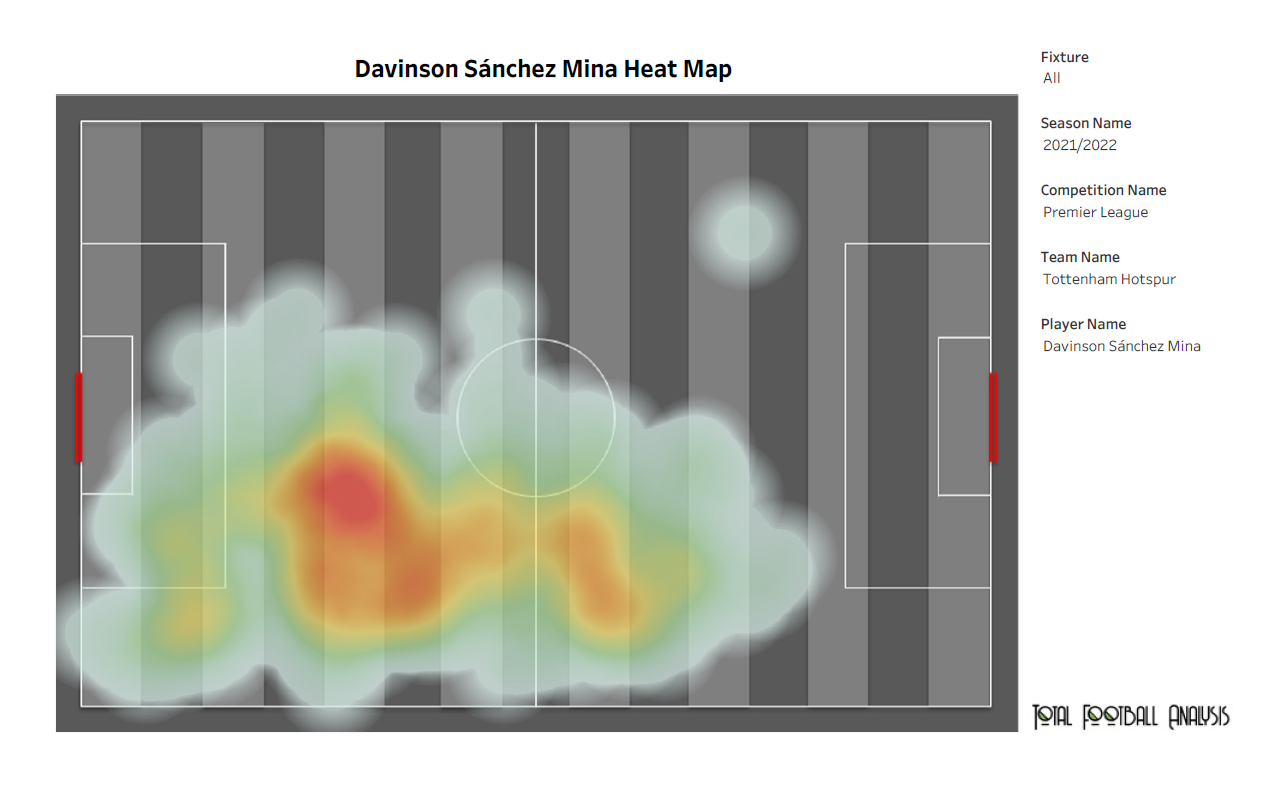 Sanchez’s heat map highlights the areas where he is most active on the pitch. In Conte’s 3-4-2-1 system at Tottenham, Sanchez has been deployed as a right centre-back. Conte’s teams focus on compactness more than pressure to block the central spaces and force on the opponents in wide areas. Sanchez possesses impressive speed that allows him to cover the ground quickly when his team is under pressure. The red zones indicate his extensive movement on the right side of defense while he has also moved higher up the pitch plenty of times. 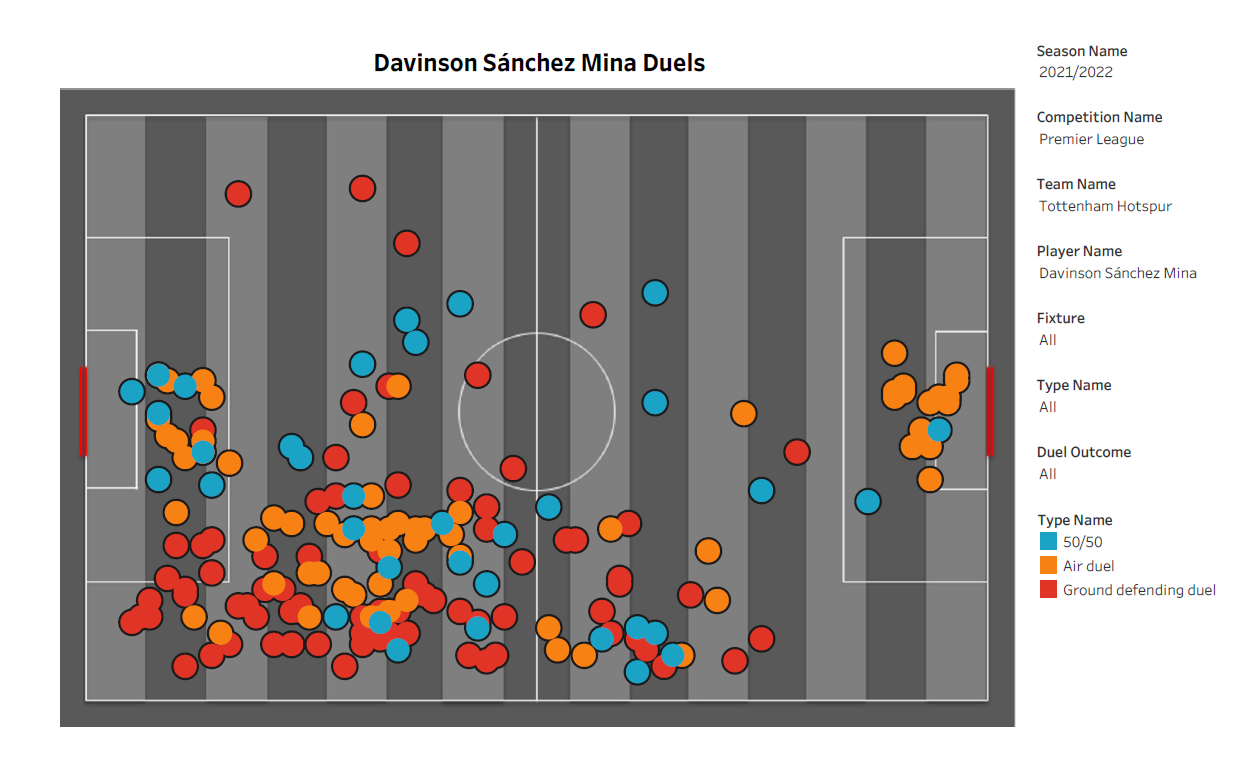 The above map displays the defensive and aerial duels that Sanchez has engaged in this season. Sanchez’s positional awareness allows him to position himself on the field appropriately, and he can utilize his strength and speed to put his opponents under pressure. So far, he has made 24 tackles and 14 interceptions while also winning 61 duels. The Columbian is also adept at stepping out of his defensive role and can contribute to the attack if needed. 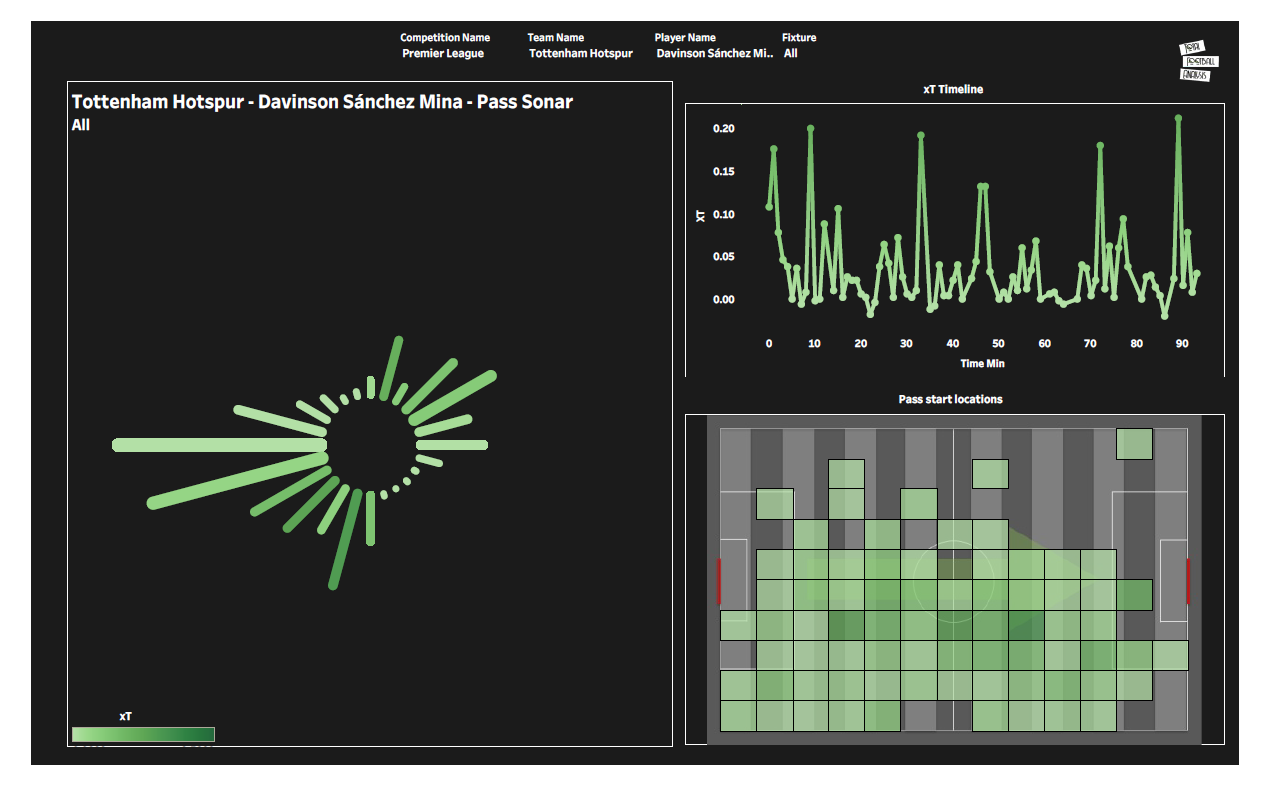 Sanchez’s pass sonar provides a directionality of his passes and indicates his influence on the movement of the ball. It also provides an idea of the typical length of his passes. His pass start location indicates that he has made most of his passes towards the right wing in the opponent’s half and half-spaces as well.

Sanchez has been one of the many players who has improved massively under Antonio Conte. In the absence of Cristian Romero, the Columbian has become a key player in Conte’s backline.

Transfer Talk: Clement Lenglet – Why do Tottenham want to sign the Barcelona defender?

Transfer Talk: Clement Lenglet – Why do Tottenham want to sign...

Transfer Talk: Christian Eriksen – Could the Dane make a return...