When Tottenham Hotspur signed Cristian Romero from Serie A team Atalanta on a loan deal in August 2021, there were big expectations from the Argentine. He had a very good 2020-21 season with the Bergamo team and an even better Copa America with Argentina, which La Albiceleste eventually won. Despite a slow start and a hamstring injury in November 2021, which ruled him out for two months, he cemented his place in the starting XI under Antonio Conte and often provided the steel to the Spurs’ defensive unit. 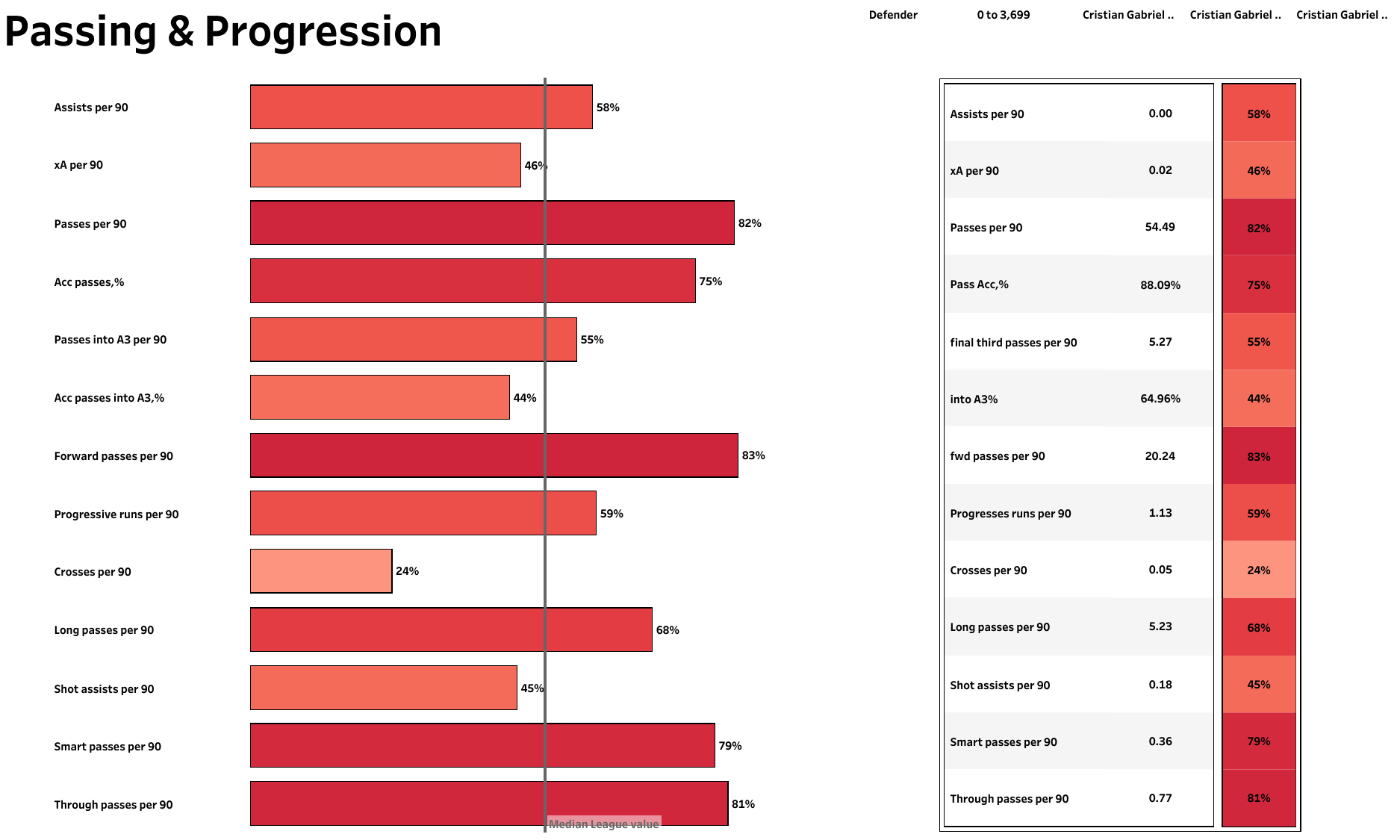 Romero made 30 appearances in all competitions for Tottenham Hotspur last season, of which 22 came in the Premier League. He played 1,845 minutes in the league, scoring once. He was active in the game, attempting close to 55 passes per 90 at a very respectable pass accuracy of 88%. The Argentine was decent in ball progression but not great, as he completed 65% of his balls into the final third of the 5.27 he attempted per 90. He completed above five long balls per 90, which put him in the upper third among defenders. He was also placed in the topmost quartile for smart passes per 90 and through balls per 90.

Romero might have been a good passer, but his defensive abilities and numbers are even better. He competed in 15.68 defensive actions per 90, winning 81% of them. As far as defensive duels are concerned, he was elite in both attempts per 90 (9.69) and percentage of successful duels (35.81%). In both cases, he ranked in the top 7% or higher among defenders. The Argentine had a pretty good aerial presence, winning nearly 59% from over four battles per 90. His 60.34% loose ball recovery rate placed him in the upper 14%. With over 12 recoveries per 90, he put himself in the 91st percentile. However, his biggest flaw was his rashness on the field as he committed 1.22 fouls per 90 and received a booking once in three games. 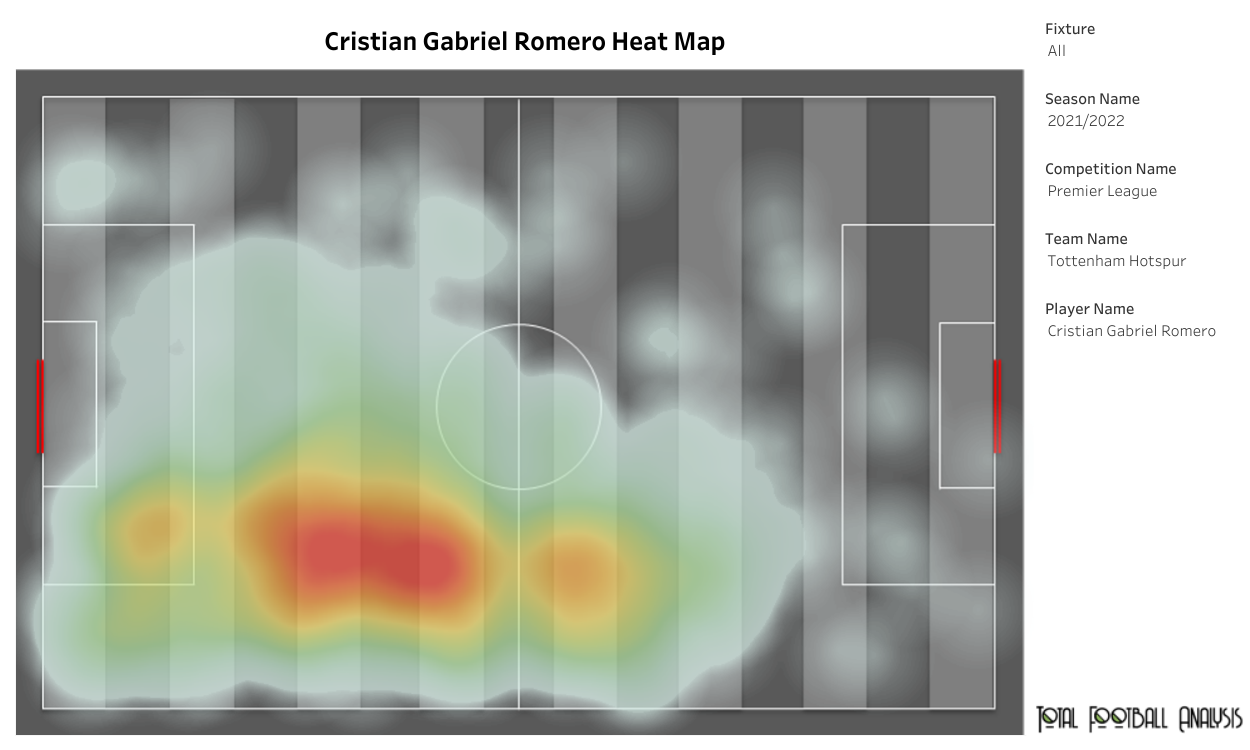 Romero was highly involved in the defensive third of the pitch for Tottenham, stopping threats created by the opponent attackers. He provided cover for the right-back whenever the latter advanced high up the field. He was decent as a ball-playing centre-back as he completed 2.54 progressive passes per 90 and 2.83 balls into the attacking third per 90. But he ranked very high in his ability to carry the ball as he made 3.86 progressive carries per 90 and 1.02 carries into the final third per 90. 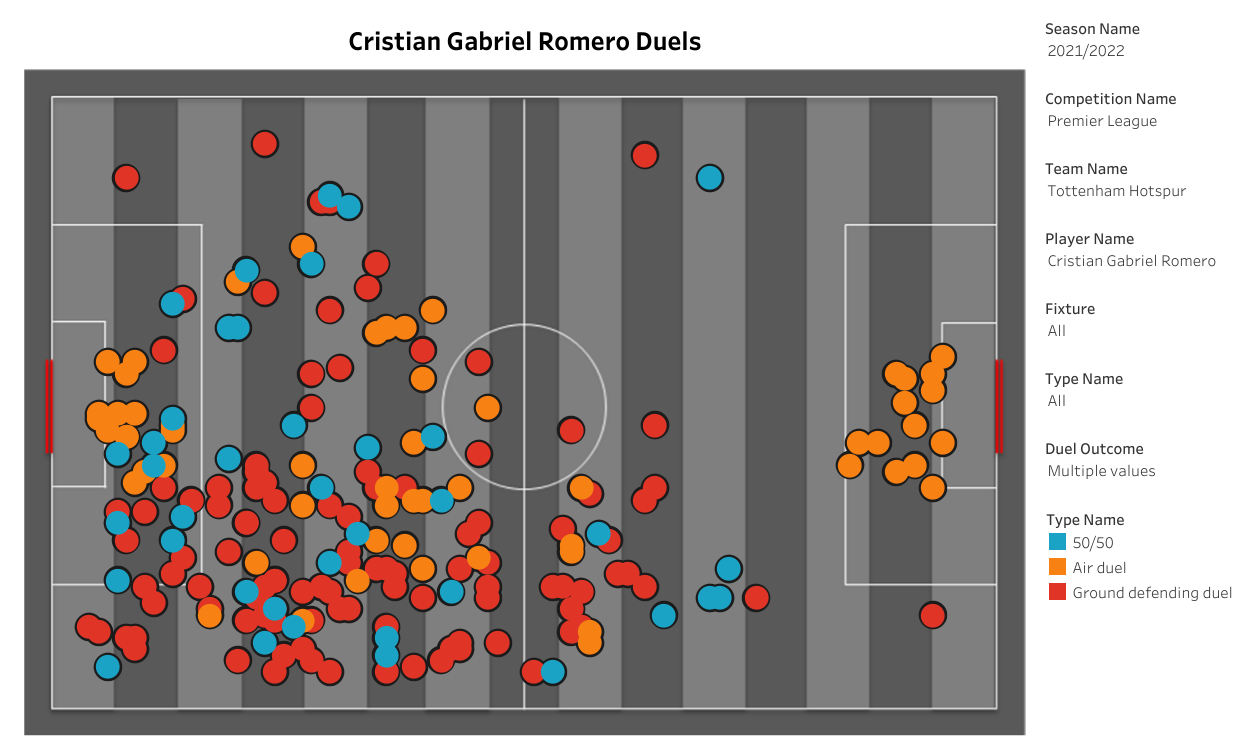 Romero won the vast majority of his duels in the defensive third, and some of these came in the midfield as well. He succeeded in quite a few aerial duels in the penalty box, mostly from set-pieces. He attempted 15.5 pressures per 90, an astonishing 6.44 tackles and interceptions per 90, 3.8 clearances per 90 and 2.44 blocks per 90.

Cristian Romero has adapted to the Premier League very well since his arrival from Atalanta last summer. With Antonio Conte building a highly competitive team, one can expect the Argentine to be more important to the team’s defensive department.