The previous summer saw Argentinian centre-back Cristian Romero move to Tottenham from Atalanta on loan. Romero rose through the ranks of Belgrano in Argentina and eventually made his debut for the club in 2016. Following his spell at Belgrano, Romero joined Genoa in 2018 and made 27 appearances in the Serie A. The Argentinian then signed for Serie A giants Juventus in the summer of 2019, but they loaned him back to Genoa immediately on a season-long loan. The centre-back continued his strong performances and finished the season with 30 appearances in Serie A. In 2020, Romero joined Atalanta on another loan move and went on to make 31 appearances in the league. His performances throughout the season were brilliant, and he was awarded best defender in the Serie A for the 2020-21 season.

After his spell in Italy, Romero made his way to North London on a season-long loan deal with an option to buy. Following a slow start, Romero cemented his place under previous manager Nuno Espirito Santo and continued to be counted upon by the new manager, Antonio Conte. However, his progress at Spurs was halted as he got injured during international duty after featuring just twice under Conte. It has been reported that Conte sees Romero as an important player for his back-three system.

In a recent interview, Conte revealed that the Argentine defender is nearing his return and is expected to be back after the international break. Although Tottenham have been performing well since Conte’s arrival, their defense could use a player of Romero’s caliber. Tottenham’s recent form in the league has seen them climb up to the fifth spot in the table with 11 wins, three draws, and five losses in 19 matches. In addition, they have three games in hand over fourth-placed West Ham and are separated by a single point. 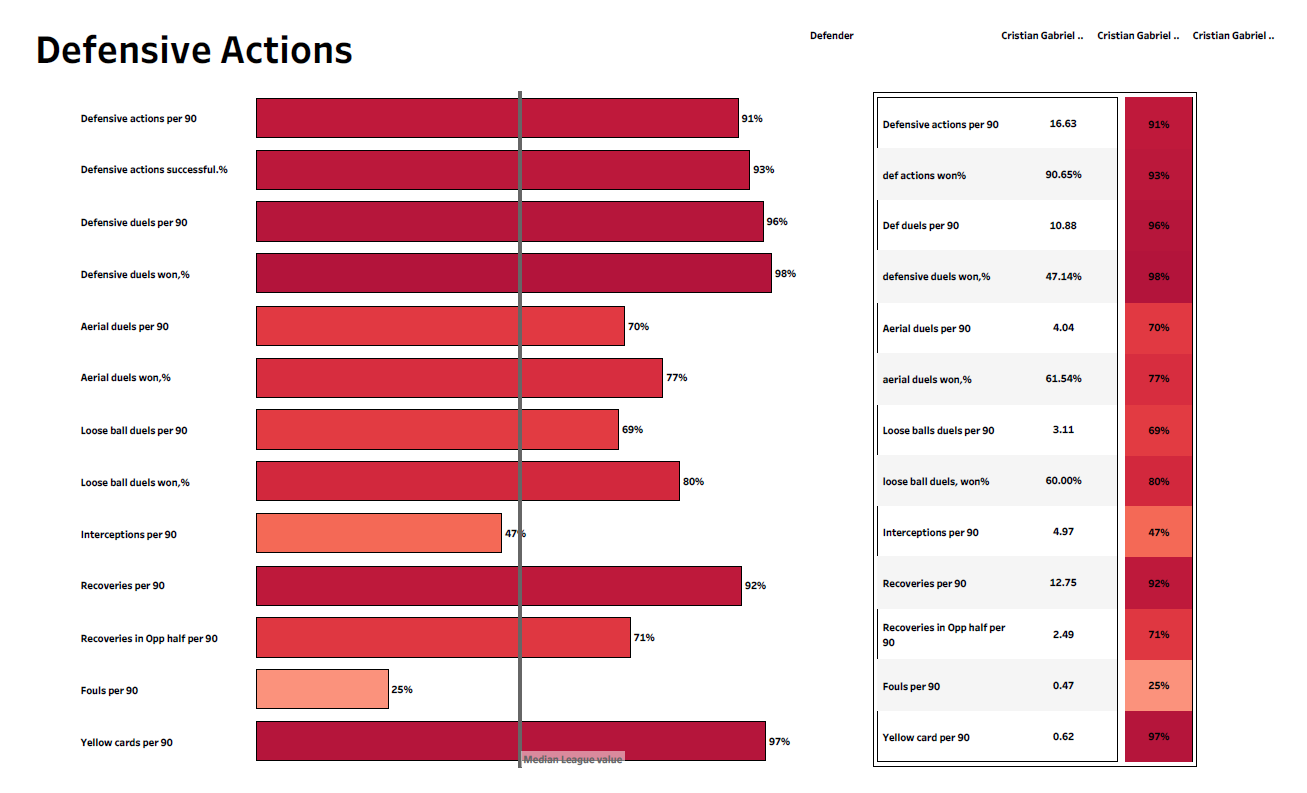 The above viz. displays Romero’s defensive stats in the league. So far, the Argentine defender has made seven appearances in the league. Romero was one of Spurs’ standout performers during their struggle at the start of the season. The majority of his defensive stats surpass the league median value. His most notable stats are defensive duels per 90, successful defensive actions, and recoveries per 90. Romero has averaged upward of 12 recoveries per match while also engaging in more than 10 defensive duels per match. Romero is a physical defender who excels at reading the game and anticipating the opposition attacks. He also possesses impressive strength and aerial ability. 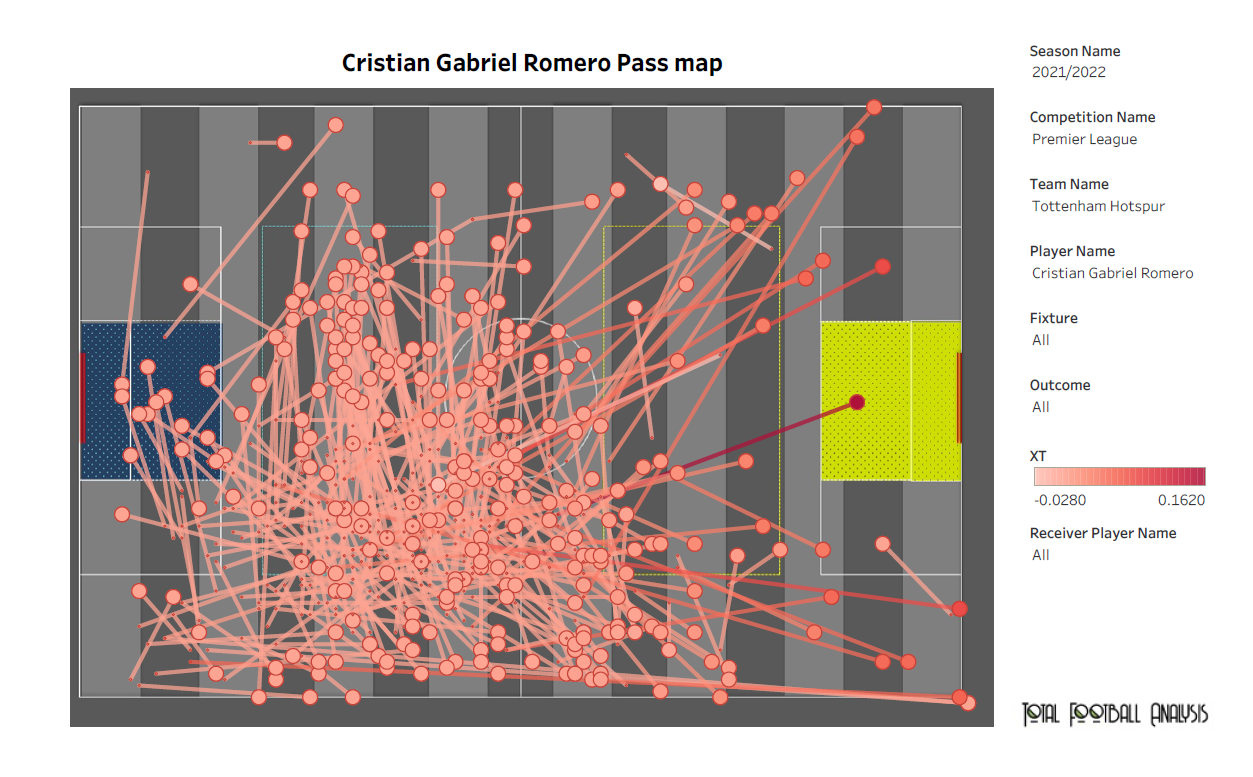 The above viz. displays a wide array of passes that Romero has delivered this season. We can see his various short and long passes in multiple areas of the pitch. Romero is technically adept and can dribble past the opponent if required. The defender is usually involved in the build-up play for his side and looks for a passing option further up the pitch as soon as he receives the ball. In the above map as well, we can gauge that he has made multiple diagonal and long passes in the opponent’s half. 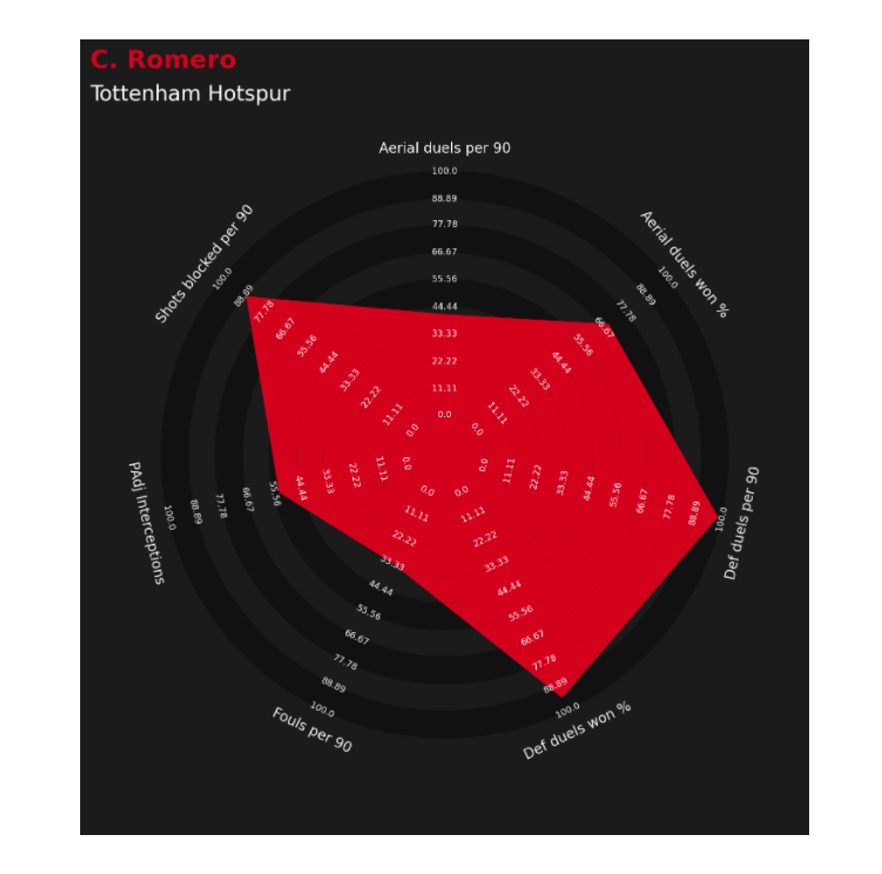 The above viz. further highlights Romero’s strong defensive attributes. Romero’s positioning and movement make him strong in blocking the ball, and he can utilize his large stature to great advantage. In the above viz. as well, we can see that he ranks highly in terms of average shots blocked per match. During his time at Genoa, Romero was deployed on the right side of a three-man defense. Conte could deploy Romero in a similar role as a right-centre-back, with Dier and Davies accompanying him. 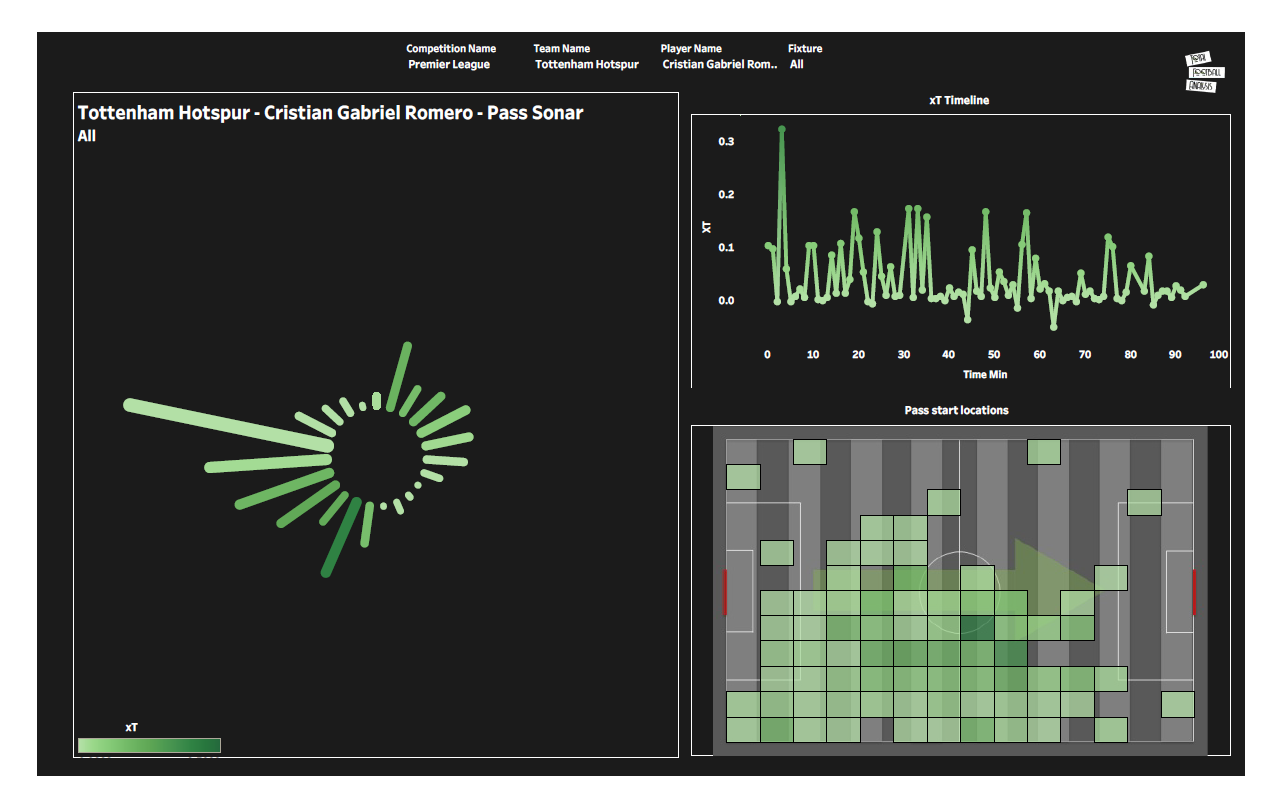 Romero’s pass sonar and pass start location provide a sense of the directionality of his passes. The Argentine is a capable passer of the ball and currently averages 48 passes per match.

Romero’s return would be a massive boost for Conte who would prefer depth in his backline with upcoming difficult fixtures on the horizon. The Argentine’s stats indicate that he has all the tools to become a mainstay in Conte’s backline.