Tottenham Hotspur qualified for the next season of the UEFA Champions League after clinching the fourth spot on the final matchday of the season. To compete in the four competitions next season (Premier League, UCL, EFL Cup and FA Cup), Spurs need depth in the squad across all departments, especially their midfield. Recently, the North London team registered interest in signing the Coventry City attacking midfielder, Callum O’Hare. With that in mind, we will have a look at O’Hare’s profile. 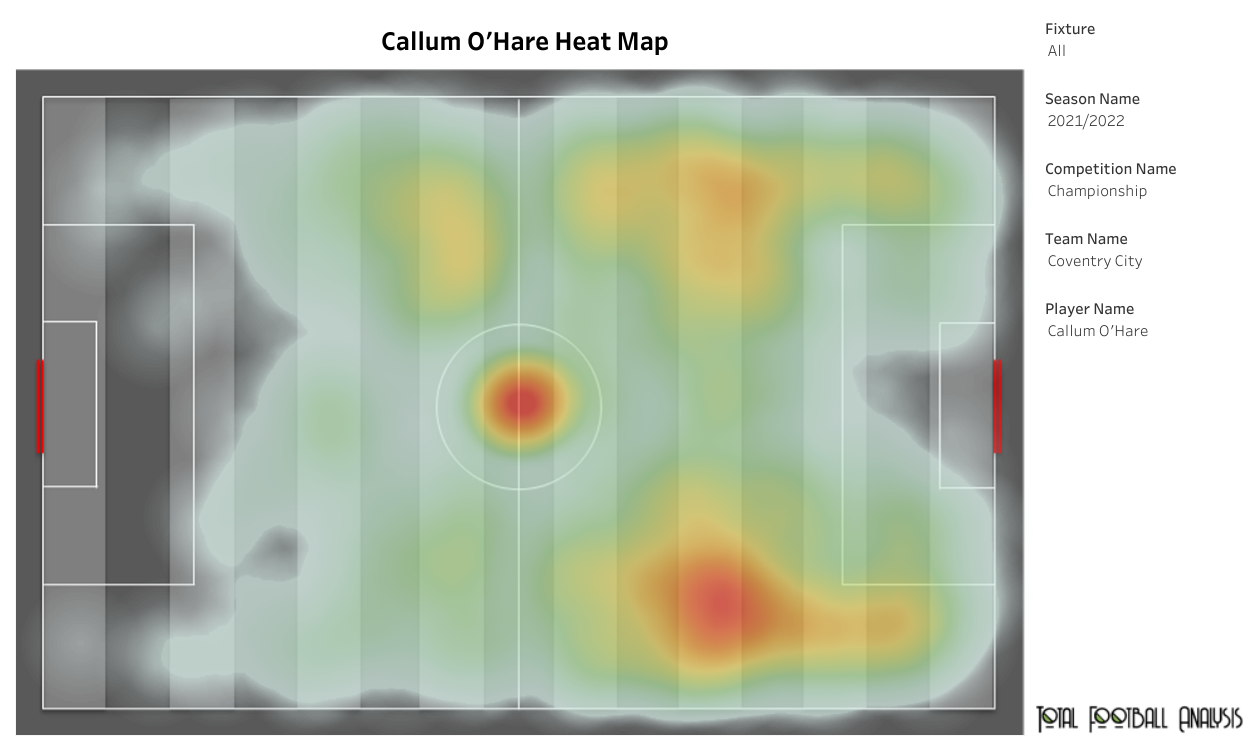 O’Hare made 45 appearances for Coventry City in the EFL Championship season just gone by. He played a total of 3,804 minutes in the second tier for the Sky blues. During that play time, the Englishman, who is also eligible to play for the Republic of Ireland, registered 13 goal involvements (five goals and eight assists). This means O’Hare was involved in a goal every 292 minutes. As shown from the heat map above, the 24-year-old has shown his versatility by playing across the front line behind the striker, playing as an attacking midfielder, right winger and occasionally, even on the left flank. 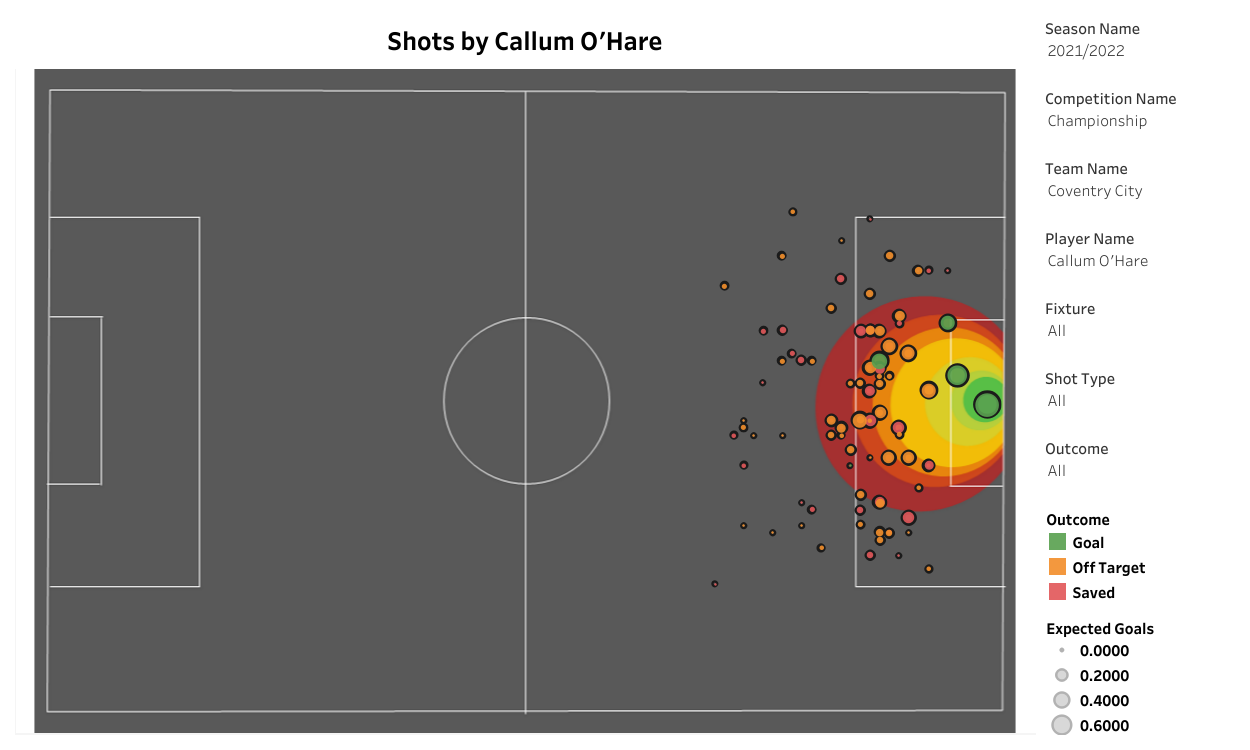 The above viz shows O’Hare’s shot map in the 2021-22 EFL Championship season. Only one out of his five goals came from outside the box, and that, too, was just outside the 18-yard limit. The vast majority of the shots taken by O’Hare came from inside the penalty area of the opponents. The 24-year-old hit 36.3% of his shots on target, with 33 out of 91 testing the opposition goalkeepers. As a result, O’Hare’s conversion rate stood at 18.2 shots per goal, which is not very efficient, to say the least. 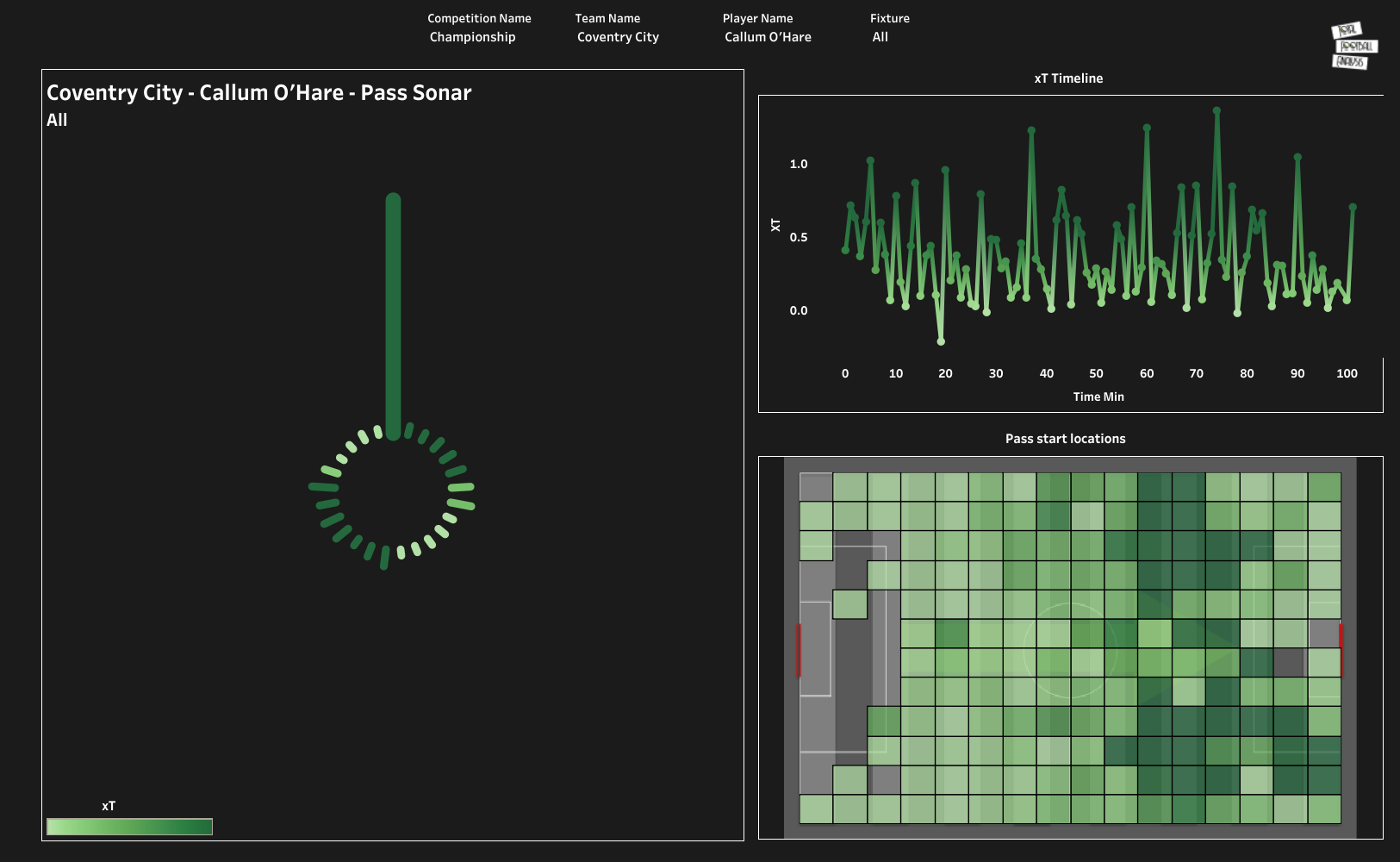 The above viz shows the xT timeline, xT map and pass sonar of O’Hare in the recently concluded EFL Championship season. He consistently created an xT score of 1.0. As seen from the map, he has consistently generated threat from both the flanks, cutting in whenever required. He has produced threat from progressive passes, progressive carries, passes into the final third, carries into the final third, passes into the penalty area as well as carries into the penalty area.

If Callum O’Hare joins the Tottenham Hotspur squad this summer, it will be specifically only for reliable depth, as he is extremely unlikely to dislodge Bentancur and Hojbjerg in midfield, and the attacking trio of Dejan Kulusevski, Harry Kane and Son Heung-Min.