Although the January transfer window has been well underway, Tottenham are yet to make a deal. Since he was appointed the manager, Antonio Conte has highlighted in multiple interviews his desire to improve the quality of his squad. There have been talks of the departure of Tanguy Ndombele, Dele Alli and Steven Bergwijn. However, there are still no concrete deals. In terms of squad reinforcements, Tottenham have been linked heavily with a move for Wolves winger Adama Traore. Spurs made an effort to sign the winger last summer as well under the management of former Wolves manager Nuno Espirito Santo. Conte is reported to have been interested in continuing Tottenham’s pursuit of the Spanish winger, seeing him as a wing-back.

With Emerson Royal currently underperforming in the role of wing-back, Traore could offer more attacking threats from that position. The winger, who is valued at £20 million, could provide Conte with the creativity and work rate that he seeks in the right wing-back position. Traore’s contract expires in 2023, and Wolves are reportedly willing to listen to offers upward of £20 million. With Barcelona also reportedly in the run to sign their former academy product, Spurs would need to move fast if they are to secure the services of the 25-year-old winger.

Traore has made 19 appearances in the Premier League this season, scoring just one goal. Although Traore is not a wing-back by trade, reports have claimed that Conte could transform him into one, similar to what the Italian manager did during his time at Chelsea with Victor Moses.

Let’s dive into some stats to gauge whether Traore would be a good fit in Conte’s wing-back system. 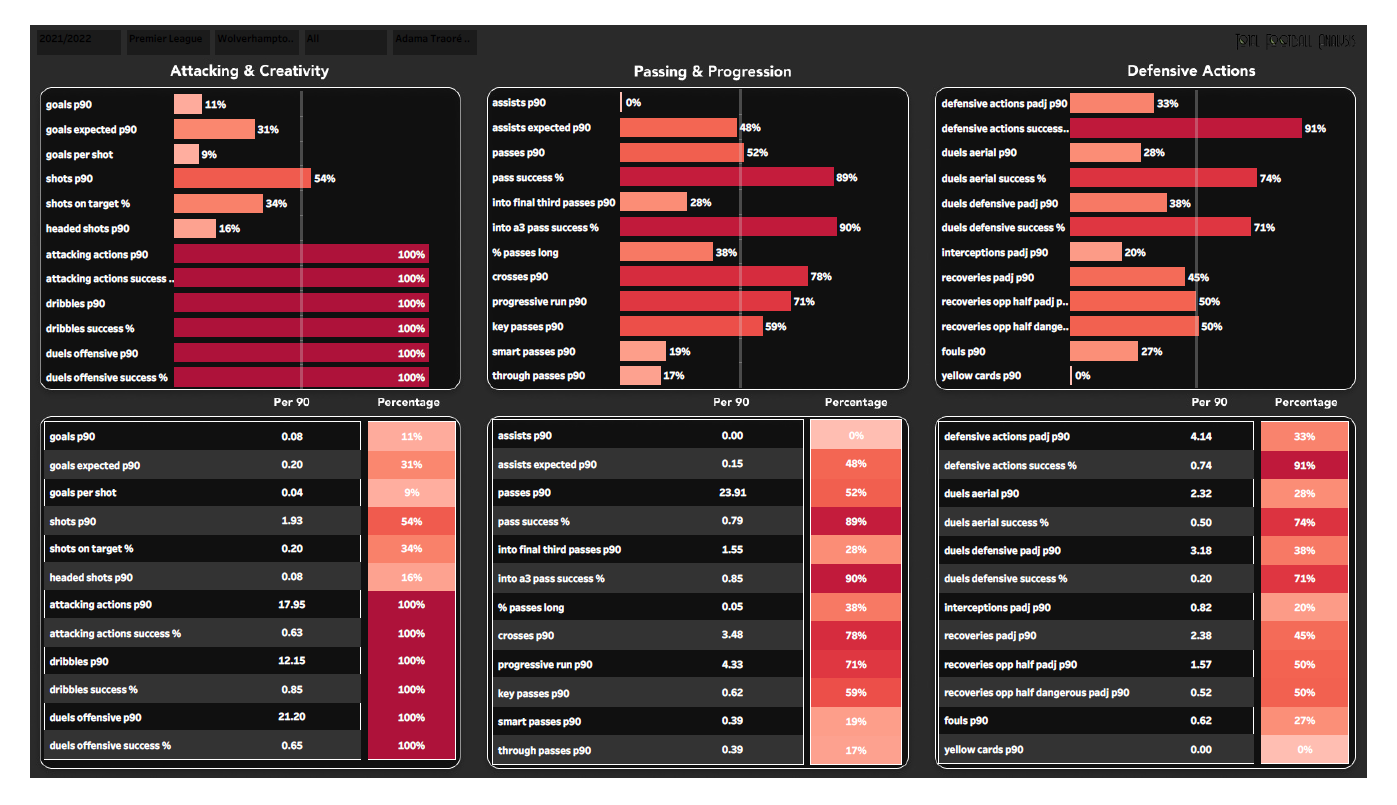 In the above viz., we can see an overview of Traore’s attacking & creativity, passing & progression, and defensive stats. Traore ranks amongst the best in terms of dribbling ability and taking on opponents. Only a handful of players in the Premier League can match Traore in terms of his dribbling success rate. The majority of his attacking & creativity and passing & progression stats surpass the league median value as well. While Traore excels at taking on the opposition defenders, it is the end product where he often lacks, as indicated in the above viz. The wingers’ goal contribution leaves a lot to be desired. Despite his low goal contribution, Traore this season has displayed his awareness on the pitch when he is in possession. Instead of attempting to run the ball off the ground, Traore has tried to pick out a teammate, a scenario in contrast with previous seasons. 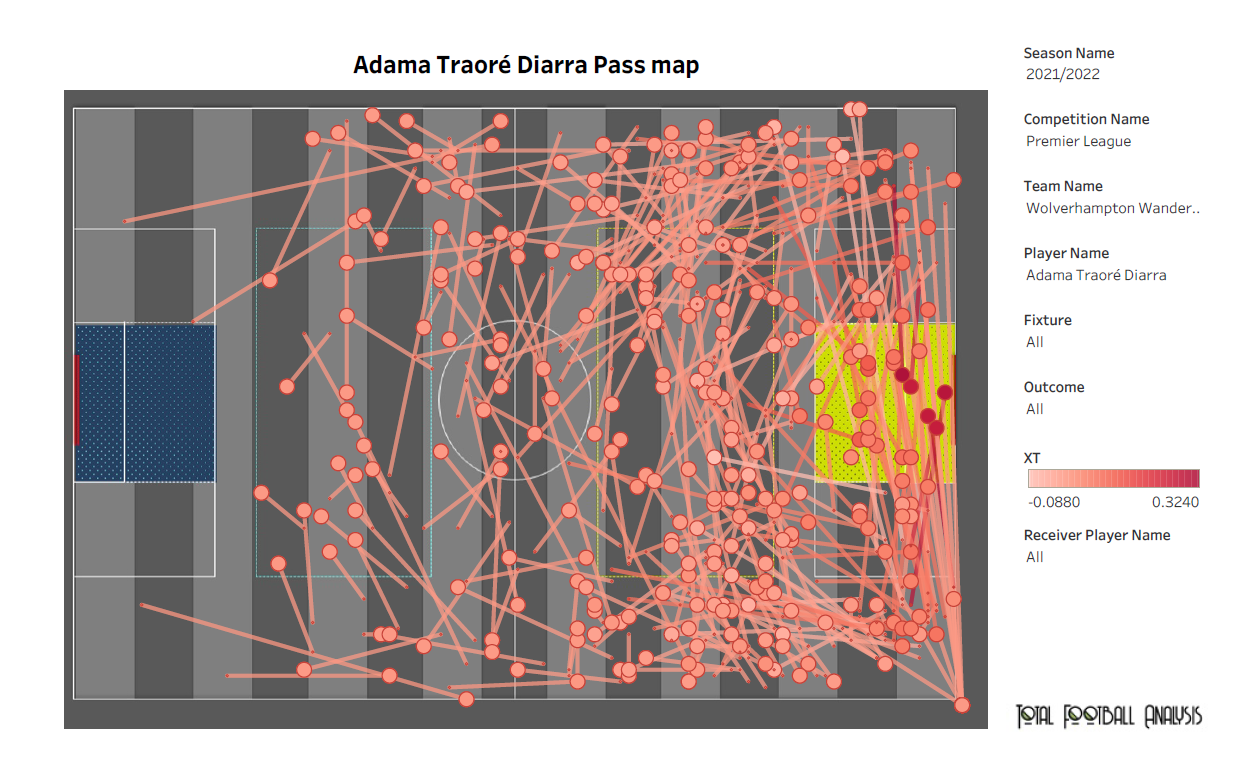 Traore’s pass map highlights the wide array of passes that he has delivered. From the above map, we can see his many threatening crosses into the opposition box from both the left and right wings. Conte could deploy Traore in the role of right-wing back in the 3-4-2-1 system. Traore’s excellent dribbling ability means that he could stretch out the opposition defense and create space for other forward players. The winger would also be particularly effective during the transition phases of the game, where he could utilize his explosive speed and dribbling ability to shake off his marker and carry the ball forward into the attacking third. 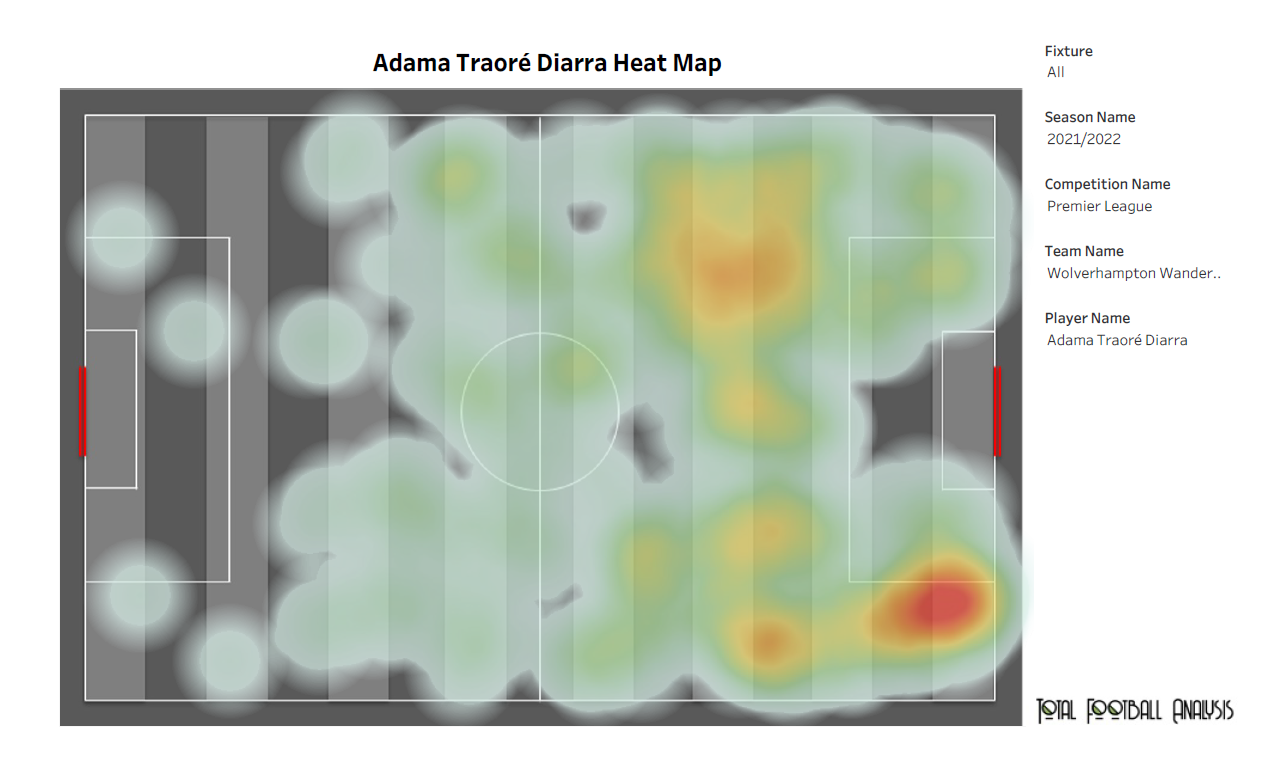 The above map indicates the areas of the pitch where Traore has been most active. Bruno Lage has deployed Traore on the right side of his 3-4-3 formation. The red zones highlight Traore’s activity on the right wing. In the past, the winger was often passive in his defensive work rate. However, Traore in the recent games has improved his pressing numbers, displaying an impressive work rate. Conte’s system depends heavily on the work rate of wing-backs as they have to track up and down the pitch constantly. Traore would need to continue to improve his work rate off the ball if he is to fit in Conte’s wing-back system. 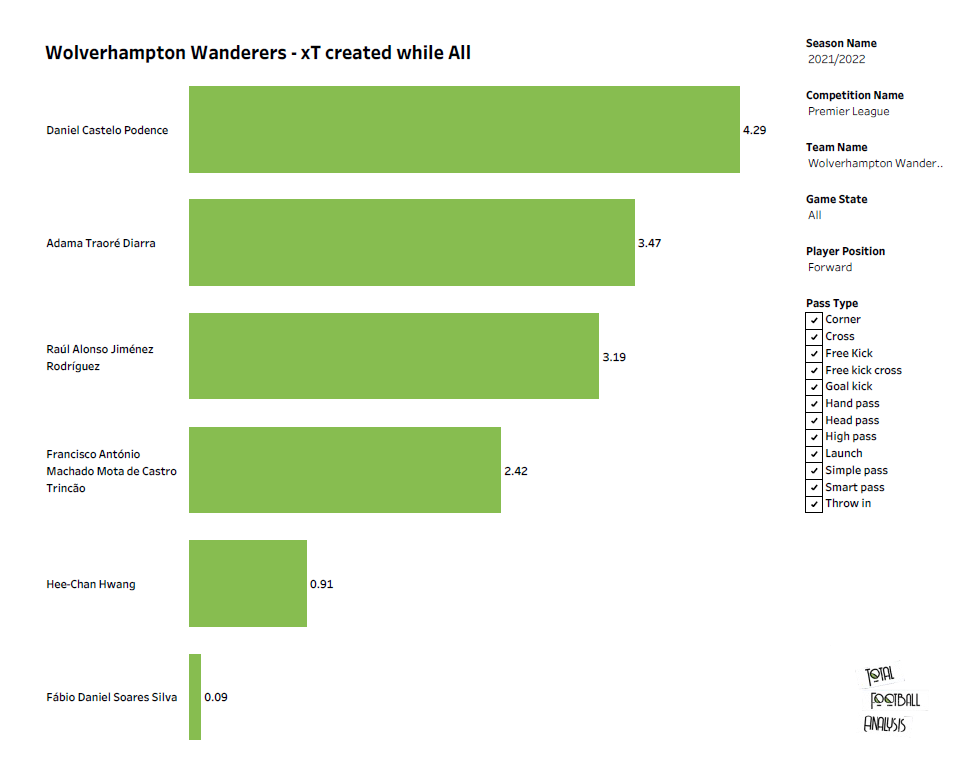 Traore could provide the threat and creativity that Conte seeks from his wing-backs. However, the Italian manager must find a way to utilize the winger’s explosive pace and dribbling ability whilst improving his work rate, which could possibly be a hurdle.